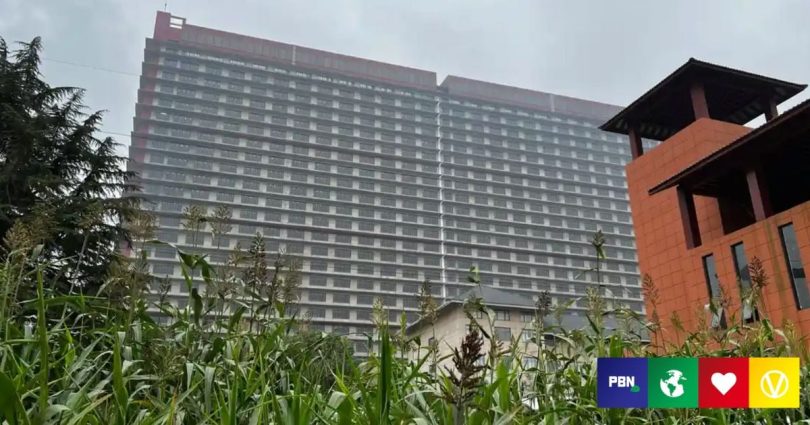 A 26-story indoor pig farm is now operating in the Hubei province of China. The facility is being labeled an environmentally friendlier approach to meat production. However, experts have warned of increased zoonotic disease risk, alongside ethical concerns.

The facility is the largest of its kind in the world. It is said to have capacity to slaughter up to 1.2 million pigs per year. It has been built to address China’s growing demand for pork, which remains the most popular meat in the country.

Farming in the building began in October, when almost 4,000 female pigs were brought in. When fully operational, the facility — plus a near-identical second building sat behind it — will be able to house 650,000 animals combined.

From cement to pigs

The company behind the farm – Hubei Zhongxin Kaiwei Modern Farming – is new to the pig sector. It was previously invested in China’s cement industry until construction and cement saw a downturn in profitability. Subsequently, it looked to animal agriculture for new revenue and used its own materials to construct the mega farm.

The structure is highly automated and being touted as an environmentally friendly endeavor. The factory will process and reuse pigs’ waste to make biogas, a mixture of gases that can act as a renewable energy source, thus powering the farm itself. It has also been claimed that the skyscraper-style farm model is more land-efficient and bio-secure.

The latter is a matter of urgency for China. The country saw millions of pigs culled as a result of the 2018 African swine fever outbreak. This plunged the country into a food security crisis that has left it grappling to recover its domestic pork production ever since. However, experts have commented that less meat is the key to building a sustainable future, not intensifying its manufacture.

“This is worrying news from China,” Nick Palmer, head of Compassion in World Farming UK told Plant Based News.

“Rather than developing new ways to produce more animal products to satisfy ever-growing demand, we all need to be consuming less but better meat, fish, and dairy. In a world of growing climate, nature collapse, and pandemic emergencies, we should be working to end factory farming, not designing and building even more intensive mega farms.”

Despite China’s Ministry of Agriculture and Rural Affairs signing off on high-rise pig facilities, environmental experts have questioned the move.

Some have acknowledged that closed buildings could limit interactions between wild and farmed animals. However, they also hypothesize that should an infection find its way into a high-rise plant, it would spread without prejudice.

Dirk Pfeiffer, chair professor of One Health at City University of Hong Kong, spoke to the Guardian about the matter. “The higher density of animals, the higher risk of infectious pathogen spread and amplification, as well as potential for mutation,” Pfeiffer said.

“The probably even more important question will be whether this type of production is consistent with the need to move towards reduced meat consumption, considering the apparently unstoppable threat of devastating climate change.”