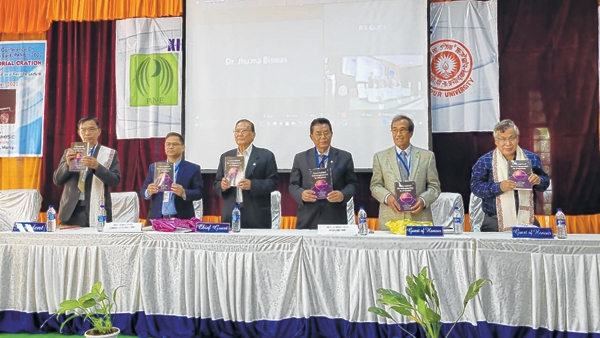 By Our Staff Reporter
IMPHAL, Nov 8: Former Vice Chancellor of Manipur University, Professor C Amuba has called for the modernization of Physics curriculum in higher education by barring/excluding the overloaded contents.
He was speaking as the chief guest in the inaugural session of the 3-day long 13th Biennial National Conference of Physics Academy of North East (PANE), 2022 which began today at the Court Hall of Manipur University.
The conference is being organized by the Department of Physics, Manipur University and sponsored by the Science and Engineering Research Board, Department of Science & Technology.
The former VC said that the present curriculum of Physics in higher education is outdated and unnecessarily overloaded.
He asked all concerned to find time to engage in the process of modernizing the present curriculum of Physics inorder to make it lighter, more penetrative and robust.
Amuba further said that the modernization process does not necessarily mean the revision of curriculum and keeps on adding more.
Saying that he had been a member of PANE for a long time, he remarked that the Academy (PANE) provides a forum for the physicists in the North East Region, particularly the youngsters to come together for having fruitful discussions besides developing friendships and association among themselves.
Regional Institute of Science and Technology (RIST) Director, Professor A Surjalal Sharma who attended as the guest of honour stressed on the importance of looking/working beyond the ordinary context of physics to address the bizarre phenomena that are taking place in the world like climate change.
The Director who is also a Professor of the University of Maryland said that the students of Physics and physicists should try to find out the links between the said subject and the phenomenon in the society.
He added that those who study and do research in physics have to understand the underlying things in the subject rather than just considering its fundamental things.
Delivering the presidential speech, Head of the Physics Department, MU, Professor H Basantakumar observed that the 13th Biennial National Conference of PANE will provide an opportunity to interact with the well experienced senior scientists and youngsters.
He went on to inform that many senior scientists will give talks on various topics besides presenting papers by many young scientists during the 3 – day biennial conference.
Basantakumar also maintained that the conference will be held both in the online and offline mode.
The inaugural function was also attended by PANE President Professor N Nimai, general secretary Professor Kaushal Kalita and Dean of the School of Mathematical and Physical Sciences, MU Professor K Yugindro among others as the guests of honour.
A book titled “Conceptual Developments in Physics” was also released during the function.