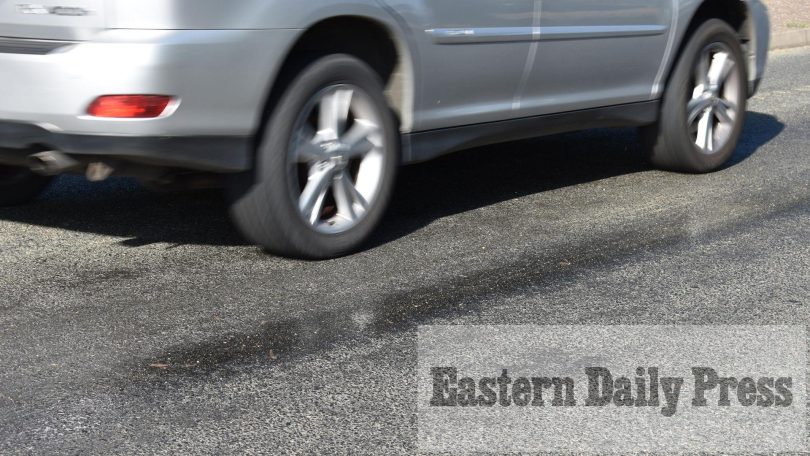 Treatment to prevent Norfolk’s roads from ‘melting’ during the recent heatwave cost more than £40,000.

And highways bosses at Norfolk County Council warned there could be an even higher bill, if checks find roads have been permanently damaged because of the heat.

July and August have both seen heatwaves and record temperatures in the county.

With surface temperatures reaching as high as 56.2C, the county’s roads suffered as people sweltered.

The council’s gritters – usually only called upon to treat roads in winter – were sent out to ‘dust’ roads with sand to prevent damage.

Townhouse Road in Costessey was among those treated by gritters
– Credit: Ella Wilkinson

Roads do not actually melt, but high temperatures can soften the bitumen on roads, making them less stable.

Applying sand to those roads soaks up the softened bitumen, and helps restore the stability.

And new figures released by Norfolk County Council have revealed roads were treated more than a thousand times as the sun beat down in July and August.

The council said it received 22 reports from the public and the total cost of those treatments and repairs, which saw some roads treated twice a day, was just over £43,000.

At a recent council meeting, Julie Brociek-Coulton, Labour county councillor for Sewell ward in Norwich, criticised the time it had taken the council to respond to issues raised.

But the county council defended its response. It said roads were divided into different priorities, with the majority rated as priority B and C.

A spokesman said the average length of time from report to repair for a road deemed priority B was 1.33 days, and for a road regarded as priority C, it was 4.45 days.

The council could yet have to spend even more to fix roads where heat has caused longer-lasting damage.

A council spokesman said: “As for permanent damage, it’s very difficult to say without testing and monitoring.

“It’s likely that there will be sites that will require remedial works following the very high temperatures and these will be actioned as necessary.”