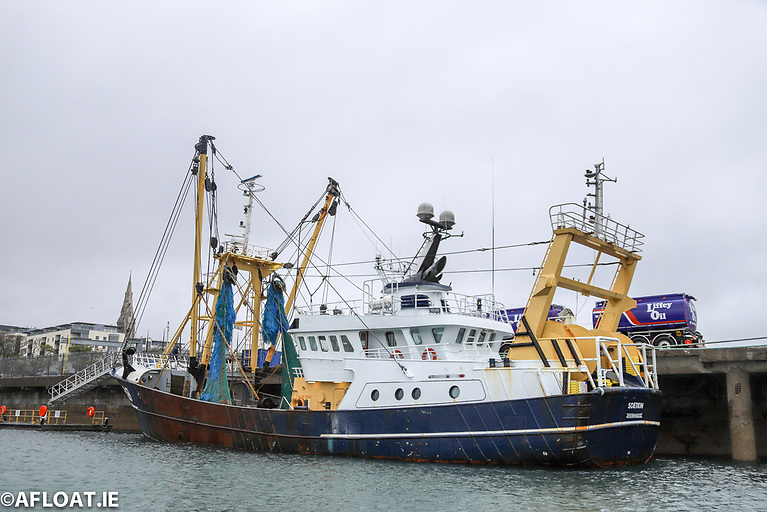 Landings of foreign vessels into Irish fishing harbours have risen by 48 per cent over the past decade, while there has been a “big drop” in the amount of fish landed by Irish vessels.

Ó’Donnell and Byrne described the hour-long discussion with the Tánaiste – arranged through Fine Gael – in Government Buildings as “positive”.

O’Donnell said it was “the first step in a process aimed at ongoing engagement on the developmental needs of the seafood sector.”

The Department of the Marine was represented by Dr Cecil Beamish.

Byrne said the meeting was focused on “building a whole of government approach to arrest the decline of the sector”.

He said it also “focused on the need to support industry at all levels in a process of innovation-led development’’.

Landings of Irish fishing vessels in both domestic and foreign ports fell by a third since 2012, O’Donnell told the Tánaiste.

“Over the same period, landings of foreign vessels at Irish ports rose by 48%. There is a major disparity here, leading to a big drop in the amount of fish landed by Irish fleets,”he said.

“ This hits hard at fish producers and fish processors, but also at other industries relying on Irish fish. We discussed this in the context of the adverse and disproportionate impacts of Brexit quota transfers,”O’Donnell said.

“We emphasised that there is a need to achieve a rebalancing so that Ireland has a fairer share of quotas in the EU,”he said.

“We are moving towards a situation where Irish processors, retailers and restaurants are forced to buy more fish from foreign vessels because the Irish fleet can no longer meet demand,”he said.

“We outlined how this is a threat to our food security and employment in coastal communities,” he added.

The IFPO and the IFPEA say they also “took time to press for the need to immediately draw down the existing EU fuel aid subsidies which other member states are already claiming”.

“There is no cost to the State in passing on this aid as it is already on offer. It makes no sense to force our fleet to compete at a disadvantage with other EU fleets that are getting as much as 30c/litre in fuel aid. Otherwise, putting to sea will simply be unaffordable for increasing numbers of Irish vessels,” they said.

O Donnell says he outlined to the Tánaiste the need to back demands for the development of plans for the fishing industry’s future.

He said the Government “needs to press the EU to achieve a more equitable share of quotas for Ireland”.

“At present, decommissioning around a third of the whitefish fleet is being implemented to match the fleet to reduced quotas post Brexit. This is a bleak prospect for the sector,” O’Donnell said.

“We have stressed the need for a developmental approach to modernise and renew the fleet. This needs to be supported by innovative ways of securing more quotas,” he said.

O’Donnell said they also “outlined the need for Government to take account of fishers in the planned development of offshore wind”.

The IFPO and the IFPEA said the delegation was satisfied with the exchange of perspectives.

Byrne thanked the Tánaiste for ‘’taking time in his busy itinerary to meet with industry representatives in a frank meeting and for sharing his insights”.

“The Tánaiste clearly confirmed his commitment and that of the whole of government to working on sustaining this important industry to coastal communities,” Byrne said.

O’Donnell said the seafood industry must “continue to build a consensus and work together to represent this sector, and this is a step in this process”.

The IFPO and IFPEA representatives credited the support of Boyle and Lovett and their Fine Gael branches.

They also paid tribute to Colm Markey, Fine Gael MEP for the Midlands-North-West constituency for “his drive and commitment in raising awareness of fishery matters at national and EU level’’.