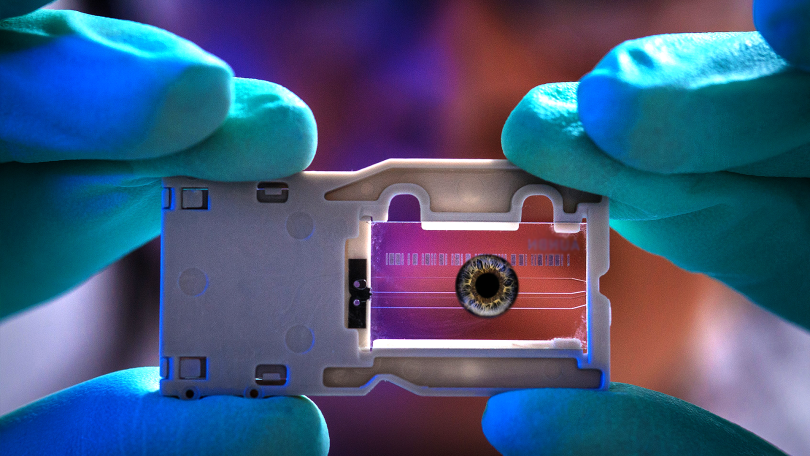 Picture shown here for representation purpose only. The retina cannot be depicted in a picture as above.

Retinal diseases are one of the leading causes of visual impairment and blindness worldwide. The retina, which lies at the back of our eye, is a light-sensitive layer that plays a vital role in how we see. It captures light and converts it into electrical signals that our brain interprets as an image. The human retina has many layers with complex features, each serving a specific function. For instance, photoreceptor cells in the retina are crucial for night and colour vision, while epithelial cells provide the nutrients and growth factors (molecules capable of stimulating cell growth) essential for vision.

Researchers from the Institute of Chemical Technology, Mumbai (ICT), in collaboration with the Indian Institute of Technology Bombay (IIT Bombay), have developed ‘retina-on-a-chip’, a model designed to mimic the structure and function of the human retina. The study, published in Biotechnology Journal, was funded by the Department of Biotechnology and Department of Science and Technology, Government of India, and the John Editha Kapoor Fellowship Fund, USA.

A microfluidic device is a miniature device designed to contain and manipulate small volumes of fluid (in microliters) in channels with a width one hundredth the thickness of a human hair. The microfluidic device designed in the current study is divided into chambers or compartments, allowing for the segregation and manipulation of different substances within the device. A compartmentalised microfluidic device provides a controlled environment to study various biological and chemical phenomena. The newly developed device allows growing the different retinal cells together and simulating the activities, mechanics, and physiological responses of a human retina.

Prior research to test therapies for retinal diseases has involved experimenting with animals. In addition to having ethical constraints in using animals as models, the results were inaccurate since the animal retina is smaller than the human retina. The newly developed retina-on-a-chip model provides an effective alternative to the existing models for studying retinal diseases and allows scientists to test the response of the retina to various drugs more efficiently.

The researchers fabricated the microfluidic chip using two interconnected polydimethylsiloxane layers, a class of polymer layers commonly used for modelling microfluidic devices. They evaluated the device’s efficacy in culturing different types of retinal cells together (co-culturing) and computationally validated it for its fluid parameters, such as pressure drop and flow rate.

The researchers identified retinal cells called precursor cells, which can develop into various cell types. The multi chambers within the device allow the growth factors released by epithelial cells to reach the precursor cells for them to develop and mature into photoreceptor cells.

The novel microfluidic device can potentially improve drug developments targeting retinal disorders that can occur due to ageing and other lifestyle diseases. This device can be used to understand the co-culture-based cell-to-cell interactions in diseased and normal retinal models. The model can also be extrapolated to simulate different retinal diseases. Additionally, the device has potential application in preclinical trials for evaluating new retinal drugs.

Microfluidic technology has been proven to yield promising results in drug developments with the help of artificial organs that display the functionality performed by a real organ. The researchers envisage that this technology is expected to gain wide attention for accelerating the development of retinal therapeutics without the possible constraints around the use of animal models.

“It took us 7 years to develop this model. We started working on this concept back in 2015 when the knowledge about microfluidics was at a very nascent stage. It was a challenging task to convince funding agencies and many others to specifically culture retinal cells,”  the authors tweeted on their official Twitter handle of Nanomedicine Research Group at ICT Mumbai.