While this year’s summer may have been the worst, it was the best in a decade for electronics company Vijay Sales, with many rushing to buy and upgrade air coolers, air conditioners, and refrigerators to beat record temperatures.

“This time, we had an early summer. Sales started a month earlier when, usually, it starts in mid-April. We had a very severe summer due to which we had really good sales. I think we have not seen such summer sales in the past decade,” Nilesh Gupta, director of Vijay Sales, said in an interview with CNBC-TV18.

But what has really helped the company — despite inflation — was the comfort of payment in instalments, with zero down payment option among others.

“Our prices went up because all commodity prices have gone with transportation costs… So, we were sceptical about how consumers would respond. But I think because of the finance schemes, like zero down payment and long tenures, short tenures, it seems that in consumer durables, consumers have become immune to price rise,” said Gupta.

According to a report by IndianRetailer, an analyst of the retail sector, sales of refrigerators went up by more than 100 percent in May compared to last year. Sales of room coolers jumped 2.5X, while AC sales witnessed a 3X growth.

It’s a summer party, and not just for consumer durables

Despite price hikes across sectors, the 2022 summer has been the best in years for most retailers in terms of sales. According to the Retailers Association of India (RAI), growth is visible across categories from white goods like computers, laptops and mobile phones, to garments.

Apart from the heatwave, the other factors driving the sales growth were the post-COVID rush for shopping and the resumption of festivities and celebrations. While retail sales grew by 12 percent in March over pre-COVID levels, they were up by 23 and 24 percent in April and May, respectively, over the pre-pandemic numbers.

“Of course, food and eating out is right on top. Now garment is up by about 24 percent, and the jewellery sector is doing very well. This is up because of the marriage season and that’s really helpful for the retail sector. Also, people have started going back to the offices and are refreshing their wardrobes. Leisurewear is up because people are travelling,” Kumar Rajagopalan, CEO of RAI, told CNBC-TV18.

Category-wise sales growth in May 2022 vs May 2019 (Source: Retailers Association of India)

There has been an 8-9 percent price hike across the board. According to Gupta, as prices stabilise and come down, the market will see further growth.

While the beauty and wellness segment has seen growth beyond the pre-pandemic levels in terms of sales, footwear, which was also not doing so well, has seen a growth of 30 percent in May.

“White goods are still being bought because, for many, they have become an essential product,”  Rajagopalan said. 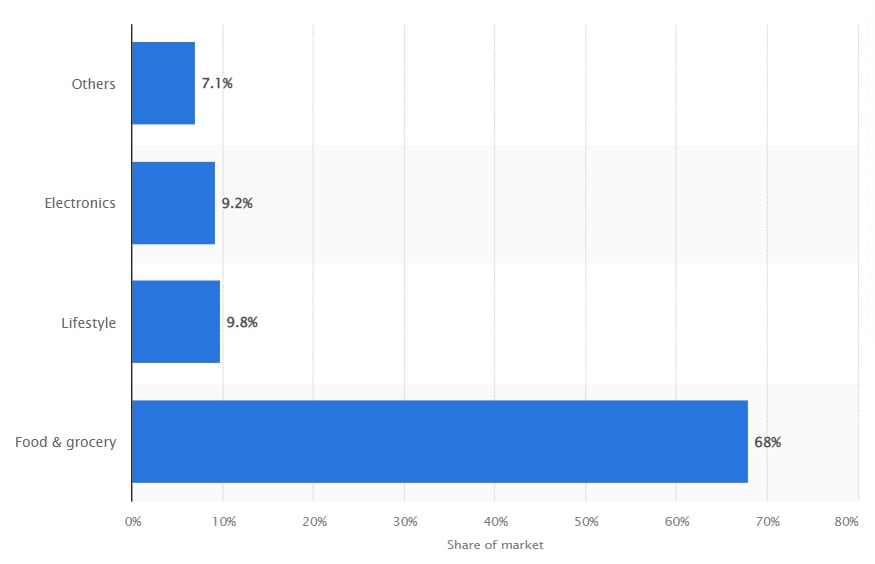 India’s fuel sales also saw a growth in May with a surge in summer travel amid breaks at educational institutions. As per preliminary industry data released earlier this month, petrol sales by state-owned fuel retailers, that account for about 90 percent of the market, were 55.7 percent higher than last year. Diesel sales saw a jump of 39.4 percent year on year but were still below the pre-COVID level.

Besides, the early onset of summer also increased the demand for beer, beverages and ice cream.

Vinod Giri, director-general of Indian Alcoholic Beverage Companies, told PTI that the demand for beer went up by 30 percent in March as the month — hottest in the last 122 years — recorded several days of the heatwave. Sales of beverages also increased more than 35 percent in March 2022 compared to those of last year, according to intelligence platform Bizom.

Industry estimates show ice-cream sales increased by around 45 percent during the last three months compared to the same period in 2019. “Most dairy companies had strong ice-cream sales in the first half of FY23,” ICICI Securities said in a report recently. This came at a time when the overall FMCG category has seen a slowdown due to subdued demand.

Going ahead, the retail sector would be in a safe place if it sees a good Diwali, added Rajagopalan.

However, auto retail sales are still below the pre-COVID levels

“May 2022 when compared to May 2019 reveals that auto retail is still not on a growth trajectory as overall retails were down by 10 percent,” said Vinkesh Gulati, president, Federation of Automobile Dealers Associations of India (FADA).

According to the Reserve Bank of India’s Consumer Confidence Survey released earlier this month, households expect their spending to increase in the next year with expenses on essentials going up while they plan to cut down on non-essential expenditures.