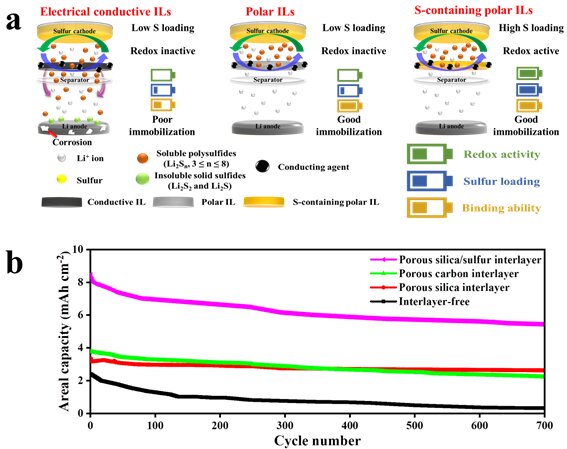 Professor Jong-Sung Yu’s research group in the Department of Energy Science and Engineering at DGIST developed a technology for a porous silica interlayer by loading sulfur, an active material, in silica. This new approach is expected to be pivotal to the R&D and commercialization of next-generation lithium-sulfur batteries, in which energy density and stability are essential.

With the recent increase in demand for large-capacity energy-storage devices, research on high-energy, low-cost, next-generation secondary batteries that can replace lithium-ion batteries has been actively conducted. Lithium-sulfur batteries, which use sulfur as a cathode material, have an energy density several times higher than that of conventional lithium-ion batteries, which use expensive rare-earth elements as a cathode material. Therefore, it is expected that the sulfur-based battery will be more suitable for high-energy devices such as electric vehicles and drones. In addition, research on lithium-sulfur batteries is widespread because sulfur is inexpensive, abundant, and non-toxic.

On the other hand, sulfur, an active element that produces electrical energy, has low conductivity, and polysulfide generated during charging and discharging of the battery diffuses toward the negative electrode of the battery, resulting in the loss of sulfur through its reaction with lithium. Accordingly, the capacity and lifespan of the battery significantly deteriorate. This issue has been ameliorated by inserting a new layer between the sulfur electrode and separator (middle) that can absorb polysulfide and block diffusion.

Conductive carbon, which is currently used as an interlayer technology to improve the capacity and lifespan of lithium-sulfur batteries, imparts conductivity to the sulfur electrode. However, the diffusion of sulfur cannot be prevented because its affinity with the polar lithium polysulfide is low. On the other hand, if a polar oxide is used as an intermediate layer material, the loss of sulfur is suppressed owing to its strong interaction with lithium polysulfide. However, the utilization of sulfur is lower owing to its low conductivity. In addition, the various interlayer materials studied previously are not ideal because they cannot achieve the energy density and cycle life required for commercialization owing to their thickness and low redox activity.

To address these disadvantages, the research team first implemented a new redox-active porous silica/sulfur interlayer by adding sulfur in the silica after synthesizing the plate-shaped porous silica. They predicted that the capacity and lifetime efficiency of the lithium-sulfur batteries would be maximized owing to the sulfur-induced increase in the capacity per cell area, because additional sulfur was loaded in the intermediate layer, which could also act as an effective lithium polysulfide adsorption site.

To investigate this theory, the silica/sulfur interlayer was applied to a lithium-sulfur battery, which was then charged and discharged 700 times. As a result, the porous silica/sulfur interlayer achieved a much higher long-term stability than the conventional porous carbon/sulfur interlayer after 700 charge/discharge cycles. In particular, the battery exhibited high capacity and durable, long-lasting properties, even at a high sulfur content of 10 mg/cm2 and a low electrolyte:sulfur (E/S) concentration of 4. Therefore, it is near-ready for practical application.

Professor Jong-Sung Yu stated, “Our study is the first to find that sulfur can be loaded into the pores of a porous silica material to serve as an intermediate layer material for lithium-sulfur batteries, improving their capacity and lifespan.” He added, “This result is a new milestone in the development of next-generation high-energy, long-life lithium-sulfur batteries.”

This study was conducted in collaboration with Dr. Amine Khalil’s team at Argonne National Laboratory (ANL). Dr. Byung-Jun Lee, who received his Ph.D. under the guidance of Professor Jong-Sung Yu of the Department of Energy and Science and Engineering at DGIST, was the first author. This study was published online on August 8th in Nature Communications.

Next generation lithium-sulfur battery solves the loss of sulfur problem

Provided by
DGIST (Daegu Gyeongbuk Institute of Science and Technology)

This document is subject to copyright. Apart from any fair dealing for the purpose of private study or research, no
part may be reproduced without the written permission. The content is provided for information purposes only.