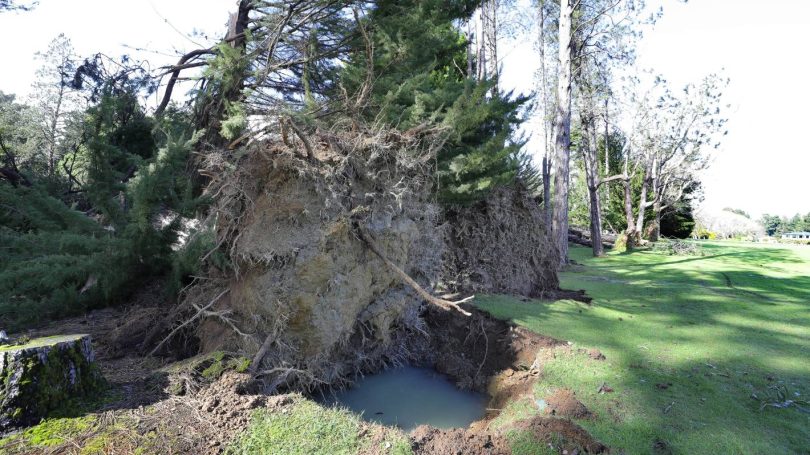 It will take South Port days to assess the damage from about 30 shipping containers falling during high winds on Sunday.

MetService meteorologist John Law said there were gusts of 115kph at Invercargill Airport and 142kph at Stewart Island on Sunday.

On Monday, a South Port spokesperson said about 30 containers fell, mostly around the edges of the stack.

No containers fell into the water and it would take a couple of days to assess the extent of the damage, the spokesperson said.

“Containers were stacked as per standard operating procedures,” the spokesperson said.

South Port did not believe there would be any delays for ships, though that was to be confirmed once the damage was assessed. However, the incident had slowed down trucks getting in and out of the port, the spokesperson said.

There were currently 726 empty containers at the port, the spokesperson said.

The last incident when highs winds had toppled containers was in May 2019, and some went into the water, the spokesperson said.

On Monday, Law said with winds coming from the south, there could be sleety conditions around the Southland coast and snow inland into Tuesday morning.

Snow has been falling in the area, including Bluff and Invercargill.

Invercargill was forecast for an overnight minimum of 0ºC on Monday night, and Gore was looking at -2°C, Law said.

Because of Sunday’s weather, 11 flights into and out of Invercargill were cancelled.

On Monday morning, a fire crew from Winton were called to the Winton-Wreys Bush Highway where power lines had fallen in the road.

A FENZ spokesperson said an off duty PowerNet employee was already on the scene when the crew arrived and had made the scene safe while waiting for PowerNet staff to arrive.

Fire crews checked that a house on Henderson St, Invercargill, was safe after it was reported to be flooded at around 5pm Sunday, a FENZ spokesperson said.

Council contractors were called about 5.20pm to sort out a large gumtree on Tramway Rd, Rockdale, that was leaning “precariously close” to power lines. The tree was too big for fire crews to handle and was left to the council, the FENZ spokesperson said.

About 6pm, fire crews were called in to help council staff secure roofing on a property near the Bayview Hotel on Gore Rd, Bluff. A fire crew from Bluff secured the roofing that was still attached and removed what had come off completely, the spokesperson said.

Swells of seven to eight metres hit the Southland and Otago coasts on Sunday. There were power outages at Colac Bay, Riverton, Otatara and Bluff, as well as Clifton, Kew, Kingswell and Dipton, information from PowerNet shows.

PowerNet chief executive Jason Franklin said on Sunday that some of the outages were caused by trees falling through power lines, which had particularly impacted people in Otatara.

An Otatara resident said power was out at their house from about 7am to 7pm on Sunday and the road she lived on was shut for about five hours because of downed power lines.

A Gore District Council spokesperson said it was “comparatively lucky” with the weekend’s high winds; a poplar tree came down at a cemetery on Sunday night, and a pine tree fell into a stream bed.