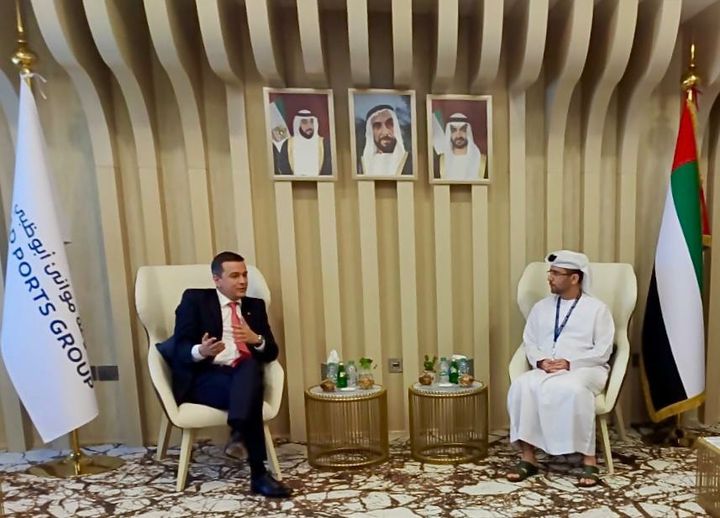 “During the meeting which we had today in Abu Dhabi, the representatives of this group said that they want to develop projects in the area of piers 3 and 4 in the port,” transport minister Sorin Grindeanu said in a social media post.

“We have decided to set up a joint working group to discuss the conclusion of a memorandum of understanding between the Port of Constanta and the AD Ports Group. We have invited AD Ports Group representatives to visit the port in order to establish terms of the collaboration, as the company is also interested in investing in the artificial island within the port.”

The two parties also discussed a possible partnership for the development of the Intermodal Cargo Logistics Centre at Timisoara Traian Vuia International Airport, which can thus become a strong regional commercial hub, connected to the railway and road transport networks.

Requiring an investment of some 300 million euro ($317 million), the logistics hub could be developed on an area of ​​65 ha, providing storage and transport facilities, including for intercontinental destinations, Grindeanu said.

He also announced that Romania has signed a memorandum of understanding with Ports, Customs and Free Zone Corporation (PCFC), an organization under the Dubai government, aimed at strengthening commercial relations. One of companies within the organization, DP World, has an ongoing partnership with the Port of Constanta., where it operates the South Terminal under a concession contract valid until 2049.

Abu Dhabi Ports’ portfolio comprises ports and terminals in the UAE and Guinea, and more than 550 square km of industrial zones within Khalifa Industrial Zone Abu Dhabi (KIZAD) and ZonesCorp, the largest integrated trade, logistics, and industrial business grouping in the Middle East. Since its establishment in 2006, Abu Dhabi Ports has played a pivotal role in the growth of the emirate, contributing 13.6% to Abu Dhabi’s non-oil GDP growth, according to its website.

The port of Constanta is located on the Western coast of the Black Sea and covers 3,926 ha of land and water. The Port has two breakwaters and 140 operational berths.