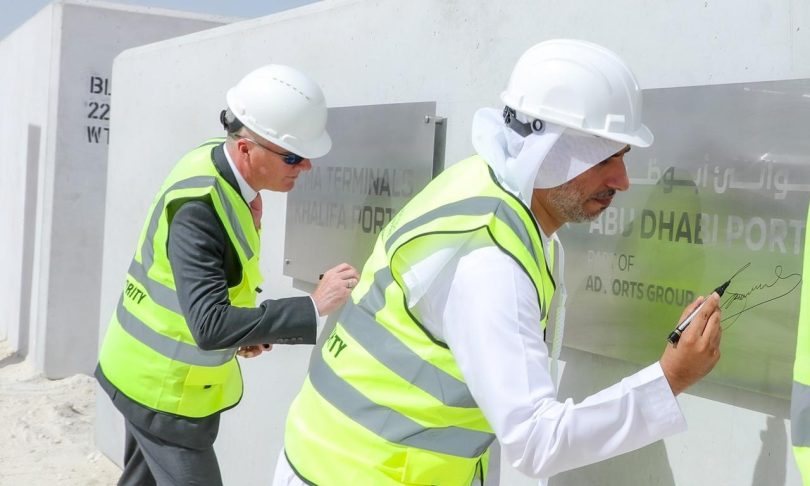 AD Ports Group and CMA Terminals installed the first 90-tonne block for the quay wall of the new terminal at Khalifa Port, marking a major development milestone with a special ceremony.

“Announced in September 2021, the development of the new terminal is on track with budgeted capital expenditure of AED 3.3 billion ($891 million). The terminal is expected to be operational in H12025 and will be managed by a joint venture owned by CMA Terminals (70 percent ownership), a subsidiary of global shipping and logistics giant CMA CGM, and AD Ports Group (30 percent ownership). AD Ports Group is developing a wide range of supporting marine infrastructure for the terminal, which will provide CMA CGM with a new regional hub,” says a release from AD Ports.

When the quay wall is complete, the signed block will be one of more than 6,000 within the 19m deep berth pocket and will be able to accommodate the world’s largest container vessels. Other facilities under development include a 3,500-metre offshore detached breakwater, a fully built-out rail platform, and 1,000,000 sqm of the terminal yard, the release added.

“Once ready, the new terminal will have an initial capacity of 1.8 million TEUs, will be fully integrated with Etihad Rail and will significantly enhance Khalifa Port’s connectivity and position as a key gateway for the region.”

Saif Al Mazrouei, Chief Executive Officer – Ports Cluster, AD Ports Group, says: “Today marks a key moment in the development of the new terminal in Khalifa Port, which will drive increased trade volumes and add new trade links with other high-profile ports, boosting the UAE’s economy. The scale of this 1,200-metre quay wall is indicative of the ambition of this project, which will create a major hub for CMA CGM, one of the leaders in shipping and logistics, supported by cutting-edge technology and services. With the arrival of CMA CGM, Khalifa Port is now providing hubs for three of the world’s top four shipping lines, consolidating our position as a leading facilitator of trade, logistics and industry.”

Michael Lund Hansen, CEO, CMA Terminals Khalifa Port, adds: “This is an important moment for our company and our partners, as work continues to develop this new terminal, which will expand our Group’s shipping and logistics network in the region. Khalifa Port is a leading global hub that supports trade flows in and out of Abu Dhabi. With our new terminal and the shipping line services it will attract, Khalifa Port will see increased connectivity to global markets and further development of multi-modal logistics facilities, and advanced port infrastructure.”

Khalifa Port was ranked in the top five of the global Container Port Performance Index (CPPI) by the World Bank and S&P Global Market Intelligence.