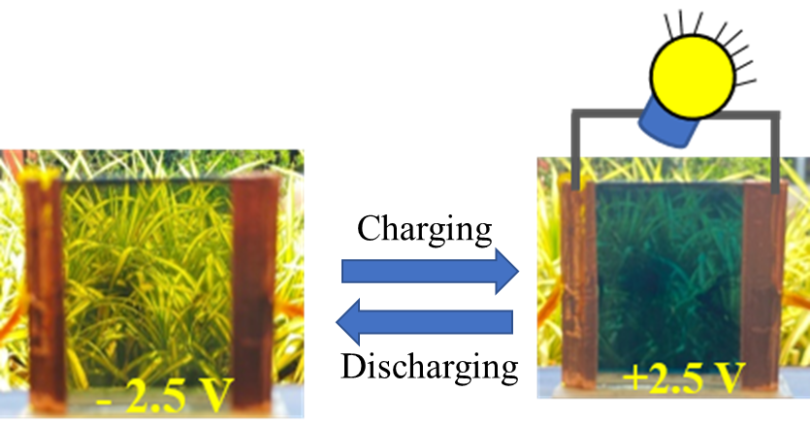 Indian scientists have developed a cost-effective polymeric electrochromic smart window which can store energy using hybrid transparent electrodes, as well as carry out transparency switching. It has the potential of replacing the costly traditional smart windows in modern structures.

Electrochromic smart windows have the potential of contributing to efficient power management of modern infrastructures. However, the high processing and material costs of such smart windows, especially the traditional ones made of Tin doped Indium oxide (ITO), have resulted in limited market uptake of the technology.

Bengaluru-based scientists from the Centre for Nano and Soft Matter Sciences (CeNS), and Jawaharlal Nehru Centre for Advanced and Scientific Research (JNCASR), autonomous institutes of the Department of Science & Technology (DST), Government of India, have found a cost-effective solution by utilizing a chemically synthesized conducting polymer, poly(o-methoxyaniline) (PMOANI), as an electrochromic layer over a low-cost transparent conducting electrode (ITO–60 nm/Al-mesh) to form a smart window.

The electrochromic device exhibited an excellent optical contrast of 57% between coloured and transparent states. It has a rapid switching ability and can perform several transparency switches as well as charging/discharging cycle (energy storage) without any degradation in performance of the device. When smart window is in a “Dark (Blue) state”, it is in a charge state, which means the energy storage in the dark (Blue) state of the device can be utilized to power a “Time display” or any small electronic gadget. Therefore, it demonstrates that the smart window device shows dual functionality by switching its colour from a Dark (Blue) state to a transparent (bleached) state while discharging to power a small electronic gadget.

The device was made cost-effective by utilizing the concept of the hybrid electrode, where the required ITO thickness is brought down to 60 nm from 280 nm without compromising its performance.

The scientists have set up a semi-automated production plant for the production of hybrid transparent conducting electrodes (TCE) to be used in smart window applications.

This work, carried out by Prof. G U Kulkarni, Dr. Ashutosh K Singh, and co-workers, was recently published in the journal ‘Journal of Materials Chemistry A’.

“We have fabricated an electrochromic and energy storage dual-functional device by using a low-cost conducting electrochromic polymer as the active layer on a cost-effective hybrid TCE, specifically ITO (60 nm)/Al mesh,” said  Dr. Ashutosh, the lead scientist working on this project.

The device can switch from ‘transparent’ to ‘dark blue’ and vice versa on the application of nominal voltage. In addition, it can power electronic gadgets with energy stored in ‘dark blue’ daily.

“We have optimized different characteristics of the conducting polymer including the thickness, concentration, and solvent processability of conducting polymer (poly(o-methoxyaniline)) to fabricate high-performance dual–functional electrochromic devices,” said Dr. Subash C K, another scientist who was part of the team.

Mr. Mukhesh K G, a Ph.D. scholar and co-author of the publication, explained that the hybrid TCE idea used here in this project aids in cutting down on the amount of ITO needed in the device fabrication without sacrificing the electrochromic performance.

“We are making a few more electrochromic smart window prototypes using our hybrid TCE to prove their capability with other materials. These transparent conducting electrodes can be made available to interested industries and R&D labs on a request basis to explore collaborative projects,” said Dr. Indrajit Mondal, a co-author in the research.

The low-cost hybrid transparent conducting electrodes have enormous potential to be used in advanced large-area smart window applications. The fabricated electrochromic energy storage device’s dual functionality and inexpensive processing cost could find use in modern infrastructures and the automotive industry.