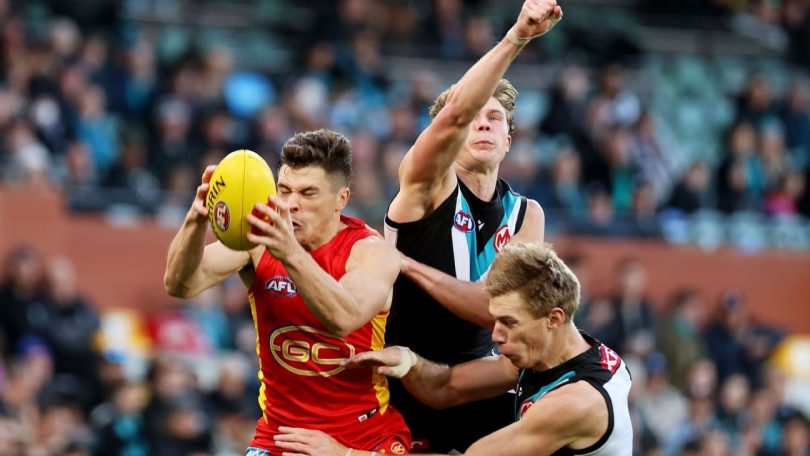 Port, after losing their initial five games of the season, are now just one win outside the top eight in 12th spot.

The Suns, seeking a maiden finals berth, are 11th with the same amount of wins – seven – as the Power.

Chol also was involved in two second-term flashpoints when he celebrated two goals only for those scores to be overturned on review when audio evidence showed both kicks brushed a goal-post.

Port’s Kane Farrell was also denied a goal in the second quarter when a long-range attempt when the ball, as shown by video replays, just failed to entirely clear the line created by the goal-post padding.

Port were up by 18 points at quarter-time and by five at halftime, stretching their lead to 11 early in the third term when Charlie Dixon slotted a brilliant left-foot snap from near a boundary for his 300th AFL goal.

But the Suns rapidly rattled on four of the next five goals – the last in the spree, a clever Rankine major on the run from a tight angle, gave the visitors a seven-point buffer.

That advantage disappeared when Port’s Connor Rozee scored two goals in two minutes – the Power hit the front again in the fourth lead change in a pulsating 15 minutes of action.

Port’s Jeremy Finlayson and Marshall converted late goals to increase their side’s advantage to 13 points at three quarter-time, 12.11 to 10.10.

The Power only added one more goal – another from Marshall – in a frantic final term as the Suns scored three majors.

The last goal from Gold Coast’s Nick Holman put them two points down with a tick over two minutes remaining but Port held on for a vital victory.