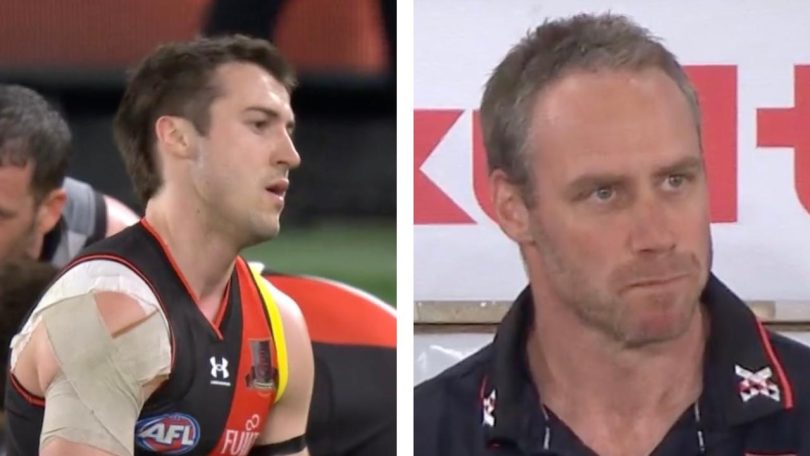 Barring a third-quarter fightback, Port Adelaide was barely troubled by the Bombers, kicking its highest score of the year.

It marks a welcome pressure release for Port Adelaide and sets the stage for a Showdown with Adelaide to close out its season.

There were no late changes for either side. Ben Hobbs (Essendon) and Jackson Mead (Port Adelaide) were the medical substitutes.

Port Adelaide got off to the perfect start, with Travis Boak finishing off a crisp bit of play in the first 15 seconds of the match.

Essendon responded via Nic Martin, who streamed into the forward 50 and finished cleanly.

Todd Marshall and Mitch Georgiades combined for the next two majors, then a brilliant mark from Charlie Dixon was followed by an assured set shot, giving the Power some breathing room on the scoreboard.’

Mid-season draftee Massimo D’Ambrosio helped bring his side back into the mix, kicking his first AFL goal and then his second just minutes later.

Essendon gave away a costly free kick during a scuffle with Jeremy Finlayson, which resulted in Sam Powell-Pepper kicking a goal just before the quarter-time siren.

Port Adelaide led by eight points at the first change.

Powell-Pepper’s late goal was only the beginning of the Power’s surge, with Ken Hinkley’s side running rampant over Essendon as the second term began to unfold.

The Power continued to pile on the goals, with Karl Amon making it a 52-point margin and eight unanswered goals.

“It seems like they’ve given up in a sense Essendon,” Jordan Lewis said on Fox Footy, pointing to the Bombers’ lack of communication and effort.

By half-time, the Bombers trailed by 51 points.

Todd Marshall kicked the first goal of the second half, but Essendon was then let off by a couple of misses from Port Adelaide in front of goal.

An Archie Perkins set shot finally broke Essendon’s goal drought, but Zak Butters restored a 60-point lead for his side with a goal shortly after.

Peter Wright and Nick Hind got back-to-back goals for the Bombers as they began to show a bit more fight through the middle of the ground, but Port Adelaide still managed to get looks at goal.

By three-quarter time, Essendon had won the quarter, reducing a 51-point margin to 49.

Unfortunately for Essendon fans, the final quarter was far from impressive, with Port Adelaide rapidly extending its lead.

Several goals for the visitors came with alarming ease as the margin continued to grow as much of the Bombers crowd began to head home.

Ben Rutten must be wondering why the message didn‘t get through to his players.

The Bombers were well beaten by Greater Western Sydney last week and, heading into Sunday, the focus was clear.

“We need to respond really quickly, in particularly in and around the contest,” Rutten told Fox Footy pre-game.

“Our ability to tackle and win our share of contested ball and pressure the opposition … we‘re really looking forward to seeing how we shape up against them tonight.”

With such a focus on the contest, it must‘ve been quite alarming for Rutten at the main break, with his side conceding 43 points from stoppage while scoring just seven on its own end.

“Around the contest it‘s terrible … they’d been the number one stoppage team in the last month of football but were smashed last week and were absolutely smashed around the football today, especially in the second quarter,” Jonathan Brown told Fox Footy at half-time.

“It started from the centre-bounce in the first quarter but then around the ground in the second quarter.

“They‘ve given up seven goals from stoppage, which is an unbelievable number for a game of football let alone a half.”

The midfield responded with a better showing in the third quarter, but limped to the finish line, doing nothing to mask questions the Bombers must address ahead of a searching off-season.

“Parish is there, Shiel is back, Merrett is there, they‘ve got dominance in the ruck because Draper has height over Finlayson … they need to change something,” Brown said.

“I‘d be saying if I was Ben Rutten, ’if you boys want to play in the midfield you need to earn it, so out’.”

Such was the scale of the loss, Brown in the immediate aftermath noted: “I don‘t know what to say.”

Aliir Aliir has been a tremendous intercept defender, but perhaps that description is selling him short.

Few players this season have been able to stop Peter Wright from having an impact on the scoreboard or up the ground, but Aliir proved an exception to the norm.

“I‘ve been really impressed. He’s not just a zone-off defender. Peter Wright is one of the best key-position forwards in the competition this season.

“He has not only shut him down, he‘s had an impact offensively as well and been able to get across and spoil not just Peter Wright but other opposition players as well and help out his teammates.

“I think he‘s had an outstanding game and I think it highlights his development as a key defender.”

Ken Hinkley has a lot of headaches after a disappointing season, but perhaps a good one is in the ruck.

Scott Lycett‘s injury early in the season certainly hurt the side in the short-term, but as the season has progressed there have been promising signs in that department.

Sam Hayes came in for a lengthy period and showed promise with the number one ruck mantle, then Brynn Teakle burst onto the scene as a mid-season draftee, showing plenty before going off injured on his AFL debut.

Jeremy Finlayson, however, could be the pick of the bunch and a shrewd bit of recruiting.

Many questioned the need for Finlayson when he came across via trade at the end of last year, but he has shown some incredibly impressive potential when handed the reigns in the ruck.

On Sunday, he demolished opponent Sam Draper and made the ruck case even more curious for Port Adelaide in 2023.

“We‘ve pumped up Draper a lot this season, we think he’s going to be a really good ruckman in the competition going forward,” Jonathan Brown told Fox Footy.

“He‘s had four disposals, his opponent Jeremy Finlayson has had 21, four clearances and two goals.

“It shows the difference in the day, it also shows the impact a player like Finlayson can have.”

Recap Essendon v Port Adelaide in our blog below!

If you can’t see the blog, tap here.