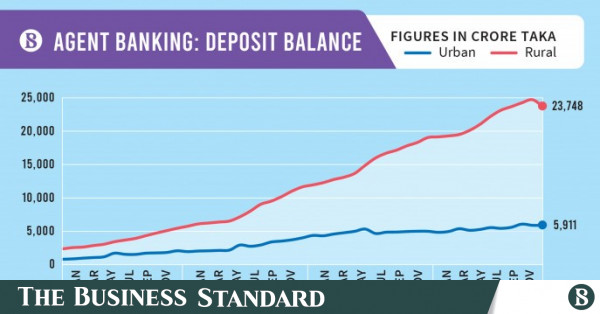 For the first time in four years, banks’ deposit mobilisation through their agent banking outlets in rural Bangladesh posted a negative growth in November 2022 – a development that, analysts say, is attributable to soaring inflation.

According to Bangladesh Bank’s data, deposits mobilised through agent banking outlets in rural areas stood at Tk23,748 crore at the end of November, down from Tk24,720 crore a month ago.

Since the lion’s share of agent banking deposits come from rural areas, the fall in deposits by rural customers led to a dip in overall deposits despite positive growth in urban areas.

Bankers have told The Business Standard that the decrease in deposits mobilised through banks’ agent banking outlets was in line with the falling trend of deposits in the regular banking channel.

Total deposits in the banking sector fell by 0.21% to Tk14,86,888 crore at the end of November from Tk14,90,043 crore a month ago, according to Bangladesh Bank data. The negative growth in deposits was principally caused by customers withdrawing time deposits, says the central bank.

“First, people’s costs of living have increased because of a rise in commodity prices. The impact of inflation has also hit rural people, as a result of which they are not able to save money as before.

“Secondly, negative news about the banking sector has caused a dent in people’s confidence in the banking sector. Rural people, in particular, are influenced by various rumours. Because of this, they are now more inclined to keep cash in their hands instead of parking them in banks.”

The seasoned banker has, however, expressed optimism that the decreasing trend of deposits will not last long.

“I feel the banking sector will soon overcome the ongoing confidence deficit and deposits through agent banking will start increasing again in the coming days.”

At the same time, the customer base of agent banking also increased to 1.73 crore.

Non-food inflation in rural Bangladesh jumped to 10.31% in November from 9.98% in the previous month.

According to the Bangladesh Bureau of Statistics, the non-food inflation fired up the overall inflation in rural areas to 8.94% in November from 8.92% in October.

In November, rural food inflation, however, decreased to 8.23% from 8.38% in the previous month.

The Bangladesh Bank introduced agent banking in Bangladesh in 2013 with an aim of providing a safe alternate delivery channel of banking services to the under-served population who generally live in geographically remote locations that are beyond the reach of the formal banking networks.

An analysis of available data shows that although deposits through agent banking outlets in urban areas went through ups and downs previously, deposits in rural areas had never decreased in the last four years before November last year.