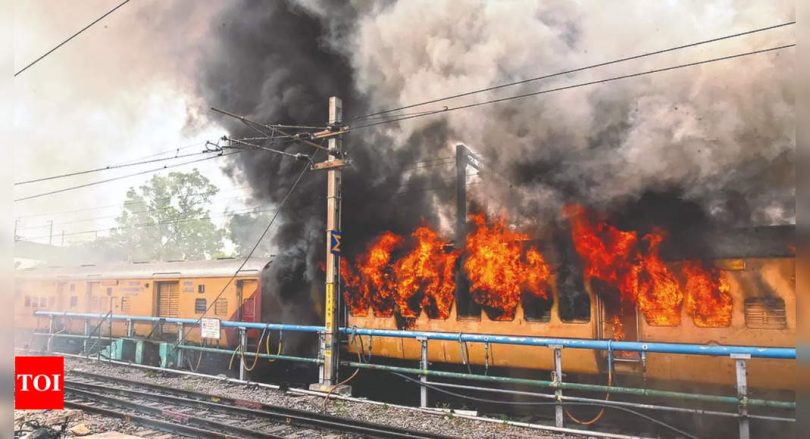 Violent protests had erupted after the Center had announced the Agnipath scheme.

HYDERABAD: A week after people protesting against the Agnipath scheme for recruitment to the armed forces turned violent at Secunderabad railway station, Sai Defence Academy owner and key accused Avula Subba Rao and three of his aides were formally arrested by railway police on Saturday.
Rao, who was earlier given a clean chit by the Andhra Pradesh police but was later brought to Hyderabad by Telangana police, was charged with instigating violence and planning and executing the attack on Secunderabad railway station from a lodge in Boduppal, on the city’s outskirts.
A retired Army medical assistant who runs a chain of defence coaching centres since 2014 in the two Telugu states, Subba Rao was watching the horror unfold at Secunderabad station on June 17 on television and monitored the situation while receiving updates on the phone from his henchmen on the ground, police claimed.
Subba Rao and three aides – Malla Reddy, Shiva Kumar and Beesi Reddy – have been charged under 29 IPC sections and bopped under the Railways Act, 1989.
“Subba Rao travelled to Hyderabad from Narasaraopet, Andhra Pradesh, a day before the violence was unleashed on Secunderabad station, and put up at a suburban lodge that he turned into his command post. While declaring support to the agitation, he directed his associates, Malla Reddy, Shiva and Beesi Reddy, to instigate Army aspirants to mob the railway station, while vowing to bankroll the stir,” the police claimed.
On June 14, after Centre announced the Agnipath scheme and scrapped the Common Entrance Exam (CEE), aspirants for Army jobs who had cleared medical and physical tests were angry as they had spent two years preparing for CEE.