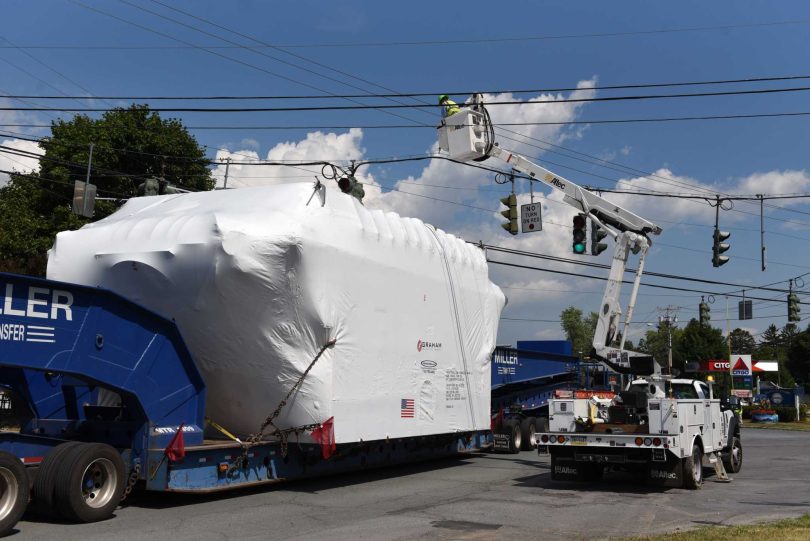 This story has been amended to include how the Port of Albany describes the equipment.

State Police warned motorists in Greene and Albany counties Thursday that a massive piece of equipment for a ship that is headed for the Port of Albany will be making its crawling journey on Routes 23, 9W and 144 — meaning serious traffic delays on those routes.

Police said the load — 497,500 pounds of it — moves at only up to 10 mph and takes up both lanes. “Drivers should plan an alternate route to avoid delays and congestion,” police said.

Officers are escorting the equipment, which will be driving from 9 a.m. to 3 p.m. starting on Route 23 East, then to Route 9W North Glenmont Road and to 144 North to the port.

Late Thursday morning the equipment was in Ravena. A team that drives ahead was trying to figure out how to raise traffic lights at an intersection for the tall load to move through.

The State Police’s Facebook alert on the equipment has drawn hundreds of comments, as people reported seeing it this week as it was driven from Batavia through Central New York and the Southern Tier.

Port of Albany CEO Richard Hendrick said the equipment is a condenser for an aircraft carrier that will be barged from the port to Newport News,Virginia. There are three more that will be coming to the port soon.

“A lot of what we do obviously comes by rail, but the size of this it can’t get under the clearances of the rail bridges,” Hendrick said.  “It has to come by road.”

Hendrick said massive equipment brought by road to the port only happens a couple of times a year. This particular cargo was supposed to arrive at the port Wednesday, but the company needed to find a second driver for the “pusher car” at rear of the trailer to relieve another driver.

“Followed this from Norwich, NY to South New Berlin, NY,” one commenter on the State Police post wrote. “Wish I had a warning like this post — I would have planned a different route instead of sitting behind them in mile-long traffic for 25 minutes to cover 4 miles.”