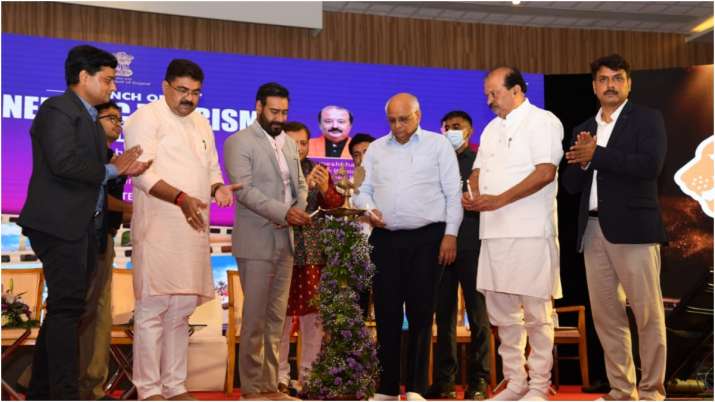 Gujarat Chief Minister Bhupendra Patel on Saturday launched the state’s first ‘Cinematic Tourism Policy-2022’ in order to promote and develop an ecosystem for film production industries and to stimulate the tourism economy.

The policy aims to attract investment, facilitate development of film infrastructure, and enhance entrepreneurial opportunity and employability of youth in the film production industry, stated the document released by CM Patel in the presence of film actor Ajay Devgn.

It seeks to simplify the administrative processes and develop an ecosystem for the growth of film-related infrastructure through public-private participation, the policy document added.

“The government will provide financial incentives to feature films, documentary films, brand affiliations, web and TV series and documentaries in all languages at 25 per cent of eligible expenses of production or a given maximum limit after they meet set criteria,” it said.

To further boost investment, the government will provide 100 per cent reimbursement of registration fee and stamp duty paid to the authorities and will also provide land on lease if required.

It said a state level empowered committee (SLEC) under the chairmanship of the chief minister will approve projects with investment value of more than Rs 500 crore and mega events, and will review policy and coordinate with different departments for better and efficient implementation.

There will also be a committee for content and quality and a state-level implementation committee under the additional chief secretary of the state Tourism Department to approve projects with investment between Rs 100-500 crore.

The process of booking, permission and clearance will be coordinated through the film facilitation cell of the Tourism Corporation of Gujarat Limited (TCGL).

This cell will also update the database on locations, images, videos, labour, artists, as per the policy document.

“The Commissionerate of Tourism will act as a nodal agency for the implementation of the policy, which will be applicable for feature films, documentary films, web series, TV serials, mega film events and final infrastructure projects,” an official said.

After launching the policy, CM Patel expressed confidence it will play an important role in the development of film infrastructure in Gujarat.

A new era of development politics that started under the leadership of Prime Minister Narendra Modi has turned Gujarat into a “development model of the country”, Patel said.

“Gujarat is a policy driven state and has become the first place of choice for investors, businessmen of the world.
This policy will also give an unparalleled boost to tourism development by bringing the service providers of the film making sector on one platform,” the CM asserted.

With the launch of the policy, four Memorandums of Understanding (MoUs) pledging a total investment of Rs 1,022 crore in various subjects, including film making, studio infrastructure and acting school, were signed in CM’s presence.

Actor Ajay Devgn also signed an MoU for film making and studio infrastructure and other facilities in the state, officials said.

Tourism Minister Purnesh Modi and MoS Tourism Arvind Raiyani were also present along with senior officials of the tourism department.