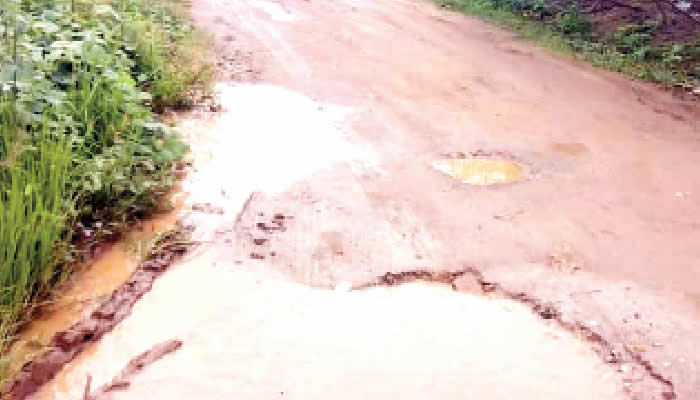 Erosion has caused more havoc on deplorable roads in the Akoko area of Ondo State with residents lamenting that bandits have turned the communities to their hideouts, PETER DADA writes

Residents of the Akoko area of Ondo State have decried the state of their roads as erosion has reportedly caused more damage to the roads during the ongoing rainy season.

It was also learned that the deplorable condition of both the federal and the state government-owned roads in the area had been responsible for the high increase in the activities of bandits, particularly, kidnappers and armed robbers. According to reports, the bandits’ modus operandi is to lay in ambush for their victims when vehicles slow down, which they must, when they get to the bad portion of the highways.

However, the presence of the men of the State Security Network Agency also known as Amotekun Corps, in the area, has to some extent, reduced the scourge.

Many of the residents have argued that the Akoko land, which occupies four out of the six local government areas in the Ondo North Senatorial District, had always suffered neglect in the area of good roads and other infrastructural facilities by the successive governments in the state. According to some of the residents, some communities in the area have become completely inaccessible as a result of non-motorable roads and consequently the agrarian residents, especially the farmers find it difficult to transport their produce to the cities for sale.

It has been argued in some quarters that Akoko indigenes in positions of power at both the state and the federal level have allegedly not been able to do anything to ameliorate the unfortunate development. In the same vein, the representatives of the area at the state and the national assembly, have not been able to lobby the executives to address this challenge. In 2011, many were initially elated that an indigene of Akoko land, Senator Ajayi Boroffice, was elected as a senator to represent Ondo North Senatorial District. They had high expectation that the area would begin to feel the presence of the Federal Government to address their perennial infrastructural challenge, particularly good road network.

Many have been criticizing the senator that with his 11 years at the senate, the ranking senator, who is currently one of the principal officers at the senate, could not influence the federal ministry and agency in charge of roads to fix the bad Akoko roads. However, the people have given kudos to the state government for the ongoing construction of Ikare township dualization and some road projects that have been carried out in some parts of the area. Also, a member of the House of Representatives, representing Akoko North-West/Akoko North-East Federal Constituency, Mr Olubummi Tunji-Ojo was commended for the role he played in alleviating the suffering of his constituents.

The federal lawmaker, who is the Chairman House Committee on Niger/Delta Affairs, was reported to have influenced the construction and rehabilitation of some terrible and long abandoned roads in the federal constituency.

It was gathered that erosion due to continuous rainfall has washed away all roads leading to the communities like Igashi and Eriti both in Akoko North-West Local Government Area of the state. Some other roads that are said to need the state government’s attention are Ajowa to Igashi to Eriti and Omuo-Oke and Oke-Agbe to Igashi Akoko.

An indigene and commercial driver, who identified himself as Olaniyi Alade described the roads as hell for motorists, saying the roads are in a very deplorable condition, which has affected the socio-economic growth of the area.

He said, “Farmers from Igashi, Eriti and Oke- Agbe rely on the road for their farming activities while members of the two communities usually find it very difficult to do business at the local government headquarters at Oke-Agbe.”

According to him, the NDDC had some years back embarked on Ajowa-Igashi-Eriti road, but after doing a little work the project was allegedly. Alade lamented that teachers and health workers have always been scared away from some parts of Akoko land because of bad roads.

Commenting, the monarch of Eriti Akoko, Oba Amos Ogunleye appealed to the government to consider the importance of the affected roads in Ajowa, Igashi, and Eriti as a gateway to Ondo State, and repair them, without further delay.

“Our roads are not in good condition, and we are appealing to the government to assist us in fixing the roads. Our communities used to be food baskets but transportation is an issue as a result of the bad roads. We deserve government attention in the area of infrastructure,” he said.

Similarly, the deplorable Federal Government roads in the Akoko area are also problematic for motorists, particularly travellers passing through the area to the neighbouring Ekiti, Kogi and Edo states as well as those heading towards the northern part of the country.

The affected federal roads are Ikare Akoko – Irun Akoko – Ado Ekiti expressway, which is becoming impassable by the day as erosion has worsened some parts of the road, like the Ikare Akoko- Ajowa Akoko road to Kogi State. The road was said to have recorded many accidents.  On many occasions, big trucks would get stuck on the bad road and block it whenever it rained and hinder the passage of other road users. The previous administration was said to have begun the repair of the road but the work later stopped.

However, the state Commissioner for Infrastructure, Lands and Housing Raimi Aminu said the current administration in the state understands the importance of roads to the people and it had been making efforts to fix and construct roads across the 18 local government areas of the state, without neglecting any area.

He said, “If you are talking about Akoko, it has four local governments and there is none of the local governments we’ve not touched and we have it in mind to do more when there is money. For instance, the present government did the construction of Oke Alabojuto in Ikare – Akoko which happens to be the commercial hub of Akoko. Apart from that, we are constructing a 4.5km road dualization in Ikare Akoko which has attained 90 percent completion. Apart from that, Jubilee/Ugbe Akoko road was impassable since the administration of former Governor Olusegun Agagu but we’ve done it. In addition, the backlog of debt on the Iboropa/Ugbe road has been paid for by this administration.

“We moved to Akoko North-West LGA, Ikaram to Akunu road has been completed. The 7km Ikaram Akoko to Oke-Agbe is over 70 per cent completed. We are also working on Arigidi/Oke-Agbe road, the contract has been awarded, and after the rainy season, work will recommence. In Akoko South West, we worked in Supare, Oke-Afa road has been completed, and we are moving to Oka. We are also working on four roads in Akungba-Akoko.’