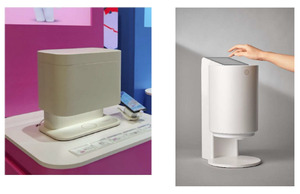 Algocare CEO Joung Ji-won said she realized the situation when visitors to Algocare’s booth at CES 2023 told her that they saw a similar product at Lotte Healthcare’s booth.

According to her allegations, Lotte Healthcare obtained information about Algocare’s ‘Nutrition Engine’, a cartridge-type nutrient dispenser, and business strategy information, in a 2021 meeting with Algocare.

Cazzle is the name of the nutrient dispenser product that Lotte Healthcare unveiled at CES 2023, the world’s largest consumer tech show held in Las Vegas, the U.S., earlier this year.

According to Joung, Algocare received offers from Lotte Ventures and Lotte Healthcare for investment and business cooperation from September to October 2021, and met with Lotte Healthcare Executive General Manager Woo Woong-jo. Woo has an extensive healthcare biz building career previously working for Korean conglomerates such as Samsung Electronics and SK Telecom, according to news reports.

During the meeting with Woo, Algocare shared information on its products and business strategies under development, Joung said.

“However, after the discussion on Algocare investment broke down by the end of October (in 2021), Lotte Healthcare introduced a new nutritional supplement dispenser product similar to Algocare (this year),” Joung said.

She alleged that Lotte Healthcare stole ideas such as the cartridge structure and principle, which are the core technology, and the dispenser concept.

“Lotte Healthcare, along with Lotte Ventures, approached the company and said that they had no intention of developing a product, but wanted to introduce Algocare products in the Lotte Healthcare platform,” Joung said. “After the investment discussion broke down, both companies suddenly changed their words and demanded that they would give Algocare a license fee to make its own product.”

Joung also explained that shortly after Algocare and Lotte Healthcare stopped discussing, an employee of Lotte Healthcare used a photo of Algocare provided by Algocare to check whether the same business model would not break any regulations on “e-People,” a government-operated website that addresses people’s complaints against government agencies.

“We plan to take all legal action, both civil and criminal, after judging Lotte Healthcare’s action as a violation of the Fair Trade Act and the Unfair Competition Prevention Act,” Joung told Korea Biomedical Review. “In his 2023 New Year’s address, Lotte Group Chairman Shin Dong-bin asked Lotte Healthcare and Lotte Bio to innovate and talked about coexistence with small and medium-sized enterprises.”

In a press release to reporters, Lotte Healthcare said that providing personalized health functional food is a business that had an idea from the time the healthcare industry was selected as a new growth engine at the Lotte Group level.

“After the investment discussion with Algocare broke down, we decided to manufacture our own dispenser that fits the business direction, and the dispenser and cartridge were manufactured by referring to the automatic tablet sorting and packaging system machine used in commercial pharmacies,” Lotte Healthcare said.

The company stressed that Algocare’s model was not something new.

In around 2021 when Algocare participated in CES, a personalized, water purifier-like drug dispenser was a common concept in the global market, Lotte Healthcare said.

The company also argued that its Cazzle dispenser and Algocare’s Nutrition Engine were two different products.

“While Algocare dispenses the nutrition pills by inserting memory chips containing product information into cartridges, Lotte Healthcare uses RFID stickers, which are commonly used in the distribution industry, to recognize nutritional information in cartridges,” Lotte Healthcare said. “RFID stickers are similar in concept to barcode stickers in the distribution industry, and contain general information such as product ingredients and expiration date.”

It is different from the core technology of Algocare, which stores replacement time alarms, delivers the drug automatically, and tracks nutritional supplements in a memory chip, it added.

After Algocare raised allegations against Lotte Healthcare, the Ministry of SMEs and Startups (MSS) dispatched a public official dedicated to the administrative investigation of technology infringement to Algocare to identify the damage situation and discuss countermeasures.

“The Ministry of SMEs and Startups plans to make efforts to quickly achieve mediation when Algocare applies for an administrative investigation of technology infringement and technology dispute, and plans to support the cost of litigation if mediation is not successful,” the ministry said. “In addition, to respond to idea theft allegations by the victim company, we plan to secure evidence through digital forensics, and provide legal support related to the protection of SME technology through our legal team.”

The SMEs and Startups Ministry also stressed that, at the request of the company, the ministry may provide further legal advice for reporting to relevant ministries such as the Fair Trade Commission and the Korean Intellectual Property Office.

“The new government is pursuing putting an end to technology theft targeting small- and medium-sized businesses as a national task,” the ministry said. “To enhance the effectiveness of technology theft damage relief, the ministry will strengthen the punitive damages system and overhaul related laws and systems.”