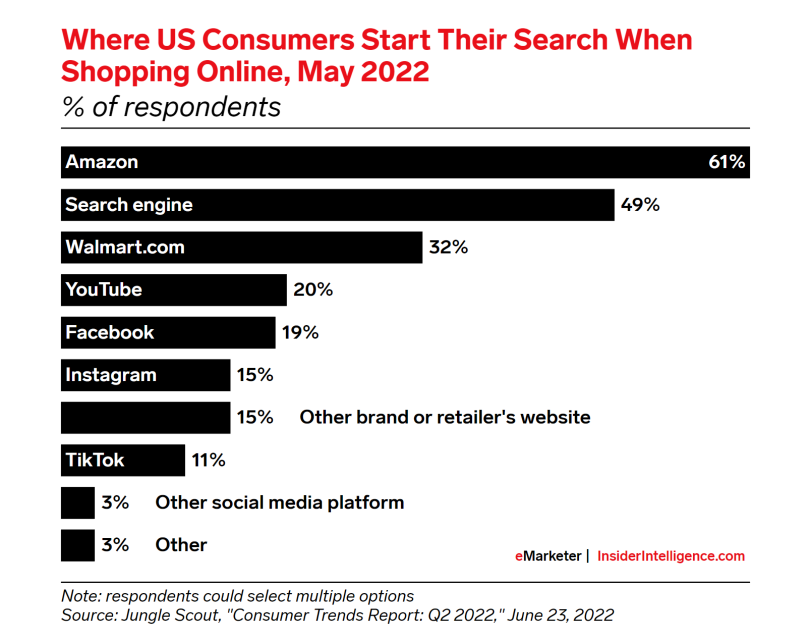 Ecommerce has turned into a main focus for most major tech companies because of the fact that this is the sort of thing that could potentially end up allowing them to leverage their user bases and profit off of them greatly. While Meta and Google have made their own forays into the world of ecommerce, and Chinese companies like Alibaba have done much to diversify offerings, the reigning regent of the ecommerce sector continues to be Amazon with all things having been considered and taken into account.

According to a report recently released by Insider Intelligence, around 61% of searches for products done by Americans originate on Amazon. With all of that having been said and now out of the way, it is important to note that search engines like Google are falling well behind, with only 49% of product searches starting off on those platforms. This is an interesting revelation, since it suggests that Amazon is one of the few companies that have managed to challenge the dominance of search engines such as Google in terms of helping customers find the products they are looking for.

Coming in third is Walmart with about 32% of searches, and it should also be noted that YouTube is where 20% of these searches start off. Combining YouTube and Google gives the tech giant a bit of a lead on Amazon, but it still suggests that there is no single entity that is capable of challenging Amazon’s supremacy in this particular sector.

Another interesting tidbit that can be found in this information is that around 11% of product searches are now starting on TikTok. 11% might seem low, but in spite of the fact that this is the case TikTok is a very new platform and its surge in popularity suggests that it has a strong chance of toppling Amazon in the near future. Its popularity among younger users as well as a slew of new ecommerce oriented features and upgrades to the platform make it a contender for the top spot, and that will spell bad news for Amazon in the long term.

Read next: Research Into US Citizens’ Purchasing Patterns Reveals That Smart Tech Continues To Remain A Profitable Marketplace