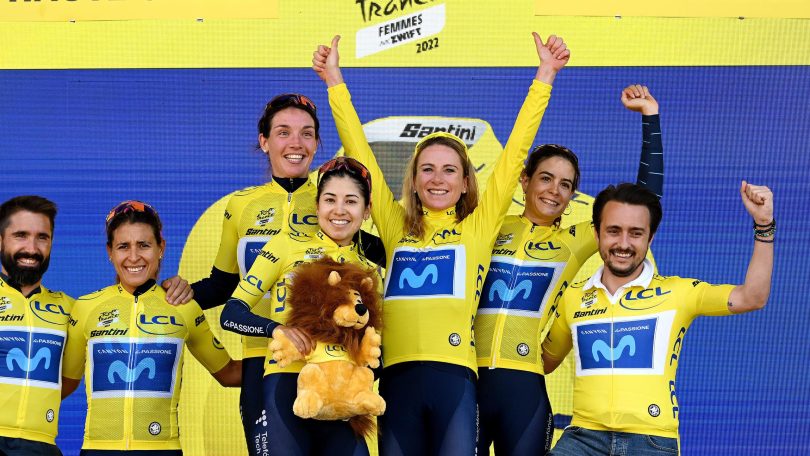 The 39-year-old made a decisive general classification move on Stage 7, putting time into all her rivals and led Demi Vollering (SD Worx) by 3’14” ahead of the final stage – a 123.3km ride from Lure to La Super Planche des Belles Filles.

The Dutchwoman said pre-stage that protecting yellow was her sole aim on Sunday, but with 6km to go she kicked clear and none of her rivals could adequately react, leaving Van Vleuten to seal the overall win with a stunning Stage 8 win. All alone she battled the steepest gradients, and slippery gravel surface, spinning her wheels to the top of the celebrated climb.

Vollering took a fully earned second place to seal the Queen of the Mountains jersey, while Silvia Persico (Valcar – Travel & Service) crossed the line in third place on the stage, ahead of Kasia Niewiadoma (Canyon Sram) who held on for third place on the podium.

The second and final day in the mountains had a different feel to it than the first. The Grand battle of the Ballons took it out of every competitor, and while they would surely race like there was no tomorrow, because there wouldn’t be, it was impossible to predict when, where and from whom the attacks would come.

Though yellow and green were all but decided, and Vollering looked solid in second, Kasia Niewiadoma (Canyon Sram) was far from comfortable in 3rd place, 49 seconds ahead of Juliette Labous (Team DSM). The Frenchwoman, born in Roche-lez-Beaupre, a stone’s throw from the stage start in Lure, would surely attack the Polish rider. If she had the legs.

In the young rider’s competition, Shirin van Anrooij (Trek-Segafredo) held a lead of 5’12 over Mischa Bredewold (Parkhotel Valkenburg). Would that be sufficient?

The first climb of the day, the Côte d’Esmouliér, was always going to be more important than its second categorisation would imply.

Vollering held the narrowest single point advantage over Van Vleuten in the Queen of the Mountains competition at the start of the day. The younger rider knew that to retain the jersey she would likely need a bigger buffer going onto the final climb, where 10 and 8 points would go to 1st and 2nd place respectively.

On the early roads, SD Worx refused to permit much of an escape. They positioned Vollering in position at the front of the bunch, who was preparing herself to launch on the 2km, 8.5% ascent. Catching Rachel Neylan (Cofidis) just before the summit, Vollering snatched the five points on offer, giving her a much more comfortable six point lead in the competition.

Only then was a breakaway given their licence.

As Vollering drifted back to the bunch, ten riders, led by Leah Thomas (Trek-Segafredo), went on the attack on the descent. Within 10km they had established a lead of more than a minute. Although it would, for a time, tick towards two, it was never likely to be enough to go to the line.

The subsequent run-in to the Ballon d’Alsace, the first category 1 climb of the day, was marked mainly by mechanicals for the yellow jersey. Van Vleuten first experienced a mechanical on the descent of the Esmoulier, obliging a swap to the bike of team-mate Arlenis Sierra, and forcing her to chase hard to regain contact with the peloton.

Still she was not happy with her vehicle. Soon after returning to the bunch she switched again, from the full yellow Canyon Aeroad to a black one with yellow bar tape. Another effort to get back on, as Demi Vollering increased the pace, might have proved too much for any other rider. Not Van Vleuten who was soon bossing it back at the head of affairs.

The breakaway went up and over the Ballon d’Alsace, sweeping up the points and ensuring that Vollering only needed to stay within two places of Van Vleuten to finish in polka dots. The super steep Super Planche des Belles Filles appeared to suit the SD Worx rider better than the Movistar star, with both climbing better than anyone else on the road.

‘First I have to finish!’ – Vos on adding green jersey to collection

In the break, Mavi Garcia (UAE Team ADQ) held out some hope, and as such was prepared to put in the work for the ten riders in her company.

The Spanish national champion led them towards the foot of the final climb, their lead becoming more slender by the minute. On the flatter roads, Canyon Sram had taken things up at the front of the peloton, while Leah Thomas also dropped back in support of Elisa Longo-Borghini.

After a few uphill kilometres, the road became the climb proper. First Pauliena Rooijakkers (Canyon Sram) attacked, with Garcia fighting to get on terms and ensuring she would, at least, be the last woman standing.

When the bunch themselves began climbing, despite holding a rock solid advantage, and only needing to defend, Annemiek van Vleuten was in no mood to take prisoners.

6km from the summit was where she decided to attack, quickly making her way up to team-mate Paulina Patino. Vollering shifted down a few gears, dipped her head, and pushed away from the rest.

A thousand metres later, through a left-hand hairpin, Van Vleuten accelerated again, around Mavi Garcia to become the first rider on the road. Less than a minute later a tempoing Vollering also passed the Spaniard.

Further back the race for the final podium place, and the top ten in general classification was on. Niewiadoma knew Labous was the one she had to watch out for, setting a strong pace and making sure to keep the French rider behind, and to her right.

With 3km on the stage remaining, as the road really began to steepen, Van Vleuten held a still slender advantage of half a minute and seemed to want to find more time. Over the first summit and onto the gravel she knew the finishline was not far off, though it would feel like an agonising age before she got there.

Vollering rose out of the saddle, looking more comfortable than she had throughout stage 7, desperate to find something more. The overall was beyond her, but the stage could perhaps still come her way.

Van Vleuten battled the rough surface, back onto the tarmac, and sailed across the line for a famous, important victory in yellow.

All is right with the world.

Stream the Tour de France Femmes live and on-demand on discovery+. You can also watch all the action live on eurosport.co.uk.