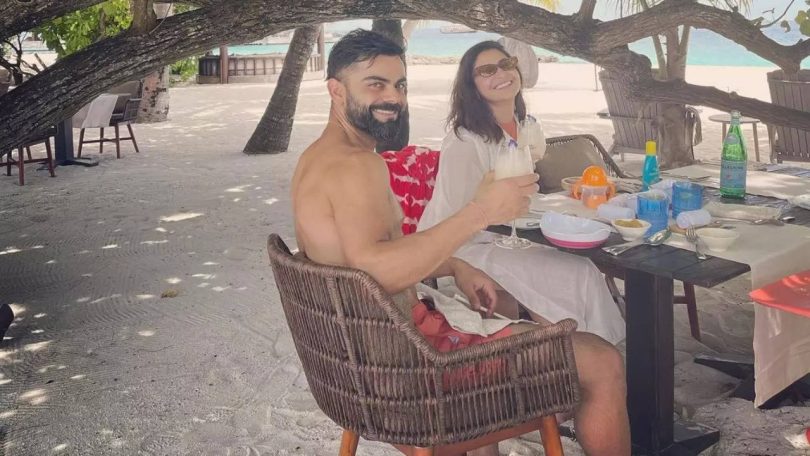 Anushka Sharma all smiles as she poses with Virat Kohli in PIC from beach vacay. Netizens gush over ‘King, Queen’

Bollywood actress Anushka Sharma and her cricketer husband Virat Kohli never shy away from engaging in social media PDA. From sharing mushy pictures with each other to penning sweet love notes, they know how to leave netizens in awe. And Virat’s latest post had the same effect on Virushka fans.

The cricket star on Saturday treated his fans and followers to a new Instagram post. He shared a picture with his wife from their beach vacation. As always, it sent the internet into a mush meltdown in minutes.

The photo posted by Kohli shows him posing shirtless as he dines with his gorgeous wife on a beach. They are seen seated under a tree and enjoying beautiful blue waters. Anushka is clad in an oversized white coverup. Their million-dollar smiles are the highlight of the adorable image.

Virat shared it with just a heart emoji. Take a look here:

Virat and Anushka often take time off their busy schedules for family trips. After ringing in the new year in Dubai, they headed to Vrindavan with their daughter Vamika Kohli. The duo paid a visit to Baba Neem Karoli Ashram, Maa Anandamayi Ashram and other places there to seek blessings. Several pictures and videos had surfaced online.

Anushka Sharma, who was last seen on the silver screen in 2018, is all set to make her acting comeback. The actress will be seen in sports drama Chakda Xpress, which is based on the iconic Indian pace bowler Jhulan Goswami.