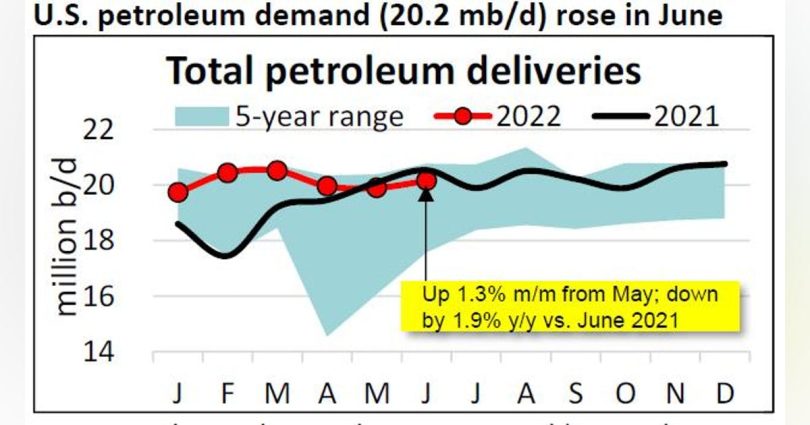 US petroleum demand, as measured by total domestic petroleum deliveries, was 20.2 million b/d in June, according to the latest monthly statistical report by the American Petroleum Institute (API). This reflected an increase of 1.3% seasonally from May, which was less than half of the average seasonal increase of 2.7% per year between May and June between 2012 and 2021. The 20.2 million b/d in June also reflected a decrease of 1.9% y/y compared with June 2021, the largest percentage gap so far this year below 2021 monthly levels.

Gasoline motor gasoline demand (9.1 million b/d) continued to grow with the summer driving season. Consumer gasoline demand, measured by motor gasoline deliveries, was 9.1 million b/d in June. With the summer driving season, this reflected an increase of 0.4% from May, but lagged the average 2.9% seasonal increase seen between May and June in 2012-2021. The 9.1 million b/d of demand was also down 2.3% y/y compared with June 2021—a third straight month in which gasoline trailed its year-ago levels and coincided with historically high monthly US nominal gasoline prices, API said.

Distillate demand rose along with freight trucking. Distillate deliveries of 3.9 million b/d increased by 2.4% m/m from May but were down by 0.7% y/y compared with June 2021.

Kerosene-type jet fuel deliveries of 1.6 million b/d in June rose by 2.5% m/m from May and 15.4% y/y compared with June 2021 to their highest for any month since January 2020. High-frequency data from Flightradar24 and TSA showed that the total number of passenger and cargo flights increased by 7.8% m/m, while air passenger volumes rose by 4.8% m/m. The International Air Transport Association (IATA) also reported international air travel has rebounded and air cargo was buoyed by eased Omicron-related restrictions in China, according to the report.

Deliveries of refinery and petrochemical liquid feedstocks—naphtha, gasoil, and propane/propylene—were 5.1 million b/d in June, the second-highest reading for June since 2006. This reflected an increase of 3.5% m/m, but a decrease of 7.9% y/y compared with June 2021, which likely reflected continued emergence from the pandemic and consequently lower demand for medical plastics, films, and packaging, API said.

Natural gas-directed drilling rose by 2.8% m/m (4 rigs) to 153 rigs in June at the same time as natural gas futures prices in June at Henry Hub exceeded $7.50/MMbtu for every delivery month through February 2023. NGL production rose by 2.5% m/m to 5.7 million b/d, its highest level for the month of June on record since 1973.

US petroleum exports—crude oil and refined products—of 9.5 million b/d in June were the highest for the month on record for any month since 1947. Consequently, the US remained a petroleum net exporter of 800,000 b/d in June and averaged net exports of 900,000 b/d through first-half 2022, API said.