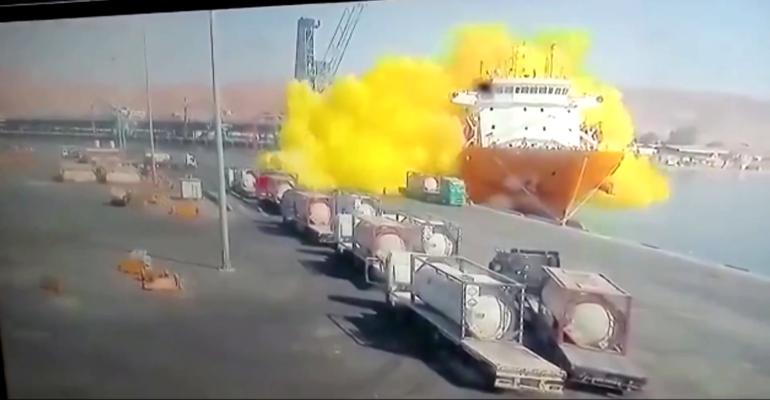 The incident, which took place on June 27, occurred when a crane line snapped, dropping a tank carrying around 25 tonnes of chlorine bound for Djibouti fell onto the deck of the ship it was being loaded onto.

State news agency Petra said Crown Prince Hussein had been stationed in the operations room of the National Center for Security and Crisis Management, since the first moments of the toxic gas leak. Prime Minister Bisher al-Khasawneh visited three hospitals in Aqaba where some of the injured were being treated. Sources said most of the hospitalized victims of the explosion would leave hospital on Tuesday.

Although Seatrade Maritime News could not ascertain whether gas from the explosion was produced by the company, Jordan’s National Chlorine Industries Company (NCI) in Amman has established itself in local and export markets in the production of chlorine, caustic soda, hydrochloric acid and hypochlorite.

A yellow gas, chlorine is used as a disinfectant and for water purification treatment, and is dangerous as upon oxidisation, it can combine with water on the lung to produce hydrochloric acid.