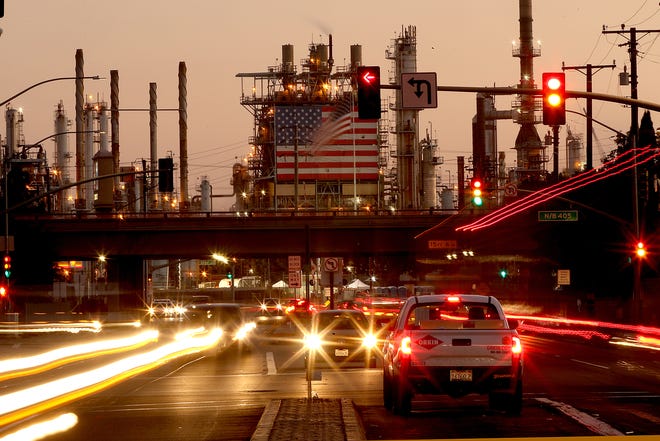 As California transitions away from fossil fuels in the years ahead to pursue aggressive climate goals, an increasing number of oil and gas workers across the state will be forced to put their skills to use elsewhere.

But just how many workers will be affected and how difficult will it be for them to acquire new jobs earning comparable salaries?

The report, produced by the nonpartisan think tank Gender Equity Policy Institute, counted about 59,200 workers directly employed by the oil and gas industries in California. And of those workers, the analysis found that two out of three will likely be able to move into new jobs in other industries without any retraining.

For workers at serious risk of displacement and whose skills are not as easily transferable, the report estimates that the projected cost assumed by the state of California to support them with income subsidies and relocation assistance may also be far lower than prior projections.

“Our data absolutely shows that there are people who work in the oil and gas industry who will be negatively impacted by the transition to clean energy, but the big takeaway from our study is that an equitable transition is both affordable and achievable,” said Nancy Cohen, president of the Gender Equity Policy Institute.

Previous studies, including one commissioned by the Western States Petroleum Association, have incorporated a wider array of occupations in the oil and gas workforce, which led to a higher number of people considered at risk of displacement and inflated the cost of potential transition programs for fossil fuel employees.

The new report centers around a major touchstone in the debate around California’s efforts to drastically reduce reliance on fossil fuels: the adverse implications it could have on workers and how much support the state should offer.

“Studies like this and the political rhetoric they fuel make it difficult to have the real discussions we need to have about energy policy,” Kevin Slagle, a spokesperson for the association, wrote in an email. “Californians are much smarter than these groups and some of our elected leaders give them credit for — they won’t buy into simplified and ridiculous claims that don’t match what they see in the real world.”

California is progressively moving away from coal, oil and gas and investing more heavily in electricity generation and other clean energy sources. By 2035, the state will ban the sale of nearly all new gas-powered vehicles. And by 2045, state leaders have committed to reaching carbon neutrality, meaning that it will remove the same amount of carbon emissions from the atmosphere as it emits. These moves will affect workers in refineries, trucking, mining, and oil and gas fields.

Gov. Gavin Newsom allocated $40 million in the 2022-23 state budget to launch a pilot displacement fund for oil and gas workers, as well as $20 million for a pilot program to train displaced employees in well-capping abandoned oil wells. It is unclear whether the governor will put additional funding into the program in the upcoming budget, especially given the state’s projected $25 billion shortfall.

Still, Cohen hopes the data will help further policymakers’ decisions around support for oil and gas workers at risk of displacement. “A big part of what we want to do is provide solid, empirically based analysis and data to allow policymakers to make sound policy,” she said.

The Institute analyzed public data from surveys conducted by the U.S. Census and U.S. Bureau of Labor Statistics to estimate the number of people employed by the oil and gas industry, as well as their occupations and median incomes. The report’s authors then used state and federal data to analyze the projected job growth by occupation and whether other industries had room to absorb qualified oil and gas workers.

Approximately 20,000 fossil fuel workers are at risk of displacement over the next two decades as demand for their specific skills declines, according to the report. About 80% of those at-risk employees are likely to be paid less for jobs they’re able to find in other industries, the report states. Some occupations that fall under this category include underground mining machine operators, pumping station operators and oil riggers who manage drilling operations.

The Institute estimated that if the state chose to provide income subsidies and relocation support for workers who would likely be paid less in their new occupations, it would cost the state of California, at the high end, $68.9 million annually.

The Institute’s report varies widely from forecasts made in previous studies on the oil and gas industry’s impact in the Golden State.

For example, a 2021 study from the Department of Economics and Political Economy Research Institute at the University of Massachusetts-Amherst estimated that assistance programs for California’s fossil fuel workers would cost the state up to $830 million per year. Unlike the Institute’s study, which only calculated financial assistance for employees who faced pay cuts, the PERI study factored in pension guarantees and income-level guarantees for all displaced workers.

Another 2019 study commissioned by the Western State Petroleum Association counted as many as 152,000 jobs in oil and gas in California. Unlike the institute’s report, that study included gas station employees, which made up 40% of that workforce total. The study then excluded those same gas station employees from its analysis of average employee income in oil and gas industries, therefore inflating average incomes.

The institute did not include gas station workers in its study because the majority are employed by businesses with attached convenience stores and the state’s transition to clean energy is not likely to put gas stations out of business for decades to come.

Although a reduction in California’s fossil fuel industry is inevitable as oil wells close and refineries shutter, some are questioning recent state regulations and policies that stand to expedite the shrinkage.

California regulators, for instance, are considering a proposal to require that certain truck fleets in California deploy electric vehicles by 2024 and set 2040 as the end date for sales of new medium-and heavy-duty internal combustion vehicles.

Although truck drivers were not included in the institute’s analysis, Paul Sihota, president and co-founder of Smartway Trucking Co., worries the state’s policies could force him to move his business out of California, leaving some of his employees out of work unless they chose to relocate.

“Our competition isn’t all based in California and we have to compete with their rates,” Sihota said. “If that means we have to move out of state, then we’ll do that.”