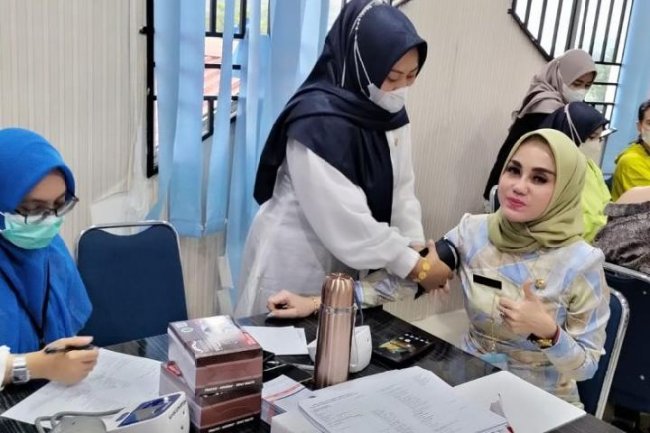 TEMPO.CO, Jakarta – As many as 4,514 of the 8,513 targeted healthcare workers in the Indonesian city of Batam have received their second booster shots amid the emergence of the XBB sub-variant of COVID-19.

The second booster shots have been provided to the city’s medical workers since August 5, 2022, the head of disease control and prevention at the Batam City Health Office, Melda Sari, said here on Saturday.

“This second booster shot is being given to healthcare workers at public health centers, hospitals, and health clinics,” she informed, adding that the city government has set a target of vaccinating 8,513 medical workers.

As of November 4, around 53.02 percent of the targeted recipients in Batam, which is located about 20 kilometers from Singapore, have been vaccinated, Sari said.

Coronavirus infections initially surfaced in the Chinese city of Wuhan at the end of 2019. Since then, they have spread to over 215 countries and territories, including Indonesia.

The Indonesian government officially confirmed the country’s first cases on March 2, 2020. To tackle the spread of COVID-19, the government launched a national vaccination program on January 13, 2021.

Meanwhile, in the 6–11 age group, the number of first dose recipients in Batam city has reached 120,814 and second dose recipients 100,844, according to the Batam Health Office.

The third dose or booster vaccination is also being provided to protect the city’s residents. The Batam Health Office said that at least 497,725 residents, including 14,859 senior citizens, have received their first booster shots.

Currently, many countries are striving to cope with the spread of the XBB sub-variant.

The Indonesian Health Ministry’s spokesperson, Mohammad Syahril, said on Friday that the XBB sub-variant has been detected in 28 countries.

In Indonesia, the ministry has recorded a total of 12 cases of the XBB and XBB.1 Omicron sub-variants.

Two of the 12 cases were detected in overseas travelers arriving from Singapore, while the other 10 cases involved local transmission, he said.