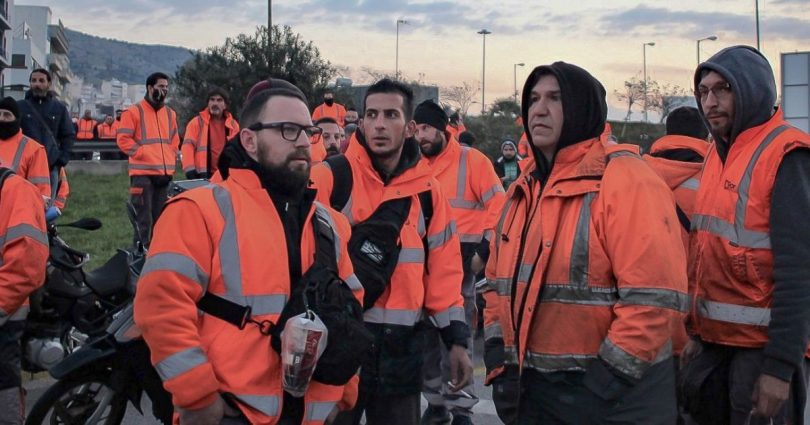 It’s 6am on a cool February day in Perama, a working-class neighbourhood of Piraeus, outside of Athens. Hundreds of dockers, most of them wearing the same orange reflective coats that they wear while working for Dport, a company linked to the Chinese state-owned enterprise COSCO, are on strike for 24 hours. Gathered at the entrance to one of the docks, they are demanding a collective agreement to improve their working conditions and pay, and bring them into line with their fellow dockers employed by the Piraeus Port Authority (PPA).

“The dockers at the other pier earn a lot more than we do. I earn €50 a day because I’ve been working for ten years, while the new hires earn €42,” says Stavros, 32. “COSCO pays less and I’m convinced that they’d pay a dollar an hour if they could, but it’s also the [Greek] government’s fault for allowing it,” he adds, to the agreement of his crew. Their problem is not with “the dockers at the other pier” they stress, who they say earn the minimum they deserve for working a gruelling, dangerous job under huge cranes and next to high-risk gears. An accident at a container pier recently cost the life of a docker in Piraeus, the second largest port in the Mediterranean.

The roughly one thousand PPA employees who work at the docks, in the offices, at the cruise ship terminals, driving vehicles and performing other activities, are protected by an agreement that allows them to earn an average salary of €1,600 net thanks to incentives. “Our bargaining starts from a minimum that we have secured over decades. The PPA is also accountable to investors who want to maintain a positive image in the public eye,” explains Giorgos Gogos, general secretary of the Dockworkers’ Union of PPA. However, the 2,100 dockworkers who work for Dport on Piers II and III lack a collective agreement that truly protects their rights. That’s why they earn less, around €1,300, and why they occasionally go on strike to demand improved training, safety and, of course, pay.

Since 2010, Dport has provided the labour for Piraeus Container Terminal, COSCO’s subsidiary for providing container terminal handling. This entire business network is referred to collectively as ‘COSCO’, the Chinese giant that controls Piraeus.

In response to a written interview with Equal Times, Dport director George Petsis denies any relationship with COSCO and refutes his critics: “In 2019, our company signed a three-year collective labour agreement with the main union [SYNEDEP]. In October 2021, as required by law, we began negotiating with that union, which represents more than 55 per cent of the workers,” Petsis explains. “The striking dockers are members of the union [ENEDEP] that represents around 20 per cent of the employees. It has a pending dispute with the other union [SYNEDEP] and is trying to challenge the validity of the recent union elections in order to prevent a new labour agreement from being signed with the legitimate representative. We are willing to discuss provisions that improve compensation and all other aspects of working conditions for our staff, provided that the union signing the collective agreement has all the necessary legal documentation,” he concludes.

Dport argues that ENEDEP is responsible for blocking the agreement, while ENEDEP claims that SYNEDEP is controlled by Dport, and that it negotiates down the benefits of the collective agreement. “There’s no proof but their public positions point to it. SYNEDEP has not called for a single day of strike, not even when a docker died in October,” says Giorgos Gogos. “Dport knows that it’s difficult to find work and it forces people to join SYNEDEP,” says Petros, a dockworker who asked that his name be changed to protect his identity.

For this reason, and because the majority organisation has the legal authority to negotiate the agreement, there is a dispute between the two unions. This standstill only hurts the dockworkers. Gogos is urging the two unions to join forces and expand their struggle: “The unions have to negotiate, to unite on certain demands, and they also need the support of the population of Piraeus. We hope that our conditions will be extended to the Dport dockers and also that Dport’s mentality will not influence the PPA.”

The dockworkers’ struggle is representative of the growing lack of labour protection in Greece, the corporate infiltration of trade unions and the greed of multinationals that take advantage of favourable laws in order to undercut benefits. Jordi Aragunde, labour coordinator of the International Dockworkers Council, sees it as the epitome of the capitalist mentality: “I was recently in Dakar negotiating with companies from France and Switzerland. Their only concern was not paying fifty cents more to people who earn a dollar and a half for 12-hour days. This is how these companies think.” However, he qualifies the comparison with COSCO, adding that “there are more opportunities to resolve disputes with Western companies.”

COSCO is the world’s third-largest container shipping company and the main shipping line of Ocean Alliance, which together with 2M and The Alliance form an oligopoly that controls almost all container traffic in Europe. In addition to Piraeus, COSCO runs the main terminal of the Mediterranean Sea’s busiest port, Valencia. It had initially obtained the concession of Piers II and III of Piraeus, dedicated to container cargo. In 2016, it became majority stakeholder of the Piraeus Port Authority through 2052, in exchange for an estimated investment of €1.5 billion (about US$1.57 billion), including infrastructure development projects and €410 million in dividends and interest for the Greek state.

Since COSCO became its majority owner, the port has seen an increase in activities, partly due to its strategic location along China’s “New Silk Road”. Although many dispute the benefit that this has had on the local economy, the increase in trade is reflected in the growing number of dockworkers employed and cargo containers distributed, which have increased from 800,000 a year to 5.3 million. “It’s close to the Suez Canal and allows the transit of cargo from big ships to smaller ones. Athens is also home to almost half the population of Greece, so you can connect the big ships with local traffic and the rest of Europe,” says Sotirios Theofanis, former director of the ports of Thessaloniki and Piraeus.

Like other global companies, COSCO acts in line with local laws. “The government supports the employers, so it’s as guilty as COSCO [for the precarious conditions workers face],” says trade unionist Margarita Koutsanellou, 55. She holds one end of a banner critical of law 4808 of 2021, which she says infringes on the right to strike and extends the working day. Today, she stands with the dockers, though her struggle is a much broader one.

“[The law] establishes a minimum staffing level of 33 per cent during a strike in the public service sector. This is a very high figure that torpedoes [a strike’s] effectiveness,” explains Ioannis Katsaroumpas, an expert in labour law at the University of Sussex. “From 2010 onwards, efforts began to decollectivise industrial relations and move from collective to individual agreements. [The ruling party] New Democracy has introduced changes to working hours, which have been made possible in part by the proliferation of individual agreements,” he continues.

Collective bargaining coverage in Greece has gone from being one of the highest in the EU to the second worst, and the economic adjustment programmes imposed by the Troika – the IMF, the EU and the European Central Bank – have been detrimental to job quality.

Katsaroumpas, co-author of a chapter on Greece of the book Collective bargaining in Europe: towards an endgame, notes that “these changes were instrumental in altering the field so that contestation becomes harder for workers.”

According to Katsaroumpas, there used to be a rare consensus on both the left and the right to protect workers. He recalls law 1876 of 1990, which “had two pillars: the favourability principle, whereby the general collective agreement could only be improved by sectoral and tertiary agreements, and the extension principle, whereby collective agreements protected not only members but all workers.” However, 2010 saw the beginning of ongoing “surgical attacks” on these principles, which were suspended and only restored after the damage had been done. “They destabilised the system. They dismantled the sectoral agreements, which were an impediment to wage deflation,” says Katsaroumpas, who argues that the government nonetheless “has mechanisms to guarantee better working conditions.”

Like so many others, dockworkers Stavros and Petros accepted the working conditions when COSCO took control of the container terminals. It was ten years ago and they had no choice – there was no work in Greece. They were promised that their rights would improve over time, but this has not been the case. A disappointed Petros sums it up: “In 2010, everyone was trying to survive. We were told that we were all one big family and that everything would be fine. It’s true that technological conditions have improved, but we expected better economic and working conditions. We feel betrayed.”