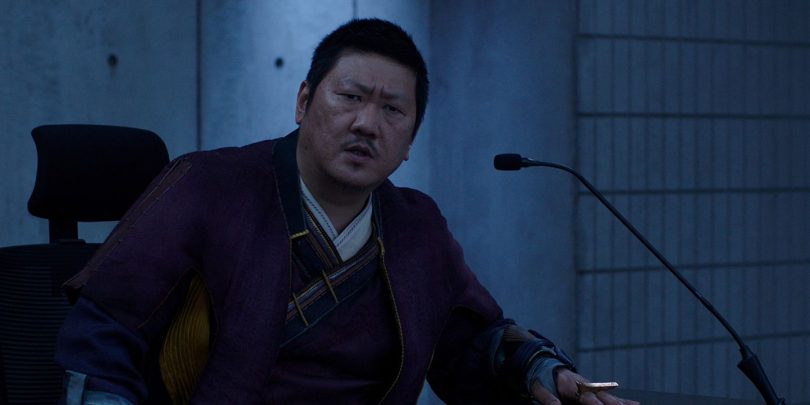 Throughout the first half of its debut season, She-Hulk: Attorney At Law sees Jennifer Walters (Tatiana Maslany) dealing with being thrust into a new world after inheriting the same gamma-irradiated strength as her cousin Bruce Banner (Mark Ruffalo). Her work as an attorney for superhuman clients has brought her face to face with Asgardian shape-shifters, actual demons, and Emil Blonsky (Tim Roth), better known as the Abomination. But Episodes 3 and 4 feature one of the biggest appearances yet with Wong (Benedict Wong), effectively cementing his status as a fan favorite character within the Marvel Cinematic Universe.

Wong is first drawn into She-Hulk during the events of the third episode, “The People VS Emil Blonsky.” During Shang-Chi and the Legend of the Ten Rings, Wong faced off against the Abomination in an underground fight club…and said fight immediately went viral on the internet, putting a serious dent in Jennifer’s defense case. Though she manages to get him to testify, Wong soon asks Jennifer for her help in suing the magician Donny Blaze (Rhys Coiro), who’s been using a Sling Ring in his stage show, which leads to a dangerous encounter with the aforementioned demons.

COLLIDER VIDEO OF THE DAY

A History of Stealing the Show

It’s been quite an interesting journey for Wong. When he showed up in the first Doctor Strange movie, he was the keeper of the records at Kamar-Taj or in layman’s terms, a magic librarian. Yet his prickly encounters with Stephen Strange (Benedict Cumberbatch) were a highlight of the film, as was his dedication to the Mystic Arts. Wong would return in Avengers: Infinity War and Avengers: Endgame, once again helping Strange battle the forces of darkness. He even contributed to Endgame‘s biggest moment as he helped Strange summon a literal army of allies to confront Thanos (Josh Brolin) and his forces — perhaps one of the best moments is his incredulous response to Strange asking if he brought everyone: “And you wanted more?!”

But Wong’s biggest glow-up so far has been ascending to the position of Sorcerer Supreme, a title most fans felt he deserved. This was first mentioned during Spider-Man: No Way Home, when Strange tells Peter Parker (Tom Holland) that Wong got the job on a technicality. But technicality or no, Wong proves to be a skilled sorcerer, especially during the events of Doctor Strange in the Multiverse of Madness. Not only does he hold his own against Wanda Maximoff (Elizabeth Olsen) but he also commands the full force of Kamar-Taj against her and manages to keep her at bay. And considering that Wanda can literally bend reality as the Scarlet Witch, that’s no small feat.

Wong has even managed to strike up some unlikely friendships during his tenure in the MCU. At the end of Shang-Chi, he tells the titular Master of Kung Fu (Simu Liu) that he has entered into a new and dangerous world due to his possession of the Ten Rings. How do you follow up such an ominous warning? Shang-Chi and his friend Katy (Awkwafina) take him out for karaoke! You haven’t lived until you’ve seen a master magician belt out the lyrics to “Hotel California.”

And this trend continues in She-Hulk, as one of Blaze’s audience members Madisynn (Patty Guggenheim) is accidentally teleported into Wong’s living room. The two seem to have formed a fast friendship, as Wong calls Madisynn to the stand during his court case against Blaze and even starts binging The Sopranos with her. (Though one hopes she doesn’t spoil any future episodes.)

In fact, Wong’s ascension to fan-favorite character mirrors another supporting character within the MCU; namely Phil Coulson (Clark Gregg). Like Wong, the S.H.I.E.L.D. agent started out with minor parts in Iron Man and Iron Man 2 before graduating to meatier supporting roles in Thor and most notably The Avengers. Fans grew to love Coulson, especially his fanboying over Steve Rogers, and were shocked when he was impaled by Loki (Tom Hiddleston). Eventually, Coulson would live again and even headline the Agents of S.H.I.E.L.D. television show.

And, like Coulson, fans are clamoring for Wong to lead his own series or even a movie. As Jennifer wryly notes in one of her infamous wall breaks, “Everyone loves Wong.”