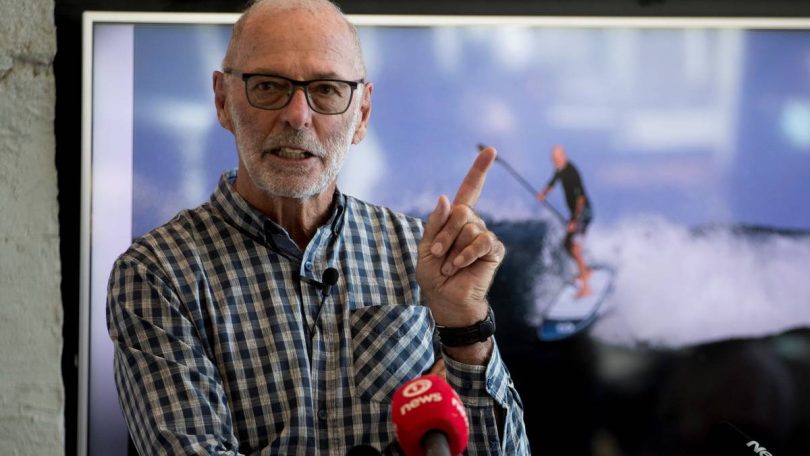 Wayne Brown at his campaign launch promised to deliver $400 million a year from Ports of Auckland. Photo / Dean Purcell

Auckland Mayor Wayne Brown is pulling back from election promises to deliver $400 million a year from Ports of Auckland and close down two council businesses.

Following briefings from the council-owned Ports of Auckland and four council-controlled organisations (CCOs) to the mayor and councillors yesterday, Brown said he was “pleasantly surprised” by the events and economic development arm Tātaki Auckland Unlimited.

Brown found some of the other briefings “a bit underwhelming”.

At his campaign launch in March, the businessman said Tātaki Auckland Unlimited – a “glorified travel agency” – and the council’s property arm Eke Panuku Development Auckland were “nonsense organisations that will simply be closed down” and whatever value returned to the council.

In an interview with the Herald in September, Brown said the two CCOs “will either be financially self-sustaining or they won’t”.

Brown today said Tātaki Auckland Unlimited acting chairwoman Jennah Wooten and her team have responded positively and strongly to the change that is afoot in Auckland and are committed to doing more with less.

“They get that you can’t artificially buy economic growth with ratepayers’ money,” he said.

The mayor remains unimpressed with Eke Panuku, whose chairman Paul Majurey has refused a call from Brown to step down.

Brown said Eke Panuku remains unable or unwilling to clearly state how much it costs Aucklanders in net terms every year, or why it needs to be subsidised at all.

After making repeated assurances during the campaign he would get the port company to deliver $200m in rates and $200m in dividends, Brown today said “there is no scenario under which the port will deliver an economic return to the people of Auckland, even if it manages to resume dividends in the future”.

“No matter how much POAL operations improve, it is never going to pay for where it is, and even the promised but yet-to-be-achieved financial returns would represent a woeful economic return on Aucklanders’ assets,” he said.

Brown said the company, under new chief executive Roger Gray, is clearly focused on operating the port more efficiently and safely than under its previous governance and management.

“The chief executive has confirmed that Auckland ratepayers have been and continue to subsidise the port and the importers who use it.

He said the briefing confirmed that the sooner Auckland’s waterfront land can move to its highest and best use under public ownership the better off Aucklanders will be.

The mayor has asked the port to work over the next five months with mana whenua Ngāti Whātua Orakei and other stakeholders, including business and community groups, on a plan and timeline to develop the area from the Ferry Building to Bledisloe Wharf into an area that can be enjoyed by all Aucklanders, with better access to the harbour including a view-shaft to the sea.

On Auckland Transport, Brown said it does not yet have answers on how it will address the current public-transport crisis, which he acknowledged is caused mainly by Wellington politicians and bureaucrats, including Waka Kotahi, the Ministry of Transport, KiwiRail and Immigration New Zealand.

“The good news is that AT has clearly taken on board the message from the Auckland voters it is meant to serve, but much more change is needed and has to happen fast,” he said.

Brown said Watercare was the “least-worst” performer in the Auckland Council group.

“There is clear evidence staff are concentrating on running Watercare efficiently and effectively and delivering improving service, but some at board level have lost focus due to central government’s calls for the unpopular and divisive ‘Three Waters’ proposal.

“No one has been able to say how Aucklanders – or Northlanders – would benefit from Northland’s water system being run by Aucklanders,” said Brown.