The jobs graph flattened in India as companies continued to pursue conscious hiring amid recession fears and inflation concerns, recruitment firm Monster.com said in its latest report on Monday. A rebound may be round the corner though.

Recruitment flattened 3 percent in August this year compared to the same month in 2021, as Indian companies continued to pursue conscious hiring amid recession fears and inflation concerns, Monster.com said in its latest report on Monday, September 12.

The recruitment firm added that while festive demand is ongoing, jobs in the country are expected to rebound in the coming quarter with positive workforce sentiments.

Sekhar Garisa, CEO of Monster.com, a Quess company, said while hiring has slowed down due to global economic concerns, his staffing firm is optimistic that jobs will bounce back with the ongoing festive season.
He also pointed to the significance of upskilling and adopting tech to ensure growth of the economy. “India continues on its tech adaptive journey with newer technologies and consequently newer skills in demand by recruiters. It is key that workforce upskilling be taken more seriously now than ever for career growth and overall economic progress,” he said. 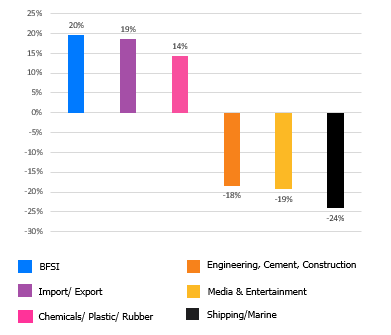 As per the MIE, industries such as BFSI (up 20 percent), chemicals (up 14 percent), real estate (9 percent), telecom/ISP (9 percent), and travel (up 3 percent) continue to do well. Retail (up 5 percent) too has fared well with a rise in hiring activity in light of the ongoing festive season.

“In August 2022, agro-based industries (up 6 percent) saw an incline in hiring activity on the back of the digital revolution, with AI, automation, blockchain, and drone tech serving as key drivers in the space. The success of agriculture 4.0, much like industry 4.0, depends on the efficient use of tech to tackle challenges that haunt the segment as a whole,” the Monster.com report noted.

The IT industry, on the other hand, witnessed an 8 percent drop in hiring due to ongoing startup layoffs, great resignations, and variable pay-out trends in the sector, the report said, adding that BPO/ITES (down 4 percent) saw a similar decline, which could be attributed to reduced hiring across metro cities.