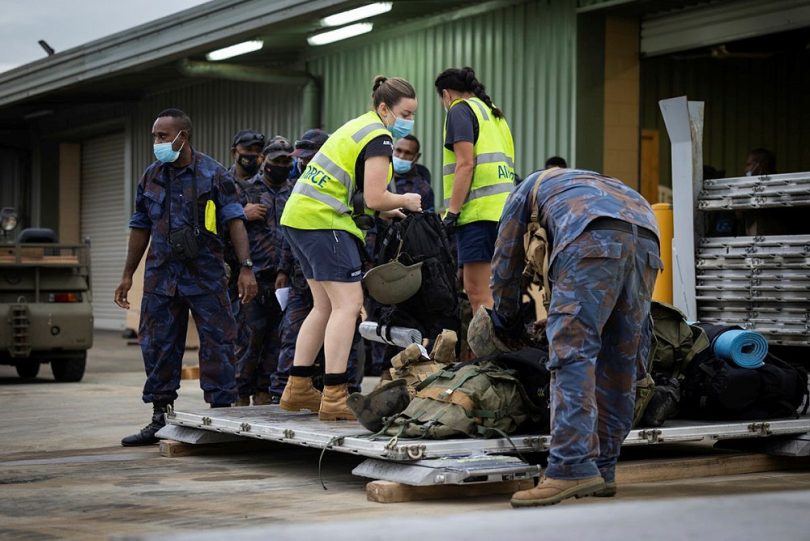 ASPI’s John Coyne is right to conclude that ‘logistics and infrastructure matter as much in major conflict today as they did in World War II’. In the broader history of conflict—of war and strategy—this realisation has come as part of a burst of interest: both topics are generally raised as issues during and immediately after a conflict before they fade, once again, to the back of our minds. Logistics and infrastructure are not the same and shouldn’t be conflated, but they do share the problem of fleeting interest. This time should be different, at least for Australia, as its important defence strategic review gets underway.

We now know that the notion of 10 years’ strategic warning time is defunct, though it is possible that we’re actually within it and aren’t acting accordingly. It’s important to be cautious when pessimism sounds profound, but it’s fair to say that three years of societal-level economic shocks are good warning that Australia should prepare for the logistics and infrastructure impacts of military crises. Addressing the logistics and infrastructure needs of hypothetical conflicts is essential, now, because the lead times for both are long and the resource demands are high.

Force posture and force structure are two sides of the same coin, with one often offsetting weaknesses in the other. Military forces are positioned to compensate for limitations in transport capacity as much as any other factor, as we have seen with US contributions to European security for decades. The Australian Defence Force’s expeditionary and home bases situated throughout the north of the continent attest to this belief, as was expressed in the strategic policy discussions of the 1970s, ’80s and ’90s. But it will also matter that military forces can be sustained in the regions that the ADF might operate from.

Access to supply chains and civilian resources also influences where forces are based and prepared. It’s timely to remember lessons from the 1999 peacekeeping mission to Timor-Leste, Operation Warden, when the unplanned deployment of 10,000 coalition forces put a tremendous strain on the Darwin infrastructure. If the defence strategic review orients force posture to Australia’s north, an in-depth conversation about what infrastructure is required for military forces must follow. When civilian infrastructure is unavailable, the ADF must be structured to support itself. Expeditionary logistics capability may be in order.

A range of civil–military measures to coordinate the development of infrastructure, if not other logistics and supply-chain issues, will be required. The needs will always outweigh the resources available to treat them, and the art of logistics and infrastructure development will come in the way that those involved in decision-making qualify, quantify and manage risks. What is needed, at the very least, is a conversation about the strategic concepts that underpin the making of decisions as envisaged in the defence strategic review.

The community of discourse on this issue already knows that the only viable solution is a collective one. There are three broad perspectives relevant to this outcome. First, the military perspective looks to the potential circumstances of operations and produces concepts that reflect strategic guidance and enable logistics requirements to be determined. The question for the military planner is not necessarily whether the requirements can be met now, but whether the infrastructure can be made ready when it is needed.

The second perspective is civilian (government and industry) in nature, and reflects an adaptive culture that allows their organisations to react to new situations and to meet new demands. They need to know what it is the military wants so that they can get on with providing it. Governments and their agencies, and local communities, have their own challenges to overcome, as do industry and infrastructure leaders. Routine consultation as well as sharing of concepts and plans will be required to enable these groups to contribute to overcoming logistics and infrastructure hurdles.  Providing incentives for results might also be a consideration, if not a necessary step.

The third group of views comes from the defence analysts and commentators who often observe the occasional non-communication between the other two groups, and are not necessarily beholden to balancing a perception of need against the availability of resources. It goes without saying that a range of views on Australia’s strategic infrastructure is important given Australia’s strategic circumstances. Such views may offer valuable alternatives to conventional planning. Naturally, self-discipline is required so that conversations don’t become ‘all care with little responsibility’.

What all can agree on is that an investment in military capability must come with an investment in strategic infrastructure and logistics support. It doesn’t matter whether logistics come from a military or a civilian origin, but it does matter that all involved know what resources are coming from which source and what infrastructure is available to maximise their use.

A national-level conversation on civil–military cooperation, strategic support arrangements for contingencies, and whole-of-nation preparedness is warranted after the defence strategic review. Without such analysis, it’s reasonable to expect that logistics and infrastructure will launch from the back of our minds to the front of them—at a time we can ill afford.