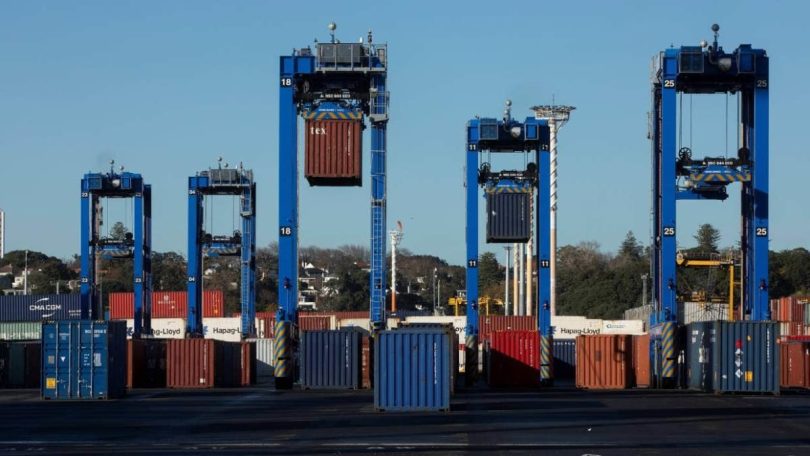 Despite a flawed first attempt, automation is still the most logical way for the council-owned ports company to meet future demand – but green-lighting a second attempt may prove difficult

Analysis: No matter how you look at it, Ports of Auckland’s automation project was a public relations shit storm, but the business will be forced to revisit and rejig the idea to stay relevant in the changing face of global shipping.

In the wake of the scathing independent report into what exactly went wrong with Ports of Auckland’s costly automation exercise, the project’s champions have come out and said new management erred in their decision to cancel it.

Both former chair Liz Coutts and former chief executive Tony Gibson told Newsroom backing out of automation would have a lasting impact on POAL’s ability to not only compete with Tauranga but to service changing shipping demand.

New management seems to see some truth in that, but politicisation of the issue could make it more difficult to revisit automation down the line.

The port’s decision to cut its losses with the underperforming system, made in June after six years of delays, meant the port had to write off $65 million in automation software.

The write-off was the only tangible financial impact, showing up in the Auckland Council-owned company’s annual accounts, however losses related to reduced productivity and possible future capital expenditure to convert the automated straddles it purchased are also part of the picture.

Last week Gibson, who resigned last year, told Newsroom the new board’s decision to can the idea and the council’s behaviour meant they had failed to secure the future of Ports of Auckland, a good revenue stream and a good dividend stream.

Similarly, Coutts said without automation, the port would reach capacity sooner, “This will result in an increase in transport costs and emissions as imports will then have to be transported from other ports in New Zealand to reach the Auckland market.”

Mayor Phil Goff didn’t mince his words in response either.

Ports of Auckland’s website rightfully points out that a port’s main value is in facilitating other economic activity (estimated to be around $15 billion in GDP back in 2015), but considering the size of the operation and the value of the land it occupies free of charge, the port’s return to Council has been subpar.

In its 2022 financial year the port paid council a dividend of $14.2m, a significant improvement on subsequent years, up a whopping 281 percent, however, the payout must be seen in context.

South Port, down in Bluff, paid its 66.48 percent owner Southland Regional Council a dividend of $4.71m (equivalent to around $7.1m under 100 percent ownership) for the regions 100,000 odd residents.

By comparison, Tauranga, the country’s largest port, carried 25.6m tonnes of cargo and paid Bay of Plenty Regional Council a dividend of $54.2m for its 54.14 percent stake.

New chief executive Roger Gray and chair Jan Dawson have been tasked with turning around operations at Ports of Auckland and getting more money flowing into the council coffers. They have been vague on how they plan on doing that through their mission to “restore mana” but have explicitly not ruled out automation.

Gray opted to hold off on an interview, with the port’s communications head saying, “As you know, we haven’t ruled out automation in the future but we’re not in the position right now to say anything about what that might look like or when”

Ports of Auckland suggested Newsroom speak to Port of Tauranga about automation.

Tauranga recently embarked on an automation journey of its own, though in a much simpler form than Auckland’s ambitious attempt.

Its project involves rolling out automated stacking cranes on rail, which move containers around the terminal yard stacking them up to six high.

“It’s a question of scale and footprint that draws you to a decision to invest to intensify the ability to store more containers on the area that you have.”

Reading between the lines, POAL redirecting to Sampson could be seen as an endorsement of this simpler, less cutting-edge automation which can essentially be bought off the shelf.

Like Auckland, Tauranga is facing size constraints, with an environment court hearing on its resource consent application to extend berths and dredge 1.8 million cubic metres of seabed from its access channel pushed out to 2023.

Sampson said the only way the port could cater for an increase in containers was to have an element of automation.

The additional demand comes in part from a global trend towards fewer, larger vessels, labelled as both more cost-effective and greener than the status quo. This would flow onto greater transhipment and coastal shipping around New Zealand, currently being pushed by Transport Minister Michael Wood.

Sampson said most vessels being built in shipyard globally were able to carry around 15,000 20-foot containers, with New Zealand seeing a trickle down of larger ships.

“We think as vessels will continue to cascade globally out of other services into New Zealand, they will tend to be larger vessels than we currently have on average today.”

For some perspective, the largest container ship to ever visit New Zealand was the Maersk Antares in 2017 (probably better known for the associated cocaine bust), capable of shifting 11,294 containers.

Ports of Auckland is aware of this dynamic and has secured a resource consent to dredge the Rangitoto Channel to eventually enable “Panamax” sized 12,000 container vessels to visit the port.

Currently, the port takes vessels that carry around 5000 containers.

Such a dramatic increase in vessel size would no doubt put additional pressure on Auckland’s container terminal.

International Container Liner Committee chair and Cosco Shipping Lines NZ chief operating officer Mark Scott said it was possible for these larger vessels to visit Ports of Auckland, but that it would need to up its game.

“It’s just a matter of it becoming more productive, whether that’s through current systems or eventually another type of automation coming in to make it so more volume can be worked on the same footprint in the future,” Scott said.

Ignoring the threat of the port being moved or its operations entirely swallowed by Northport or Tauranga, and ruling out radical ideas like a “container hyperloop” for now, automation seems like Ports of Auckland’s best option at its current location if management can bring itself to bite the bullet.

If, as Gibson claims, there is a “lack of commercial acumen at Auckland Council” following the disbanding of holding company Auckland Council Investments Ltd, a return to automation could be a hard sell politically and financially.