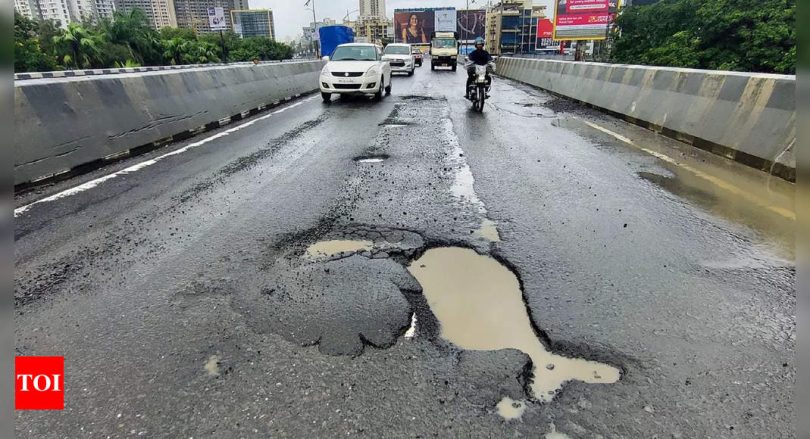 NEW DELHI: Potholes, on average, claimed 2,300 lives annually during the five years from 2016 till 2020, according to government data.
To curb such deaths, Justice Devan Ramachandran of the Kerala high court said, “I hereby direct the district collectors to act proactively to avert ‘man-made disasters’ on the roads; and I caution them that every further accident will have to be explained by them in future.”
The HC also said that the central government, particularly the road transport and highways ministry, has a specific role to play with respect to the principles of “Constitutional Tort” when somebody is killed or injured in an accident on the National Highway. This means that the authorities can be held accountable for the action of their agents, including private developers engaged by them and their officials.
Sources said the National Highways Authority of India (NHAI) will soon launch an online system and a mobile application, enabling road users to report any pothole or damaged portion (of the road). They added that timelines will be fixed for action and officials failing to do so will be penalised. In fact, potholes on NH stretches can become more fatal considering that these stretches are meant for faster movement of vehicles. For example, while on city roads the maximum speed limit is 40-60kmph for cars, these passenger vehicles are allowed to drive at a maximum speed of 100kmph on NHs.
So, the drivers get less time to react after spotting potholes to avoid crashes.
This becomes more complicated since there is mixed traffic – both slow and fast moving vehicles – on most of the Indian highways.
Faridabad resident Manoj Wadhwa, who has been fighting against a construction major and NHAI in a pothole-related death of his son in 2014, said: “When high courts start taking cognizance of this issue, we have some hope.”