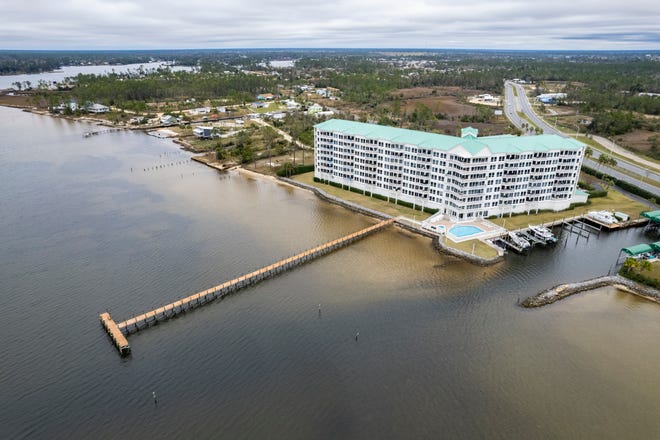 The Bay County Commissioners held a quasi-judicial hearing to consider preliminary matters regarding the McKenzie Offloading Facility in Southport.

On May 11, the Planning Official issued a development order for the McKenzie Offloading Facility owned by Hollingshead Materials, LLC. The order was then appealed by the owners of five nearby Southport properties. Appeals can only be brought by aggrieved or adversely affected parties.

The hearing focused on whether the appellants meet the definition of an aggrieved or adversely affected party. Bay County officials voted to put off any decision until their next meeting on Aug. 16.

The proposed project involves the construction of a barge offloading facility and a cement and aggregate terminal with an associated access road, parking, utilities, and stormwater management facility. The project would be constructed on a 7-acre lot on McKenzie Road.

Cement silos, like the ones proposed, are structures used to store chemicals to make cement.

Residents of the Marina Bay condominiums, who live less than a mile from the lot, protested the facility at a commissioners’ meeting on Dec. 21. Residents spoke out on the effects the silos will have on the environment, air pollution and properties surrounding the lot.

The lot has been zoned for industrial use but is surrounded by residents’ homes.

During the hearing, each side had 20 minutes to state their case. Hollingshead Materials’ attorney Lisa Minshew touched on how they have already been through a lengthy process to show the facility was needed for the growing area and the claims made by the aggravated parties do not have standing.

“It says that if you have an interest that this county’s land development code and comprehensive plan protects, that any person can come to this board and say, ‘Hey, this is my interest that’s protected by your own laws and regulations and I’m here to tell you it’s been violated in some way,'” Bush said. “That’s what the citizens have asked to do and that’s what we alleged in our appeal.”

Bush gave up most of her time to allow the appellants to voice their concerns, speaking out again about concerns about the environment, noise, air pollution, light pollution and effects on boat ramps.

“I do live there and (my wife and I) enjoy taking the golf cart up one block away,” Southport resident James Solina said. “It’s just an inappropriate level of intensity on a small, aged, industrial site. I’m sure there are industrial uses that would be compatible with the residential all around it… it’s ridiculous.”

Jim Mitchell, another resident, said he’s on oxygen every night and is worried about how this will affect him at the Marina Bay Condos. He said along with himself, that 63 residents also protest the facility.

After hearing both sides, Bay County officials were torn on the issue. They ultimately decided to move forward with the Aug. 16 hearing to allow more time to come to a decision and allow residents’ voices to be heard.

“It’s got the correct zoning but that doesn’t always mean it’s the correct use,” Carroll said. “That’s something we’ll have to look at. If that development order is adequate or not, this will probably end up in a circuit court and let a judge decide.”

He added he was not surprised by the number of residents in the meeting who wanted to make their voices heard about the proposed facility.

“I think it’s always great for citizens to get involved… it shows their passion,” Carroll said. “It’s their neighborhood. It’s their home… the largest investment you’ll make in your lifetime is your home and they want to protect that asset. They want to protect our bays, and so they had the opportunity to be heard.”