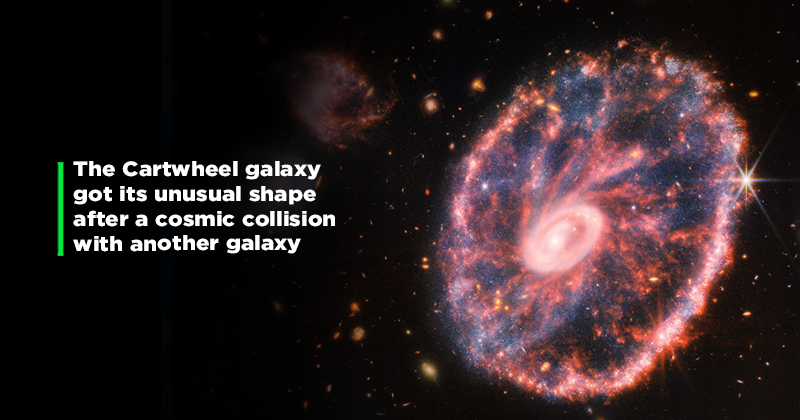 Calm down, James Webb! Actually don’t, for we love these stunning sneak peeks into the cosmos that keep getting richer, more detailed, and more mesmerising.

Now, the James Webb Space Telescope has captured another piece of space’s beauty. This time, the telescope has clicked a picture of the Cartwheel Galaxy – situated about 500-million-light-years-away!

The creation of a cosmic cartwheel

The Cartwheel galaxy was a spiral galaxy just like our own Milky Way until it rammed into a smaller galaxy about 440 million-years-ago. After this collision, the galaxy began looking more like a wheel – with a central bright ring of star clusters. The outer ring of this galaxy is dominated by stars dying in supernovae.

The final image of the Cartwheel galaxy is a combination of data from James Webb telescope’s Near-Infrared Camera (NIRCam), and the Mid-Infrared Instrument (MIRI). With NIRCam, scientists are able to see through dust and gas to see how young stars are born in far-off cosmos. These show up as blue, orange, and yellow.

MIRI is able to help scientists with detailed structures of dust and gas that NIRCam is able to see through. As The Independent reported, MIRI reveals silica dust and hydrocarbons that appear as red in the image. Owing to this, giant “spoke-like” structures seem to appear in the wheel.

Also read: James Webb Space Telescope Captures The Depths Of Our Universe On A 68 GB SSD

According to a NASA blog, the galaxy will help scientists improve their understanding of how the galaxy is evolving after the collision. The galaxy was earlier imaged by Hubble Telescope in 2018.

What do you think about this stunning image? Let us know in the comments below. For more in the world of technology and science, keep reading Indiatimes.com,