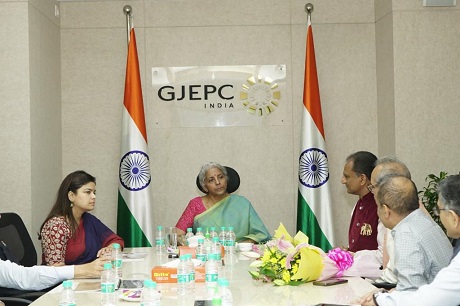 Bharat Diamond Bourse in association with Gems and Jewellery Export Promotion Council was host to the launch of a book on Prime Minister Narendra Modi’s 20 years collectively, holding the position of Chief Minister of Gujarat for 12 years and as Prime Minister of India for 8 years. The book called ‘Modi @ 20’ has 20 hand-picked individuals, professionals, changemakers and influential individuals who have achieved specializations in their own capacity and have worked and known the PM personally; they have shared their experiences in this book that has a foreword by Lata Mangeshkar.

Prior to the event, the Finance Minister graced her presence at the newly launched GJEPC office at the BDB. The book launch event started with the presentation of floral offerings and a framed souvenir to the Chief Guest of the evening, Finance Minister, Nirmala Sitharaman and the other dignitaries present on the stage. An introduction to the book Modi @ 20 followed where the book was described as a compilation of opinions and methodology “Vyavastha Parivantanachi Vees Varsha” meaning 20 Years In Change Management that was penned by 20 varied authors who had first-hand experience with the PM and seen change brought about with his dynamic efforts. Madhav Bhandari then took on the stage and welcomed the dignitaries present and mentioned that Pradeep Gupta was one of the authors among the 20 who had written about the PM. Poonam Mahajan was next to speak. Ashish Shelar was the next speaker who was introduced as being an avid reader and he summed up the PM’s work into 3 C’s that connect to the diamond trade. He said, “Connect, Commitment & Communication” are the three C’s that PM Modi has shown in the 20 years of his overall leadership with the words “Avyavastha se Vyavastha Tak” describing his 20 years of service in words. Nirmala Sitharaman, the vibrant Finance Minister of India then took to the podium to speak. The Finance Minister spoke about the various authors who had written in the book calling them “people who have achieved specialization in their fields in their own capacity.” She added 2 more C’s to Modi’s credit, “Courage of Conviction,” she noted and quoted the slogan “Sab ka saath, sab ka vishwaas, sab ka vikaas and sab ka prayaas.” Sitharaman then spoke of the ‘Annyojna’ that empowered women.

Nirmala Sitharaman said the PM spoke of Governance with Conscience stating that the PM never referred to backward districts as ‘backward’ rather; he called them ‘aspirational districts.’ She concluded her speech noting that the book Modi @20 was full of management lessons and that each chapter revealed the author’s opinions. It was Modi’s style to listen to collective opinion with complete attention before he gave his, and that, she called ‘Collective Governance’ adding that Modi was one to take responsibility and never shirk from duty. Modi @ 20 would befit as a management textbook on governance in a country, as it shows how to think for a nation. If read to kids, it would instill the spirit of nationalism and patriotism into them.

Anoop Mehta who gave the final vote of thanks in his short speech mentioned that this was the Finance Minister’s 4th visit to the Bourse and added that the fist rally of Modi, when he was nominated to be the PM, had been organised from Bharat Diamond Bourse. The book was available at the venue for Rs.800.