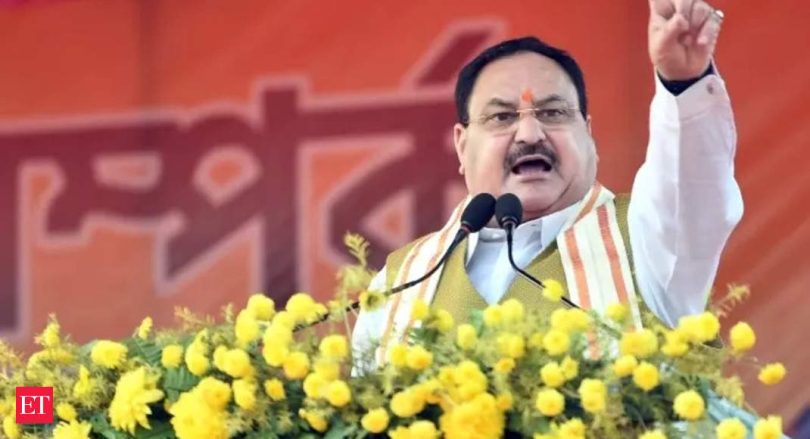 BJP president J P Nadda on Friday gave a new term ‘HIRA’ to the development lexicon, highlighting that the central government’s focus has been on highways, internet, railways and airways. He also said when the entire world is reeling under a financial crisis, India has become the world’s fifth-largest economy, surpassing Britain.

“Today, I say that development means HIRA — H for Highway, I for Internet, R for Railways and A for Airways,” Nadda said addressing a public meeting in Ghazipur.

“Today, when I was coming (from Kashi), I saw Ghazipur has changed a lot. Earlier, it took hours to reach Ghazipur from Kashi. Today, it took just one-and-a-half-hour,” he added.

He also said India’s growth in electronics has been six times higher and the export is Rs 70,000 crore.

Referring to the Centre’s direct benefit transfer (DBT) initiative, Nadda said, “There was a time when the country’s prime minister used to say that he sends Rs 1 and only 15 paise reaches (the beneficiary). Where does 85 (paise) go? But, today, through direct benefit transfer, Rs 6,000 is transferred into the accounts of lakhs of farmers.” He was apparently referring to former PM Rajiv Gandhi’s remarks in 1985.

The BJP national president said under the leadership of Chief Minister Yogi Adityanath, Uttar Pradesh is moving forward by leaps and bounds.

“During the government of Akhilesh (Yadav), when we used to send money, it used to go somewhere else as there was a hole in the bowl (of the state government). No work was done on the ground using that money,” he alleged. Nadda also said during the COVID-19 pandemic, India sent vaccines to more than 100 countries.

The BJP chief asserted that the image of the villages is changing. “Under the Pradhan Mantri Gareeb Kalyan Yojana, free foodgrains are being given to the poor, oppressed, deprived (sections of the society) and Dalits”.