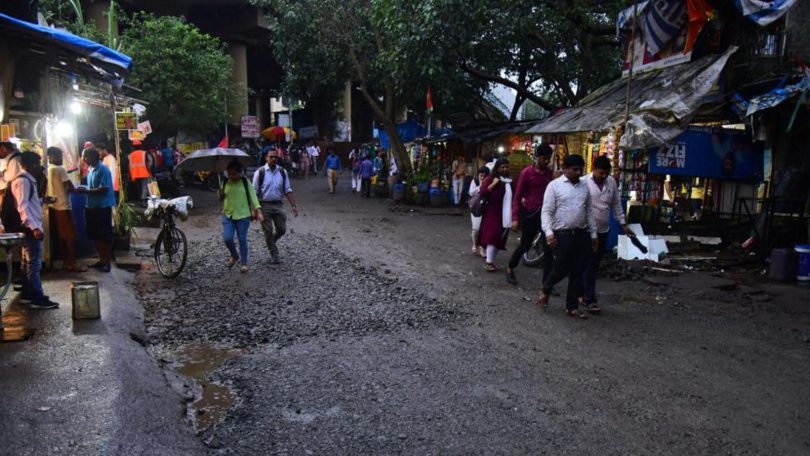 Mumbai: Following a Hindustan Times report on the plight of citizens forced to traverse the 200-metre pothole-filled stretch outside Ram Mandir railway station (east), whose maintenance was under a cloud with the Brihanmumbai Municipal Corporation (BMC) and Western Railway passing the buck to each other, officials from both agencies visited the site on Wednesday and conducted a joint inspection.

The BMC also began temporary repair work on this stretch on Wednesday, filling the potholes with sand and stones, and levelling the road. The civic body also put up a barricade to prevent vehicles from entering the stretch and to make it safe for pedestrians. The road is in possession of the Court Officer of Bombay High court, owing to a private dispute, officials said.

Rajesh Akre, assistant municipal commissioner, P South ward, said “Following your report, I visited the site along with my team and senior estate officer of railways. This is private land. Since there is a railway station exit here, about 200 meters of this land is used by officer goers to reach nearby business parks. I can understand the plight of office goers due to the poor condition of this path. Although it is private land, we have initiated some temporary remedial work.”

On September 21, HT published a report highlighting a citizen’s efforts to pin the agency responsible for maintaining the road outside the station, which receives heavy footfall with a business park in the vicinity. The condition of the road had deteriorated over the past few months, and locals and office-goers had sought the authorities’ help to no avail.

Freya Mistry, a 27-year-old banker, filed a complaint on the Rail Madad platform (a space for grievances by Indian Railways) and Aaple Sarkar Portal (run by Maharashtra government to register grievances). While the civic body responded saying the road is under railway’s jurisdiction, the latter’s response on the Rail Madad app was that the onus was not on the railway department, she said.