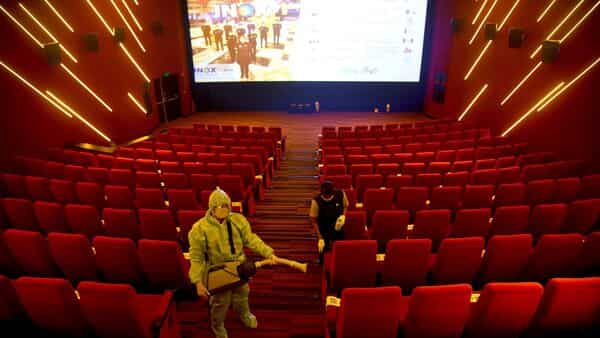 The pattern is easy to follow: Hussain expends his time, money and energy only when his beloved Hollywood franchise comes out with a new offering. Ask him about Hindi movies and there is an indifferent shrug. But he is quick to add that while Hollywood offers a heady mix of action, drama and fantasy, he feels a similar immersive experience from southern language films, right from the Baahubali franchise to the action-packed RRR and Pushpa: The Rise.

Over 150 km away, in Haryana’s Panipat, 21-year-old Sagar Rai is an avowed Marvel movie fan. While he is yet to warm up to the southern wave, he has a bone to pick with Brahmastra, Bollywood’s own superhero franchise. “They went completely overboard with the VFX and there was no plot to speak of. The issue with Bollywood is they lose focus while telling stories, the narrative is stretched too long and the effects just feel overdone. With Hollywood, everything feels organic,” says Rai.

Rai and Hussain are reflective of an audience base, mostly Gen Z, which is increasingly losing interest in Hindi cinema in India’s small towns, especially in the northern belt. While they find greater appeal and aspirational value in Hollywood action and superhero flicks, they see a better connect and rootedness in the dubbed versions of south Indian movies, with their right blend of story and spectacle.

Small-town India is also getting increasingly weary of the growing Bollywood trend of ‘social message’ films that dive into subjects such as homosexuality or live-in relationships. Moreover, the reach of satellite TV and streaming platforms and the access to regional content, especially from the south, has exposed moviegoers from Bhiwadi to Bareilly to a language of cinema, deeply rooted in culture yet far more evolved than mainstream Bollywood.

Theatre owners in states like Bihar and Uttar Pradesh corroborate this disconnect between Hindi-speaking youth and popular Bollywood stars. They continually lament the inability of younger names like Ranveer Singh, Ayushmann Khuranna, Rajkummar Rao and Kartik Aaryan to ensure a robust opening for a film. Simply put, none of these actors can draw audiences based on the sheer guarantee of delivering an entertaining, paisa vasool (value-for-money) sort of experience, the way a Salman Khan could until a few years ago. In contrast, leading stars of southern movies are becoming household names in the Hindi heartland. In Panipat, for instance, a poster of KGF star Yash adorns entry gates to barber shops and local vendors sell T-shirts displaying Allu Arjun’s rogue character from Pushpa smoking a beedi.

Their pan-India popularity is in turn paving the way for wide theatrical releases. Top multiplex chains such as PVR, Inox and Cinepolis expect the share of southern language films to rise to 55-60% this year from 40-45% prior to the pandemic, according to trade experts. Dubbed versions of popular southern language films could add ₹300-400 crore to annual Hindi box-office collections, say experts. Other than big franchises like KGF and RRR, small-scale southern films like Kantara, 777 Charlie and Karthikeya 2, which are entrenched in local sensibilities and often tell deeply personalized stories, have also found favour in recent months.

Single-screen theatre owners in Bihar and Uttar Pradesh say that Kantara, released around the same time as Bollywood star vehicles Ram Setu and Thank God, was their prime draw for the Diwali weekend. At least two of the four daily shows in a single screen were allotted to the Kannada folklore drama, despite the dominance of Hindi film distributors who are known to insist on higher showcasing.

Language or the cultural setting doesn’t appear to be a barrier for cinephiles in the heartland, especially when Hindi filmmakers are failing to speak their language or tell stories that matter to them and fascinate them.

“I love the Marvel Cinematic Universe. Everything in Hollywood is done on such a large scale, their sets, their VFX, their action. It blows your mind. In Hindi films, on the other hand, they’re still using tropes that we’ve known forever. Take Brahmastra, which is meant to be a superhero film, where the final takeaway still is that love is a big deal. We all know Bollywood is known for its love stories. Par ab ye sab purana ho gaya (but this has grown too old),” says Hussain, who follows all Marvel characters and their individual tracks.

His favourite character is Doctor Strange and while Chris Hemsworth used to be his favourite actor, Benedict Cumberbatch has swiftly and unsurprisingly taken over. He says while it’s alright to watch a Hindi film once in a while, he’d rather do so at home with the family. “Hollywood remains my favourite,” he says, adding that he has more recently discovered fantasy dramas like Game of Thrones and The Witcher on streaming platforms that he prefers to watch, dubbed in Hindi of course. But if it isn’t available, he would still watch the original English version.

This is a post-pandemic phenomenon, where audience tastes are aligned not just nationally but globally, explains Vishek Chauhan, an independent Bihar-based exhibitor. Five years ago, a Kannada film like Kantara would not have made ₹70-80 crore in the Hindi belt, he says, adding, “It would have been taken off screens by the time anyone found out about it.”

Post covid, the level of awareness among audiences has grown manifold and they can sniff out winners across the world. Those in the age group of 12-15 years no longer identify with an Akshay Kumar or a Salman Khan—there is a far more aspirational value attached to being part of something bigger like the Marvel Universe. He says these are brands with depth and meaning sustained over years and the youngsters recognize that.

Hussain recalls watching Captain America: Civil War at home in 2017 and being blown away by the stunts. “I followed that up with Thor: Ragnarok and realized the same character had appeared in the older film too,” says Hussain, who soon began reading up on the franchises and connected the dots and plots.

“The youth know that Marvel will not cut corners or cheat them. It is structured, assured entertainment, and comes with the credibility that Bollywood doesn’t have. Theatrical entertainment, going forward, will be branded entertainment. Rocky bhai (Yash’s character from KGF) is as much a brand as Spiderman. On the other hand, Bollywood doesn’t have much to offer audiences, it’s seen as boring, preachy and pedantic and nobody wants to spend ₹500 for hokey homilies or gyaan,” says Chauhan.

Hindi films have nothing new to offer, says a college girl at Mathura’s Highway Plaza, a three-storeyed shopping centre, on a blazing November afternoon. She and her friend have come, braving the sun, wrapping their heads with dupattas, for a show of James Cameron’s Avatar: The Way of Water. They seem crestfallen when told that the film is scheduled for release mid-December and the standee at the theatre is only meant for promotions. “We’ll come back and watch it. It’s fun to watch Hollywood films, they are the right combination of action, effects and drama,” says one of the girls, declining to be named. While she feels older stars like Salman Khan, Shah Rukh Khan, Akshay Kumar and Ajay Devgn are becoming repetitive, she quite enjoyed Kartik Aaryan’s Dhamaka, a Netflix original.

Trade experts like Chauhan refer to the new crop of ‘social message’ films in Hindi cinema, on issues as disparate as erectile dysfunction, LGBQT, gender bias or live-in relationships as a phenomenon that small town India isn’t quite comfortable viewing on the big screen or streaming platforms.

“I like films that a family can watch together. That doesn’t happen with Hindi anymore so we’d rather watch a dubbed south Indian film. At least it has good action,” says Ajay Indora from Haryana’s Sonipat. A fan of both Ajay Devgn and the Fast & Furious series, this marketing professional feels Hindi filmmakers barely come up with clean entertainment anymore and cites Vivaah, a Sooraj Barjatya movie celebrating the sanctity of arranged marriages, as his all-time favourite. “They can make any kind of film, there’s nothing much one can do. Par family ke sath toh ye sab nahi dekh sakte (but one can’t watch such films with family),” points out Indora, before heading off to the first day first show of Devgn’s mystery thriller Drishyam 2.

Zulfiqar Haider, a 22-year-old from Mathura, echoes Indora’s sentiments by naming Luka Chuppi, a 2019 comedy about a small-town couple in a secret live-in relationship, as the kind of films that doesn’t make sense. “We can’t watch these with family or even friends, for that matter. Love stories are fine, but it shouldn’t get this bold,” says Haider, whose last cinema hall outing was for Kabir Singh, whose box-office success was as much a point of discussion as its portrayal of toxic masculinity. And not surprisingly, it was a remake of a Telugu hit.

A conservative audience may see in the woke films Bollywood’s seeming disregard for tradition and values, totems that southern films seem to uphold. Moreover, the turn of events starting with actor Sushant Singh Rajput’s suicide in 2020, saw a sharp and strident divide in the industry. Kapil Sharma, a 21-year-old government job aspirant from Vrindavan, alludes to the Aamir Khan starrer PK, which he says hurt his religious sentiments. “It was wrong. Do we not have feelings?” asks Sharma, who is also pained by the fading interest in the Rajput case.

Media and entertainment industry experts agree that the boycott culture has hurt Hindi films, with titles like Laal Singh Chaddha (in theatres) and Alia Bhatt’s Sadak 2 (streaming on Disney+ Hotstar) most severely hit. While it’s another matter that the content of the films in question failed to enthuse moviegoers in the first place, two years of negative publicity for Bollywood in the aftermath of Rajput’s death and the resulting debate on nepotism, debauchery, drug abuse and the industry’s toxic work culture, have ultimately spiralled into an ugly troll battle. The industry, which was floundering even before the pandemic owing to poor content, now faces more existential threats, having to wear nationalism and (dominant religious) culture on its sleeve.

“The Bollywood charm has been waning and one of the catalysts is definitely Sushant Singh Rajput’s death. It broke the illusion around big stars and led people to judge the industry far more harshly. For people already disillusioned by Hindi cinema’s tired tropes, this incident only added to the slide. The pull of OTT platforms came as the final straw in the back,” says a film critic, declining to be named.

Bollywood has much lost ground to cover. And for that, it needs to go back to its arsenal, and arm itself with more than a Brahmastra to woo back audiences. As Sharma from Mathura says, “Movie kaisi bhi ho, maza aana chahiye (in whatever way the movie is made, it should be entertaining).” That, in essence, is the bottom line.