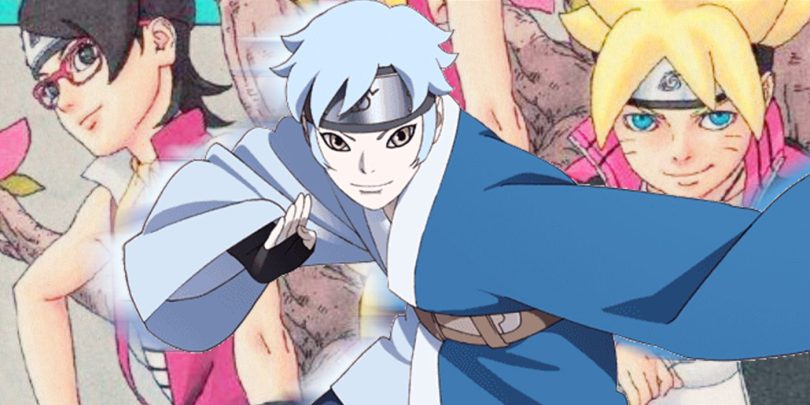 One of the most interesting recent developments in the Boruto manga has been Mitsuki’s feelings for Boruto. It caught many fans off-guard, as no one expected a romantic arc for Mitsuki in Team 7. He just seemed focused on protecting the Hidden Leaf, making up for when his progenitor and creator, Orochimaru, tried to take over Konoha.

It turns out that Mitsuki just doesn’t want to keep the village safe; he’s got a vested interest in Boruto. Sarada has noticed the crush too, which could get awkward once their other friend, Sumire, gets closer to telling Boruto she likes him as well. Interestingly, Chapter 74 has a bombshell arc play out with Eida coming to town — but as Mitsuki lays eyes on her, the manga ruins the chance to cement just how much Mitsuki really cares for Naruto’s son.

RELATED: Boruto Is Setting Up Shikamaru & Sasuke to Betray Naruto

Mitsuki Gets Entranced By Eida in Chapter 74

Chapter 74 of Boruto sees Eida fly over to the loft Shikamaru has for her to stay. The Hokage’s right-hand man wants her to become friends with Boruto and Kawaki, hoping to pacify and keep her at bay. Sadly, Eida’s love spell renders Konohamaru unconscious, leaving Daemon to then beat up Boruto and Kawaki, who, ironically, don’t feel any trance effects due to their Ōtsutsuki alien DNA.

Shockingly, Mitsuki gets caught up from afar as he spies in, eventually going on to lust for Eida. Sarada can’t believe it, because while the other teen shinobi are mentally vulnerable, Mitsuki is usually quite rigid. This isn’t the case now, however, with Mitsuki fawning over the villain just like everyone else. But as funny as it is, it’s a missed opportunity, especially in a series that doesn’t offer much LGBT diversity; a taboo topic in Boruto‘s world, it seems.

Chapter 74 should have had Mitsuki resisting Eida’s charm and not falling for her. It could have been done easily, given that Orochimaru tampered with his DNA and made him in a lab. Thus, Mitsuki, as this unique specimen, wouldn’t have lusted like the other guys as he wouldn’t be considered a ninja who craves material things. This would have spoken to just how good a scientist Orochimaru is, and maybe, the fact he does want to strengthen Mitsuki up to protect Konoha from future threats by engineering someone who would only fall for something pure.

It would continue Orochimaru’s redemption song, but more so, this would have proven Mitsuki can’t fall for Eida as he’s already in love with Boruto. Seeing as Sarada is blocking the trance, most likely due to her Sharingan, it’d once again clue her in to Mitsuki’s crush possibly being true love and him thinking Boruto’s a soulmate. It’d have been a sentimental technicality, but again, these endearing emotional loopholes have always been well-received in the franchise.

Instead, a shot at equality and inclusivity is botched. Mitsuki ignoring Eida because his heart and soul is with someone else really has a meaningful ring to it, and would have made Boruto a lot more progressive and nuanced in terms of narrative.