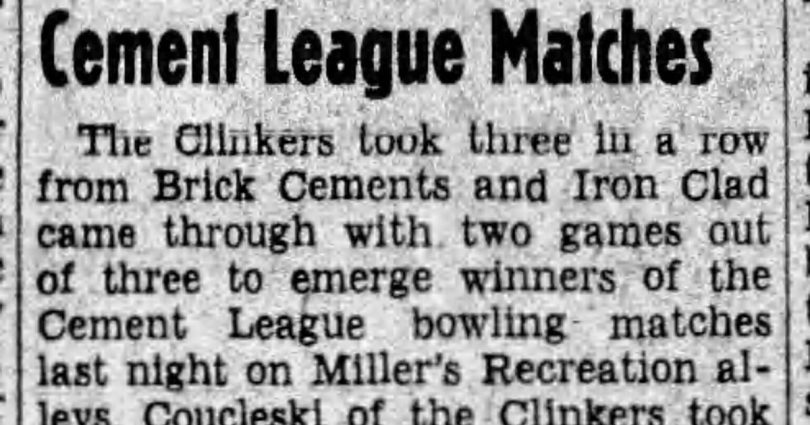 Bowling and other sports are a part of the heritage of the plant that Levi Hanson recently announced will be closed in 2023.

At times, company employees had their own leagues.

“The Clinkers took three in a row from the Brick Cements and Iron Clad came through with two games out of three to emerge winners of the Cement League bowing matches last night at Miller’s Recreation Alleys,” The Post-Star reported on Oct. 5, 1943.

Clinker is a solid material produced in the intermediary process of making cement.

It should not be confused with Mill’s Recreation Alleys in Hudson Falls.

1941: “The Glens Falls Portland Cement Co. Bowling League officially closed its season Saturday night with a banquet at High Point on the Lake George Road,” The Post-Star reported on May 12, 1941. “About 25 bowlers attended and team and individual prizes were awarded.”

“Bernie Higgins entertained with songs, and motion pictures were shown of the league bowlers in action.”

It would be great if someone has hung on to the motion picture footage filmed during the 1940-1941 season.

1931: The Cements, of Glens Falls Portland Cement Co., with a record of four wins, three losses, was in fourth place out of 11 teams in the Industrial Bowling League, that bowled at the Knights of Columbus lanes at the corner of Warren and Center streets, The Post-Star reported on Feb.13, 1931.

“The two cellar clubs in the Industrial Bowling League, Glens Falls Fleet and Standard Oil, battled last night on the K. of C. alleys with the former copping two out of three games.”

1928: The Iron Clad team was set to compete in the Wednesday circuit of a women’s bowling league at Park Alleys.

Other teams in the circuit were Alphas, Alumni, Yorke (clothing store), Mercuries and Zonta.

The league had three circuits bowling on Tuesday, Wednesday and Friday evenings at the lanes in the basement of the Park Theater.

“League bowling for women under the auspices of the Glens Falls Outing Club will get under motion for the second year at the Park Alleys tonight,” The Post-Star reported on Nov. 13, 1928. “With more women comprising the various leagues than enjoyed play in the sensational successful initial season last year, there is promise that a period of unprecedented activity in this sport is about to swing into action.”

1929: The Iron Clads, with a 1,637-point team score, placed second out of four teams in a three-game match at the Glens Falls YMCA lanes, in the building on Glen Street where Spot Coffee Co. is now located on the ground floor.

The Glens Portland Cement Co. basketball team was playing the same evening on the YMCA court.

“The rapidly improving D. and H. five of the Industrial Basketball League swamped the Cements 54 to 21 on the ‘Y’ court last night,” The Post-Star reported on Jan. 26, 1929. “Next week the Delawares battle the league-leading Commerces and they may shoot a surprise into the camp of the leaders.”

Maury Thompson was a Post-Star reporter for 21 years before he retired in 2017. He now is a freelance history writer and documentary film producer who routinely researches historic newspapers of the region.

Be the first to know