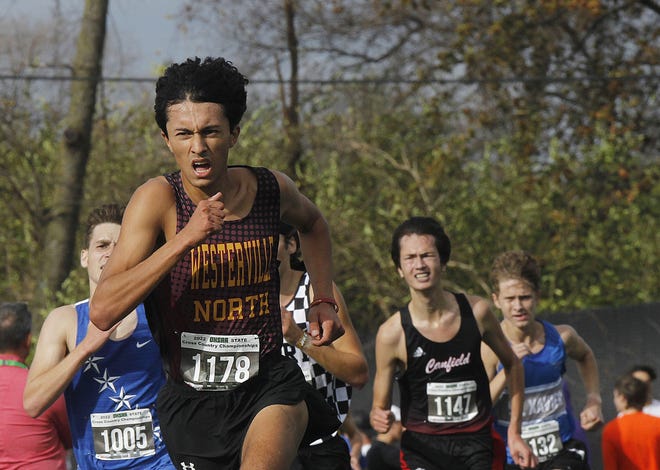 Andrew Bracken took note of the all-state athletes on display in a hallway at Westerville North, where the runners include Bob Kennedy, Jacob Dumford and Kent Ford.

Kennedy won the state cross country title in 1986 and 1987 before going on to star at Indiana University and compete in the Olympics, while Dumford was second and Ford was fifth at state in 2012.

Bracken added himself to North’s rich history by placing 24th of 178 runners at the Division I state meet Nov. 5 at Fortress Obetz, earning all-Ohio honors with a time of 16 minutes, 0.6 of a second and a place on the wall.

“The wall is something I’ve seen every day for the last four years,” he said. “You see all the runners, the idols that I’ve looked up to. And there’s definitely more that I’ve seen on the girls side or even athletes in general that you hear stories about through North’s history that are on that wall. It just means a lot that I’m now a part of it.”

As Bracken listed off his heroes, he couldn’t help but mention junior teammate Ben Gabelman, who already was on the wall after placing fourth in the 1,600 meters (4:12.15) at last spring’s Division I state track and field meet.

“I’m really proud of (Gabelman),” Bracken said. “He’s put in so much work over the last few years and he deserves every part of it. He’s been a great teammate through the last two years of cross country and three years of track.”

Gabelman said Bracken’s hard work has been an example for the rest of the team.

“I couldn’t tell you a person that works harder than Andrew on our team,” Gabelman said. “Andrew pretty much changed our entire team dynamic. The fact that it all paid off at the state meet in his senior year, for him to achieve his goal of all-Ohio, is just great.”

The competition in central Ohio prepared Gabelman for the state meet, as he placed first only two times this fall — the OCC-Capital Division meet (15:29.3) on Oct. 15 and Attica Seneca East’s Stars, Stripes and Lights (15:51.2) on Sept. 10.

“The fact that I only won two races this year and I’m the fourth-best runner in the state is kind of surprising,” said Gabelman, who was fourth (15:22.51) in the regional Oct. 29 at Pickerington North. “It is what it is.”

He added that the winds at the state meet, which reached gusts of more than 40 mph at times, didn’t bother him.

“We train in a lot of windy weather at Westerville North,” Gabelman said. “I don’t know why. There’s just a ton of wind blowing. … I was already used to it.”

“I think she ran well (at state), but she could have done better,” girls coach Johnny Jackson said. “I think nerves got to her a little bit for her first time being at state. She had a great season — a fantastic season.”