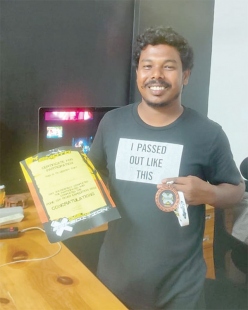 Braving the mucky roads on a trail

Franky Fernandes from Assolda, Quepem, was the only Goan participant who braved the Pune Off-Road Expedition 2022. After completing, all the challenges, he is back to Goa to share his story

Riding through mud, water and climbing hills on a bike, might not
seem like a huge challenge but if the venue is set in Panshet Valley,
Maharashtra, it certainly won’t be a walk in the park. 8 Moto recently held its
9th edition of the Pune Offroad Expedition 2022 with utmost precautions and
maintaining all safety measures. Among the biker community in Goa, this year,
only Franky Fernandes from Assolda, made it through the two day expedition and
was awarded a certificate on completion.“Last year because of Covid protocols there were no participants
from Goa and this year, I was the only one. I started my preparations for the
expedition almost six months ago. Before that, I used to ride solo to different
parts of India on my bike, Hero xpulse 200. I started practicing in my village,
the hill climb and riding on different terrains, mud, water, sand and rocks.
The event was like a rally, going through all the obstacles. I had to be ready
for all the challenges,” says Franky Fernandes, who has been riding for various
events since 2016.Considered as Western India’s biggest off-roading festival, over
the last eight years, the event has grown with participants from different
parts of the country participating in the expedition. For this edition of the
festival, they introduced new trails, a hill-climb and an enduro circuit to the
two-day festival.KTM Master and 8 Moto founder, Sangram Devekar Patil, was
excited with the response the expedition garnered with 40 cars and 350 bikes.
“It is an extremely exhausting expedition and we usually have it earlier in the
year by July. But this year, the monsoons were unpredictable and even after
delaying the festival till September, we had heavy showers a few days before
the festival. The crew and the registered members including medical and rescue
backup came up to 650 people. Additionally, there were many families and other
adventure lovers who attended the rally,” says Patil. Fernandes
shares his experience, “After registration, we had to go through scrutiny
process and the event started at 10am. Day one was about a 45 kilometres
off-road trail along the Panshet valley, Panshet dam backwaters, making way
through all the slush and mountains the participants had to reach to the end
point. Day two started with a challenging 70 degree inclined hill climb, where
most of the riders gave up. After the climb was done participants had to do a
hard enduro trail of five kilometres. The finishers of all the challenges were
provided with a certificate and a medal. Riders with all types of bikes were
present, from an 110cc Hero Honda Splendour to 450cc imported dirt bikes. The
trail was so mucky that only imported dirt bikes were making through it little
easily. For off-roading, the right tyres are a must. The experience was
amazing.”