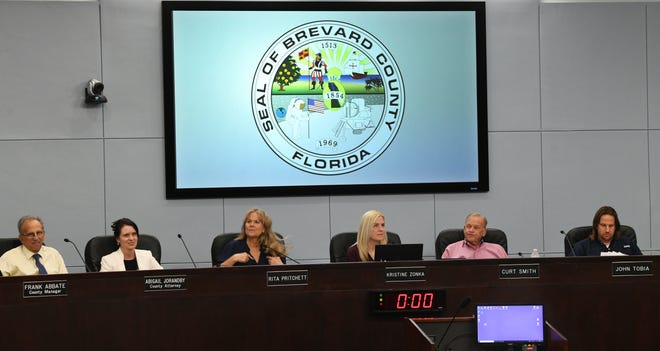 Brevard County officials will spend their remaining federal stimulus money from the COVID-19 pandemic to upgrade storm and sewer infrastructure, provide economic assistance to some people in need and draw up plans for new projects.

The commission voted last week to approve the second tranche of funding from the American Rescue Plan Act that Brevard received back in June. In total, the county received $58.5 million in June, almost $19 million of which has already gone toward other projects.

ARPA was passed in March 2021 to continue the investments spearheaded by the Coronavirus Aid, Relief, and Economic Security Act (CARES Act) in 2020.

Ian damage:Hurricane Ian’s messy message to Brevard County’s utilities: ‘Get your sewage together!”

“The county manager’s office met with staff in a variety of departments to look at potential projects that are listed under four categories,” County Manager Frank Abbate said.

Those conversations resulted in a recommendation list totaling almost $40 million in approved projects. The bulk of the appropriations, roughly $23 million, will be for infrastructure, particularly for water and sewer-related projects.

The public health department will receive $300,000 for a mosquito control and entomology lab and another $4.5 million of the ARPA funding will be for revenue replacement, funding three different concept plans, an animal hospital, and upgrades to the maintenance facility along Wickham Road and Bridge.

Of the $58 million that was appropriated last week. About $3.5 million of that total was earmarked to parks and recreation for capital improvements, leaving $2 million, less than 4% for affordable and workforce housing.

Brevard has received more than $220 million from the two ARPA aid packages, and although there were some strings attached, such as agreeing to assisting families with rent and food, local officials were given tremendous latitude for deciding how they actually wanted to spend the money. Both pieces of legislation were meant to assist communities suffering from the novel coronavirus pandemic.

Brevard received nearly $117 million in ARPA funding, separated into two buckets of about $58 million each.

Commissioners had already not only allocated all the money from the first round of funding received in May of 2021 but earmarked some of the anticipated second tranche funding as well.

Brevard used $12 million for the construction of a new emergency operations center, about $1.9 million for a property appraiser’s office, almost $3.6 million for coronavirus-related medical claim reimbursements, $1.2 million for a radio upgrade for public safety.

The accompanying recovery plan report focused almost exclusively on the money that commissioners approved in funding for the first round. Of the original $58 million, 75% or $44 million, was used to pay for water, wastewater, and stormwater projects.

Another $2 million was used to fund an incentive program to encourage employees to get vaccinated. None of the money, so far as it appears, was allocated toward the increasing issue of affordable housing.

Some in the meeting questioned the manner that commissioners used the money.

“In looking at the allocation of the ARPA funds, I find it interesting in one aspect that, you would expect that a lot of it would be directed to utilities with the sewer aspect,” said Sandra Sullivan, who lost the District 4 county commission primary contest back in August. “But a lot of it went to stormwater, which is natural resources, which already gets a lot of funding from the lagoon.”

“There is really some creative writing by the county commission here to put these under the umbrella of infrastructure,” she added.

Abbate disagreed, saying: “There isn’t any concern. We have had central services and budgeting independently look at each item. We have also gone through the county attorney’s office, who has also reviewed it, to ensure that we have everything properly categorized.”

There was some money left in reserve to deal with potential cost overruns, but Commissioner Rita Pritchett asked her colleagues on the commission to consider spending the money on “road health and capacity issues.”

Ralph Chapoco is government and politics watchdog reporter. You can reach Chapoco at rchapoco@floridatoday.com and follow him on Twitter @rchapoco.