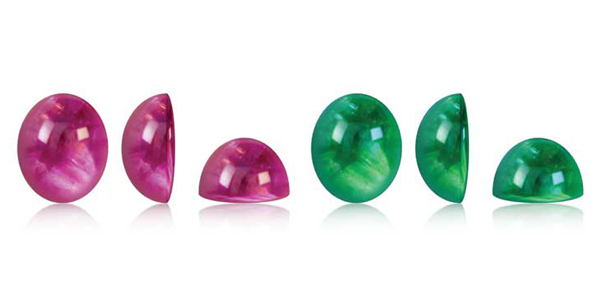 In response to a challenging couple of years, 2022’s fashion trends are leaning toward colours that are bright, happy, and (frankly) delicious. Reminiscent of candy colours, the 2022 spring palette brings us back to childhood joy and simple indulgence—which also seems to be a perfect fit for this season’s jewellery. Much like how everyone has their favourite flavour, there is a coloured gemstone for every taste, too.

Beyond the joy these gemstones evoke, there is a reason for how they get their colour. For jewellers, understanding the scientific causes of colour can add interest to a gemstone’s narrative and assist in building marketing campaigns. Further, knowing more about these mechanisms can also help in recognizing possible treatments and enhancements.

Colour is the aspect of any object that may be described in terms of hue, tone (lightness), and saturation. In physics, colour is associated specifically with the electromagnetic radiation of certain wavelengths of light visible to the human eye. In gemmology, gemstones and diamonds absorb and transmit certain wavelengths, giving them the characteristic colours that we see with our eyes.

As mentioned, there are three main elements that define colour: hue, tone, and saturation. This is based on the three-dimensional colour theory of the Munsell system, where hue (the colour) circles a central axis; the saturation (richness of colour) radiates from the centre outward; and the tone is on a vertical axis and determines the lightness and darkness of the colour (Figure 1).

In Pantone’s spring/summer 2022 trend report, the fashion colour authority identifies various pink and green hues. The luscious raspberry colour ‘Innuendo’ from its New York Fashion Week Report and fun pinks, like ‘Bubblegum,’ from the London Fashion Week Report can be found in pink sapphires’ range of tones and saturations. Meanwhile, for greens, colours like the bright ‘Cascade’ and more subdued ‘Basil’ are also trending. The gemstone world has a wide variety of greens to choose from, too, including emerald, as well as varieties of tourmaline, sapphire, and idiochromatic peridot (just to name a few).

Not only are these completely different mineral groups, but they are on opposite ends of the colour spectrum (Figure 3). Like raspberry and lime, they provide a contrasting balance that appeals to many tastes and preferences.

What pink sapphire/ruby and emerald have in common, however, is both are gemmologically defined by their colour. Ruby is defined as the red variety of the mineral corundum—any corundum other than red is called ‘sapphire.’ Thus, a slightly pinkish ‘ruby’ is not a ruby, but, rather, a pink sapphire.

Similarly, an emerald is defined as the green to bluish-green variety of the mineral beryl—any beryl other than a saturated green is not an emerald. A light yellowish green ‘emerald’ is actually a green beryl. So, it is not enough they are the right hue; they must also make the cut for saturation and tone (Figure 4).

Some define the colour of an emerald based on its trace element chemistry. Indeed, emerald can be differentiated from green beryl based on the cause of its colour, which is typically trace elements of chromium and/or vanadium.

Given, however, the constraints of the average jewellery professional and the level of difficulty in determining the chemical composition of a sample using standard equipment, the most common-sense definition of these gemstones is based on colour (i.e. using an emerald’s strong-to-vivid saturation and medium-to-medium-dark tone of green to distinguish it from the light-green colour of a beryl).

Speaking of trace elements, though, these two gemstones have at least one bit of chemistry in common: the primary cause of colour in both ruby and emerald is chromium (Cr)—specifically, the element in the Cr3+ electronic state (i.e. while chromium has 24 electrons, Cr3+ has three electrons removed from its outermost shell, giving it a net positive charge of three). So, how does Cr3+ cause emerald to be green and ruby to be red? This occurs because the chromium absorbs light differently when it is in beryl (emerald) versus when it is in ruby or pink sapphire (corundum).

Similarly, for many gemstones, the most common cause of colour is the presence of a small amount of a transition metal ion. In solids (including gemstones), these metals occupy interstitial sites, such as tetrahedra or octahedra. They are typically iron, chromium, vanadium, manganese, cobalt, copper, nickel, or titanium.

These transition metal ions have an incomplete set of electrons in what are known as the 3D orbitals. For the sake of the ‘colour conversation,’ the important thing to know is changes in the energy of these electrons correspond to the energy of visible light.

Perhaps you can see where this is headed: Cr3+ changes how the material interacts with light, and light equals colour when in the visible spectrum.

As mentioned previously, emerald is a beryllium aluminum cyclosilicate, while ruby is an aluminum oxide—meaning, each gemstone, inherently, has a different molecular geometrical arrangement. In emeralds, the Cr3+ is surrounded by six silicate ions, while the ruby has six oxide ions. The beryl molecules interact with the chromium more weakly and the differences between the energy levels are reduced, producing green.

What else is on the menu for the spring palette? How about another juicy silicate with purple and red overtones that can be found in everything from high-end designer jewels to fashion jewellery?

Amethyst quartz has the grape colour of Pantone’s ‘Dahlia’—a stand-out purple which exudes a dynamic vibe. Its yellow counterpart in quartz is citrine. The name comes from citrus colours in the range of orangey-yellow, as seen in Pantone’s ‘Daffodil’ shade. Pair these two gems together and you’re set to round out all tastes and flavours!

The mineral quartz is one part silicon and two parts oxygen (silicon dioxide [SiO2]). It is the most abundant mineral found on the Earth’s surface (12 per cent, to be exact).

While the cause of its colour is not fully understood, scientists agree about one thing: much like corundum and beryl, the colour of amethyst and citrine is thought to be caused by a transition metal: iron (Fe).

Whether quartz is purple (amethyst) or yellow (citrine) depends on the valence state of the iron. The two different valence states in play are Fe3+ and Fe4+. Citrine’s colour comes from the incorporation of very small Fe3+ aggregates in the crystal. Oxidizing the iron changes the colour of the quartz. To form the purple found in amethyst, natural irradiation from the rocks surrounding the quartz causes the Fe3+ atom to replace the silicon in the crystal lattice, which causes the formation of the FeO4 colour centre as Fe4+. This absorbs wavelengths around 545 nm or 357 nm, which we see as purple.

Not every quartz becomes an amethyst. For this to happen, a good amount of iron (100 ppm) is needed, as well as enough radiation to cause the purple colour.

Amethyst can be converted to citrine with the application of heat. Likewise, citrine change to amethyst through irradiation (Figure 7). Both of these changes can take place either naturally or through human intervention. Excessive heating, however, may change the distribution of the iron impurities at the different sites within the quartz structure, making it impossible to convert citrine back to amethyst by subsequent irradiation.

Now that you know the technical details of some of the best candy-coloured gemstones for the coming seasons, you can adapt, tailoring your customer conversations to satisfy gem geeks and fashionistas alike.

Understanding the cause of colour in gemstones can add credibility to a sales presentation and help build a more complete narrative for your clients. Remember, too: colour is like candy—it appeals to a variety of tastes!

Debbie Azar is president and co-founder of Gemological Science International (GSI), one of the largest gemmological organizations in the world and a distinguished leader in the global diamond and jewellery industry. She currently serves on the boards of the Jewelers Vigilance Committee, Responsible Jewellery Council, and Jewelers for Children, and is a member of the 24 Karat Club of New York. She has been featured in Forbes, Daily Mail, Bloomberg, and Bloomberg Businessweek, among others. For more information, visit gemscience.net.