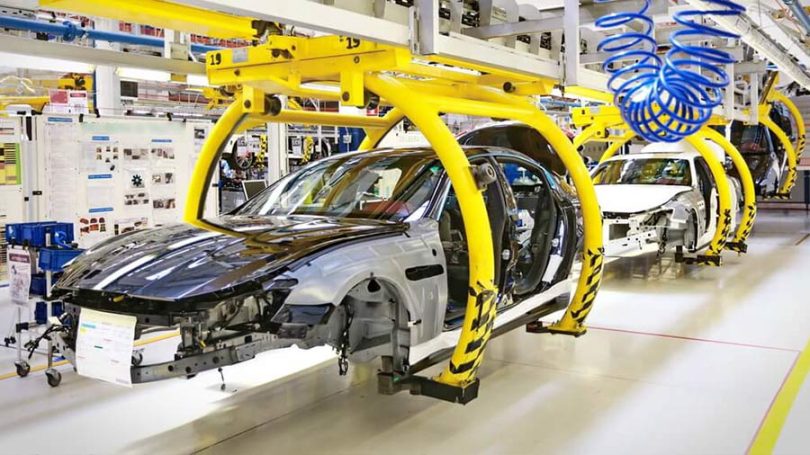 India’s automotive industry is at the cusp of another period of high growth, led by investments into elective vehicle manufacturing and focus on developing higher-tech capacity in the auto components and OEM space. Moreover, as geopolitics factor increasingly into production relationships between China and the West, India – as the world’s fourth largest automaker – could emerge a winner.

But, as tensions continue to rise between Beijing and the West, there is a very real risk that cars manufactured in China could face increasing market barriers to entry in highly lucrative markets in Europe and North America.

India – a nation with a huge working-age population, considerable capabilities in manufacturing, and a growing middle-class – and its automotive industry could benefit as perceived risk pushes manufacturers to find new production sites.

China’s automotive sector reportedly stands to gain from the introduction of sanctions against Russia. With Western companies leaving their operations in Russia, Chinese companies have been stepping in. However, Russia’s automotive production and sales have declined rapidly since the start of the war in Ukraine – and this highlights the impact of sanctions on indigenous production.

Chinese manufacturers, including NIO, XPeng and Li Auto, are also at the forefront of a technological revolution. These electric vehicle companies are rivalling Tesla and established European manufacturers on range, performance, and price, while pioneering innovative driver aids. For example, Nio’s vehicles are equipped with a gadget called ‘NOMI’ – through voice activation, it can open the windows, boot, and even take a selfie.

However, these premium EV brands, along with other Chinese companies and international firms manufacturing in China, need access to international markets to be able to scale up. Nio, for example, is starting sales of its vehicles in Germany, the Netherlands, Sweden, and Denmark in the second half of this year. Political risks, notably those related to sanctions, are also reflected in the valuation of Chinese EV companies when compared to their US peers.

There are also signs that international brands are becoming increasingly concerned about the longevity of their operations in China. In July, it was reported that Jeep owner Stellantis had closed its only Chinese factory. Chief Executive Officer Carlos Tavares said his company was implementing an “asset-light” strategy in China, highlighting concerns that rising political tensions between China and the rest of the world would lead to economic sanctions.

Recent reports have suggested that other manufacturers are following suit, or were planning to. A Honda spokesperson told Reuters that the company was “risk-hedging” when asked about moves to drastically curb production in China. The Sankei Shimbun – which did not highlight its source – said that Honda would develop two supply chains, one for China, and one for the global market – nearly 40 percent of Honda’s automobile production took place in China in the last financial year. Mazda is among other international companies reportedly mulling reducing production in China.

India’s automotive industry has developed, albeit slowly over the past decade – production in 2011 stood at 3.9 million cars, according to the International Organization of Motor Vehicle Manufacturers statistics. But that number greatly increases when the criteria is expanded to include three wheelers, two wheelers, and quadricycles. According to Invest India, some 22.9 million vehicles were produced from April 2021 to March 2022. That suggests India will be the world’s third-largest automotive market in terms of volume by 2030.

However, since 2017, a handful of automotive manufacturers, including General Motors, Harley-Davidson, UM Motorcycles, MAN Trucks (Volkswagen Group), Fiat, Eicher Polaris, and Ford, have shut their manufacturing facilities in India. Analysts suggest that many international companies set up facilities in India amid an anticipated boom in indigenous demand. However, the expected demand growth hasn’t been forthcoming and policy changes, including the introduction of 28 percent Goods and Services Tax (GST) on automobiles in 2017, has exacerbated these challenges.

The Indian market, moreover, is dominated by Asia’s Suzuki and Hyundai – with their small, low-cost cars consistently outperforming others in recent decades. As such, many brands with more expensive offerings have focused on exporting from India.

Despite relatively subdued domestic demand growth, there is evidence that India’s automotive industry may make big gains as it becomes an increasingly attractive option versus China.

It was announced in July that British International Investment, a government fund that backs foreign businesses, put US$250 million into a US$9 billion project run by Indian car maker Mahindra & Mahindra. The venture will see the development of battery-powered sports utility cars for the Indian market and for export.

Meanwhile, back in March, Japan’s Suzuki Motor, the majority investor in Maruti Suzuki India, said it planned to enhance its operations in India by investing US$1.37 billion in its Indian factory to produce all-electric vehicles and batteries. In a company statement, Suzuki Motor Gujarat Private said it will invest INR 31 billion (approx. US$406 million) by 2025 to increase production capacity for battery EV manufacturing and INR 73 billion (approx. US$956.53 million) for construction of plant vehicle batteries. Japan has plans to invest US$42 billion in India over the next five years, much of it in manufacturing. Other leading auto companies that have made commitments to invest in the EV space in India include Tata, which owns Jaguar Land Rover, at US$2 billion, and Hyundai US$500 million.

In July, it was reported that India had rejected a bid by Chinese carmaker Great Wall Motor to purchase a manufacturing plant from General Motors (GM). The Pune factory had been used by GM to produce cars sold in South America. the rejection by New Delhi could be due to a tougher attitude towards investments from China. That however leaves the market open to skilled plant workers and existing auto production facilities lying empty.

All this aside, if India’s automotive sector is to benefit from China’s misfortunes, it will need to attract more international brands, or encourage maturing of its auto supply chains, including through high-tech innovation.

To address such gaps in capacity and technology in its auto manufacturing ecosystem, the Indian government has implemented the ‘Production Linked Incentive (PLI) Scheme for Automobile and Auto Component Industry in India for Enhancing India’s Manufacturing Capabilities for Advanced Automotive Products (AAT)’ with a budgetary outlay of INR 259.38 billion (US$3.50 billion).

The PLI focus is on emerging industry capabilities, particularly India’s transition to clean energy, besides accelerating the country’s share in the global automotive trade (unit production and components sourcing). The PLI scheme will cover a period of five years from FY 2022-23. The base year for calculation of eligible sales upon which incentives will be disbursed is FY 2019-20.

What India offers foreign investors in the auto industry: Diversifying supply chain and an export-oriented production base

India offers low-labor costs, a technically trained workforce that is steadily upskilling, an industrialized economy, and less geopolitical risk than China. While international manufacturers with offerings more suited to the Western market may struggle to make headway in India’s domestic car market, it doesn’t mean they cannot establish a production base in India as a de-risk strategy.

Despite these concerns and considerations, Stellantis CEO Carlos Tavares is more bullish on India – recently saying that the firm expects India to be a profitable market and a bigger growth opportunity than the automaker previously anticipated.

Nevertheless, the areas of greatest opportunity in India are likely to be around manufacturing for export as well as OEM (original equipment manufacturing). The success of the MG ZS – which is the cheapest SUV in the UK market despite being well-equipped with technology – is a model that could prove fruitful with MG owner SAIC utilizing low-cost Indian labor and its access to Western markets.

MG is by no means the only company already manufacturing and exporting from India. In the 10 months to March, Volkswagen exported more vehicles than it sold in the Indian market.

Investing in India’s capacity build in the auto supply chain

OEM is an area in which the Indian government has been putting considerable emphasis. China’s auto-parts industry is worth a huge US$550 billion, against India’s US$50 billion. The automotive industry supply chain needs to be robust, and India’s relative geopolitical stability could facilitate growth in this regard.

While the loss of foreign car makers from India’s market in recent years does not bode well for OEMs who require indigenous demand as much as international market access,  the EV market presents a huge growth opportunity. To facilitate this segment and advance India’s higher tech capabilities in the auto supply chain, the Indian government has approved PLI incentives for 75 auto component makers (see full list here) and 20 OEM makers (see full list here).

(With inputs from Melissa Cyrill.)