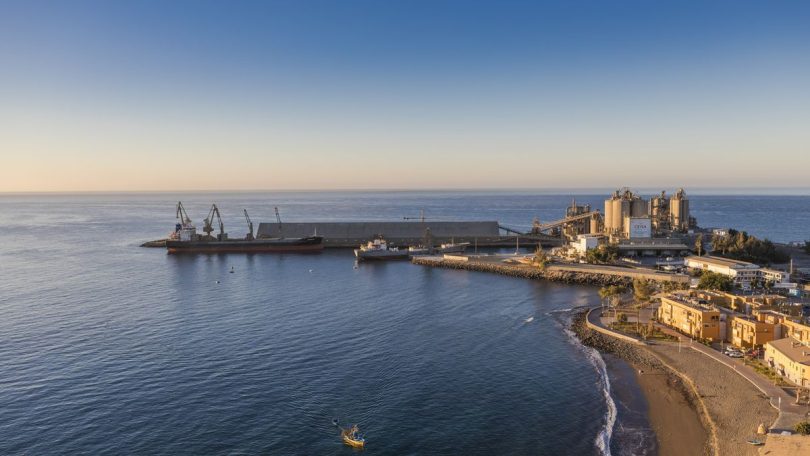 The Government of the Canary Islands set up a commission to examine the future of the port of Santa Águeda, on the south of Gran Canaria across the bay from Arguineguín, because the concession allowing the cement company to use the port is due to expire on October 22.  The commission’s conclusions are that the port be temporarily shared between tourism and industrial use, at least until the factory can operate in Arinaga, some time in the future. Something that will take a minimum of 6 years to organise, and likely more than 2 years to carry out, if everyone can agree.

Gran Canaria’s 2003 Urban Planning document designates this area for tourism use in the future. Canary Islands’ Minister of Public Works, Sebastián Franquis, explained that in the commission’s considered opinion this combined model is “coherent” with the “vocation” of the institutions of Gran Canaria, that the land surrounding that port become a place of “sustainable” tourism development, which the Cabildo (Island Council) will have to transform into a binding determination within the Insular Management Plan, subject to review.

The local town hall, however, have not yet modified their urban plan to make this area exclusively for tourism.  In the opinion expressed by Franquis, only by temporarily combining the port for duel use, industrial and leisure, can the San Bartolomé de Tirajana town hall urban planning be subsequently modified to align with the Cabildo de Gran Canaria; concluding that is how the conditions will be met to reach an “island agreement” on the future of El Pajar and the port of Santa Águeda.

The residents of El Pajar de Arguineguín, however, spoke out this Friday regarding the controversy over the future of the port and its uses. “We want to inform everyone that, after the press conference given today by the counsellor, we flatly deny that we agree with what they have decided,” said La plataforma vecinal “Salvar la Bahía de Santa Águeda”.

The Government of the Canary Islands committee, set up to deal with the future of this port recommends that its new use be temporarily shared, between tourism and industrial use, until the factory can operate in Arinaga.  The timescale for which they say will be set by necessary modifications to urban planning near the Arinaga port, which could itself take up to 6 years.  It could take at least 2 years to move a factory of that size to the Arinaga deep water port, but even if that were agreed there has thus far been no alternatives put forward regarding where they would source their raw materials, much of which currently come from a lime quarry, just two kilometres from El Pajar, in the Barranco de Arguineguín valley.  Even if all of this were resolved, and the cement company agreed, we would be looking at a minimum of ten years before any real change can occur.

Despite the optimism expressed on Friday regarding this proposed agreement, which the Puertos Canarios (Port Authority) body must adopt in due course, the Minister has admitted that what has to be negotiated now, since there is no consensus, is for what period the temporary extension of industrial use will last, as they propose giving an extended concession in favour of the cement company CEISA, so that they can continue operating in the port of Santa Águeda, when the current concession expires on October 21.

Franquis has insisted that it is about looking for “the best solution for the island”, that is, one that respects “the public interest” and “does not modify the way of life of the residents of El Pajar”, so, before the current concession to the cement company comes to an end, a “fair” period of time will have to be set so that industrial and tourist activities can coexist for awhile, with plans to develop a marina for between 150 and 200 berths.

That time horizon will be determined, he said, by the time it takes for the Gran Canaria administrations to modify their respective urban planning documents, which will not be less than six years, and will also depend on the availability of land around the deep water port of Arinaga, in which to install the cement plant as close as possible to the dock, something that, according to the Port Authority of Las Palmas, will not be viable before 2028.

Sebastián Franquis underlined that the recommendation formulated by the commission is based on the conclusions of five sectorial reports in which the viability of the various possible scenarios has been studied, some studies that have taken into account the impact of mixed use of this port from the economic, social, environmental, territorial and public health points of view.

For their part, the town’s residents say they will continue to fight “against urban-tourist speculation.”

”And of course for our people to stay as they have been up to now. No more no less. And of course we want CEISA to continue with us, as well as the sector that has recently been installed in the area. What we are not going to allow is that the future of our people is put at risk,” they stressed in a statement.

“Let’s save our town from the tourism destruction that they want to carry out here when they take away the cement factory,” they concluded.

For its part, the company Cementos Especiales de las Islas (CEISA), responsible for the cement factory in the  Port of Santa Águeda,  has denied this Friday that it is going to move its factory on the simple basis “it carries out its activity on its own land”.

The Minister has assured that all the parties affected by this change in use for Santa Águeda will have to “agree”, despite the fact that they have “conflicting interests, for which it would be good to reach a good agreement”, in which “the protection of employment and the productive fabric” of Gran Canaria is seen as paramount.

The regional government report, from which they are working, has contemplated up to seven potential scenarios for the future of the port of Santa Águeda, when the concession held by Cementos Especiales de las Islas (CEISA SA) runs out in October of this year. The industrial company aspires to renew their permit for another 25 years to manage the dock, a concession it has held for 65 years, while various entities in the tourism sector are demanding recreational use for a port that, they emphasise, is located in one of the unexploited jewels on the island’s sunny southern coast.

The president of El Pajar’s Neighbourhood Association, and spokesperson for ‘Save the Bay of Santa Águeda‘, Antonio Juan Mariano Trujillo, launched their campaign earlier this year by saying “the platform was created with the aim of conveying to the public of Gran Canaria the destruction that is projected for a beach that has thousands of users from all corners of the island. We are not willing to put up with pressure from anyone, we do not want to give up our way of life and that is why we are going to knock on whatever doors are necessary to make them understand that El Pajar de Arguineguín is not for sale”.

Their campaign to keep the port in the hands of the cement factory has, they say, already gathered more than 20,000 signatures, nearly 3,000 of them online.