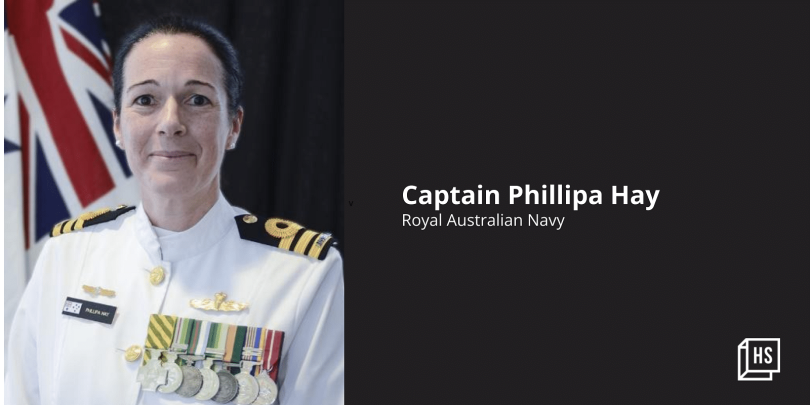 Captain Phillipa Hay joined the Royal Australian Navy (RAN) in 1993 at HMAS Huon, Tasmania and graduated from the Australian Defence Force Academy in 1995. During the seaman officer training, she was selected for the US Navy Exchange and deployed in USS John Young (DD-973) as part of the Middle East Force.

In 2010, Captain Hay joined HQJTF639, the Australian Defence Forces contribution to maritime security, where she was awarded a Conspicuous Service Cross for her role as Director of Operational Plans.

In 2015, she was appointed Executive Officer of naval base HMAS Coonawarra and joined the Fleet Battle Staff where she was promoted to Commander and Chief of Staff in August 2018.

Captain Hay has a bachelor of science degree (double major in chemistry). She also has a graduate diploma in education. She is a graduate of the Institute of Company Directors, a graduate of Next Generation Female Executive Leaders, and a passionate advocate for not-for-profit boards and sporting organisations.

She was recently in India, at Visakhapatnam, as part of the Indo-Pacific Endeavour, one of Australia’s key regional engagement activities.

In an email conversation with HerStory, she traces her career in the Royal Australian Navy and talks about the challenges as a woman in uniform and more.

Edited excerpts from the interview:

HerStory (HS): Can you tell us about your growing-up years?

Captain Phillipa Hay (CPH): I grew up in Hobart, Tasmania. Hobart is on the Derwent River, the gateway to the Southern Ocean, and is famous for being the finish line for the ‘Sydney to Hobart’ yacht race.

Sailing, be it in dinghies, racing yachts or cruising, is very popular, and competitive in Hobart. I went to ‘The Fahan School’, a fabulous all-girls school whose founders believe in educating girls to the highest of standards across humanities, sciences, mathematics and languages. Sports and outdoor education played a huge role in our school life. I was, and remain, involved in summer and winter sports of all kinds, with a love of field hockey. I used to be a striker. These days I’m built for tactics, not speed, so prefer being a fullback.

HS: You hail from a seafaring family. Can you tell us about your experiences of travelling since the age of ten? And how did this shape your personality and broaden your horizons?

CPH: My parents had a 42ft yacht, which my father built. We spent weekends racing and nearly all holidays on ‘Beyond’. When other families would drive or fly to a destination, we would sail. As a teen, I skippered a 12ft dinghy, with a crew of two boys. Of the 13 dinghies in the squadron, I was one of only two girls who sailed and the only female skipper. My first year was brutal. I capsized nearly every race because my crew was too light, the winds too strong, and I didn’t know how to manage the boat properly. We retired from more races than we finished. At the end-of-year prize night, I received a prize—a toilet seat, for the most capsizing. So, after that first disastrous year, I had to take stock and get back on track. I spent the pre-season taking the boat out with just my father and I, learning, listening, and training. By the end of the second year, I was finishing all races and even managed a few places (much to the horror of the boys!).

Sailing is both exhilarating and tough. You are subjected to the weather and the icy southern sea and have to face challenges like rigging that breaks, capsizing, tangled sails, and collisions (thankfully only in dinghies!) all the while keeping your crew safe, motivated, working tactics, watching the other racers, and ultimately trying to win. At the end of the race, you come in, cold, tired, and have to unrig the boat, wash down, pack up, and hope that there is still hot water left in the showers.

All the lessons I learnt sailing I apply to my life. Never give up. Face the challenges, and keep going until you cross the line.

HS: What prompted you to join the Royal Australian Navy (RAN)?

CPH: I joined the Navy as a 17-year-old and went to the Australian Defence Force Academy. Clearly, my life associated with the water made joining the Navy an easy choice. I love being in the ocean, adventure, challenges, and working in teams. Navy ticks all those boxes.

HS: Take us through your career in the Navy.

CPH: At The Defence Academy, I studied chemistry along with my military studies. On graduation, I spent the next two years studying navigation and seamanship to become an officer of the watch and the second-in-command of a patrol boat and a high-speed catamaran (definitely a highlight of “sailing” at 42 knots).

I have done roles in training, future military capability, operations ranging from peacekeeping to border security, and exercises, and operated with nations from around the South Asian region out into the Pacific. The highlight is serving with the most incredible, young, smart Australians, who all volunteer themselves to serve, and going overseas to interact with other navies. There is a common bond between those who wear a military uniform, and it’s an honour to be part of it.

At the moment, I am the Commander of the Australian Amphibious Task Force. Along with the Australian Commander Land Forces, Colonel Doug Pashley, we have the privilege to lead the formation, preparation and operation of the Australian Amphibious Force. It is immensely satisfying to see ships, aircraft, landing craft, sailors, soldiers and aviators working together to generate a coherent amphibious force that can be deployed into the region to conduct a range of missions from humanitarian assistance, to evacuations and security operations.

HS: You are the first Australian woman to be appointed to command a multinational naval force in the 50-year history of complex war-fighting exercises off the US coast. Can you tell us more about it?

CPH: Being Commander Task Force 1 at RIPMAC 2020 gave me the opportunity to lead multiple task groups from so many different nations, across multiple platforms. It was complex, chaotic and challenging and was a huge privilege.

HS: Can you tell us about your current visit to India as part of the Indo-Pacific Endeavour?

CPH: Indo-Pacific Endeavour is Australia’s flagship regional engagement activity. The activity is aimed at further strengthening important relationships and building whole-of-government partnerships. Here in India, the Task Group and Indian Armed Forces will participate in activities and joint training exercises in the areas of maritime law, humanitarian assistance and gender, peace, and security, as well as military engagement. Strong cooperation, understanding and trust, and the ability to work with security forces of the Indo-Pacific are critical to supporting an open, inclusive and resilient region, with ASEAN at its core. Australia is committed to working with our Indian partners and building relationships across government.

HS: As a woman in uniform, what are the biggest challenges you have faced so far?

CPH: When I joined at 17, I embarked on the well-structured training pathway to command. Women had only been serving at sea for a few years, so life at sea was not always pleasant for the few out there. Thankfully, there were plenty of men who could see that women were just as capable at serving at sea as men and supported us.

I had no deviations from sea life until I reach 30, when all at once I was married, pregnant, promoted and selected for command. That was not in the Navy recruiting brochure! Since then, the biggest challenge has been two-fold. Debunking the ‘work-life balance’ myth. Balance means giving either side equal attention or effort. I have found that, over the course of a day, week and year, I need to constantly set my priority to either family or work, but it is never equal apportionment.

The second challenge has been advocating for change to policies that needlessly impede a woman’s ability to serve, particularly with a family. Simple things like not having to do a fitness test until 12 months post-partum being able to access childcare close to work, all alleviate a stress that distracts you from serving fully.

HS: What more can be done to attract and sustain women in the armed forces? What are the challenges in their path?

CPH: Women put on a uniform and want to serve. They want to be valued and know they are making a difference. By removing nonsensical policy impediments, you will get the best out of your people. Policy change can be slow and requires advocating. It necessitates brave hierarchy to commit to change, and not just talk the talk, but walk the walk.

HS: You are also a passionate advocate of not-for-profit boards and sporting organisations. Can you tell us more about this aspect of your career?

CPH: Giving back to the community is highly rewarding and enjoyable. In a world where volunteerism continues to wane, there is nothing more enjoyable than to watch an organisation progress.