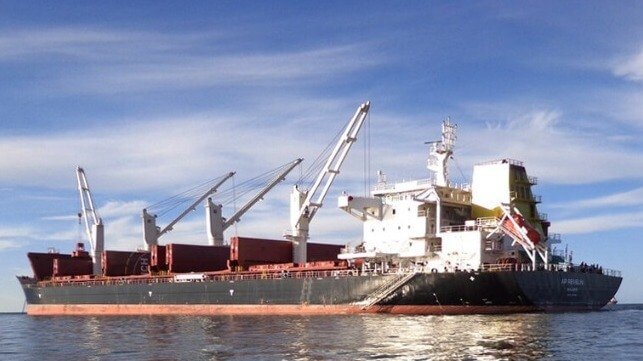 A general cargo ship inbound for Port Arthur, Texas, and an outbound bulker collided on Sunday, August 21 causing significant damage to both vessels. According to the U.S. Coast Guard, the accident occurred in the Sabine Pass, a narrow shipping lane along the Texas-Louisiana border leading between Port Arthur and the Gulf of Mexico.

The 18,000 dwt general cargo ship Damgracht was inbound from Italy transporting a cargo of cement. The 13- year-old vessel sailing under the flag of the Netherlands had been authorized to move from the anchorage where she had been for several days into the port. During the inbound maneuver, a U.S. Coast Guard spokesperson reports that an engine alarm sounded on the vessel, and the engine shutdown causing a loss of steering.

Outbound from Port Arthur was the 38,700 dwt bunker AP Revelin. The bulker registered in Croatia had loaded a cargo of wood chips and was departing for the Immingham port in Great Britain.

AP Reveling sustained structural damage in the collision. Her owners, Atlantska Plovidba based in Dubrovnik, reported in a stock exchange filing that the vessel sustained “significant material damage,” and that they believed it will result in a significant loss in “usable ship time,” while repairs are undertaken. A news outlet in Croatia carried unconfirmed reports that a water tank on the bulker was damaged and her rescue boat destroyed.

There was no loss of life or injury in the accident to the crew aboard either vessel and no pollution in the waterway. Both the U.S. Coast Guard and National Transportation Safety Board have begun investigations into the circumstances leading up to the collision.

Both vessels remain in the Sabine Anchorage undergoing damage assessments according to a U.S. Coast Guard spokesperson.