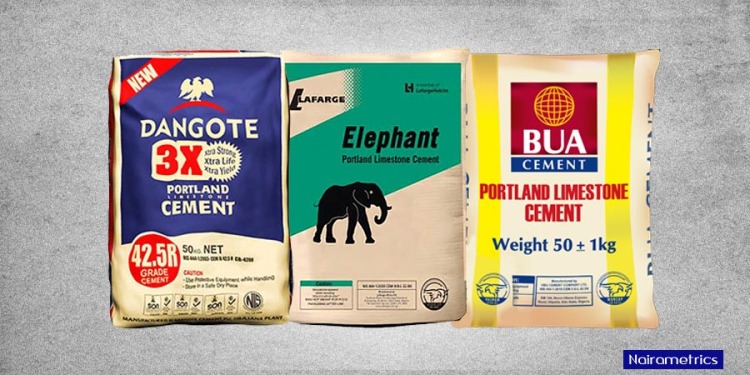 Three cement companies listed on the NGX raked in N1.709 trillion worth of revenue during the nine months that ended September 30, 2022, representing a 19.68% growth over N1.428 trillion reported by the companies in Q3 2021.

This is according to information gleaned from the unaudited third-quarter financial results of the cement companies, namely Dangote Cement Plc, BUA Cement Plc and Lafarge Africa Plc.

The 19.68% revenue growth was despite the cost pressures faced by the companies. Nairametrics understands that said cost pressures were due to the depreciation of the naira and macroeconomic inflationary pressures, especially in the domestic market where the average inflation rose between January and September to 20.77%.

Cement profits: According to data tracked by Nairametrics, the combined profit after tax of the cement companies for the period under review declined by 13.66% to N332.014 billion from N384.550 billion in Q3 2021. And this was due to the rising cost of sales which swallowed much of the earnings. The companies’ cost of sales for the nine months stood at N761.738 billion against N620.128 billion in 2021, a 22.83% increase.

Breakdown of analysis: A closer look at the financials showed that Dangote Cement Plc maintained a lead in revenue generation, followed by Lafarge Africa Plc and BUA Cement Plc.

Cutting cost measures: High energy cost was one of the drivers of the companies’ cost of sale during the period. Nairametrics detailed how Dangote Cement and BUA Cement incurred N263 billion in fuel costs over nine months. Meanwhile, the companies have since began adopting alternative measures to cut down energy costs.

The Chief Executive Officer of Dangote Cement, Michel Puchercos, explained that to checkmate the impact of high energy costs, the group is strengthening its efforts to ramp up the usage of alternative fuels.

The Chief Executive Officer of BUA Cement, Mr Yusuf Binji, said during a conference call that the cement maker has resorted to using locally sourced coal and liquefied natural gas in favour of imported coal to withstand the stress in the foreign exchange market.

The Corporate Affairs Manager of BUA Cement, Mr Otega, in a report cited by Nairametrics said:

Forex impacted costs: Khaled El Dokani, CEO of Lafarge Africa noted that in Q3 2022, the company’s Net Sales improved by 12.2% over Q3 2021. He added that the worsening exchange rate situation impacted the firm’s cost of sales, specifically key supplies indexed to the U.S dollar. He said: